An odd week’s running largely due to the weather – with wave after wave of heavy rain and very strong winds. I had planned to do a cross country race on Saturday but my legs were just too tired. It did mean though that I could have a more leisurely run on the South Downs just north of Brighton in sun and light winds – it proved to be the right decision.

I took in the beautiful Sikh War Memorial, high up in the Downs. The Chattri memorial is to Indian Sikhs who had fought in WW1, the wounded ones had been brought back to Brighton to be treated and those that didn’t pull through were cremated and remembered in a beautiful and peaceful location. 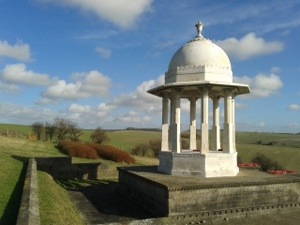 There was little respect shown to the memorial by the British Army in WW2, being used for shooting practice and badly damaged. It has been repaired since and a visit to it alone would have made the run special. 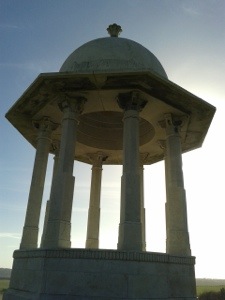 Then it was on to the Jack And Jill windmills …

……. and then along the escarpment to Ditchling Beacon before heading back towards Brighton, due to the chalk rocks underneath there wasn’t too much mud either. The best 10 miles of 2014.

My long run of the week was due to be on Wednesday afternoon along the Thames Path, it was a run I was really looking froward to but a quick glance at the weather forecast on Tuesday morning, with threats of torrential rain and 22mph winds (with gusts of up to 50 mph) made me have a rethink.

Despite brisk 8 miles on Sunday and some reps on Monday, I had to get my long run in on Tuesday evening. It was really hard going as a result, but I really didn’t help myself though, including the high hills around the Horniman Museum along with 8 or 9 significant others. I tired badly at the end and cut out a mile or so, but looking at my watch on Wednesday morning the 18.5 @ 8:34 wasn’t too bad.