There was an explosion at around 10:15 pm on Tuesday 14 August 1894 at the then Post Office at 177 New Cross Road – today a nondescript shop front.

A man was seen passing the Five Bells pub, about 30 metres from the Post Office, carrying a small parcel, then hurrying away down Hatcham Park Road soon after and followed by a small explosion at the Post Office. It caused ‘considerable noise which greatly alarmed those in the immediate vicinity.’ (1) 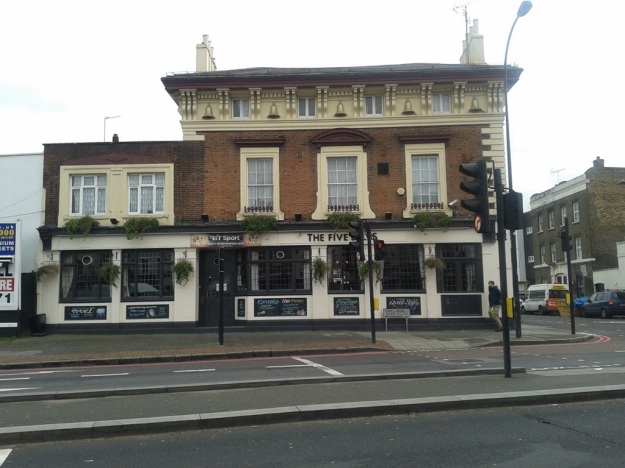 At the Post Office, the police had found the remains of a tube upon which were written (2)

All were well known anarchists who had died or been imprisoned as part of their activities – Bourdin had blown himself up, probably unintentionally in Greenwich, this was covered in Running Past in 2014; Vaillant had been responsible for the bombing of the French Chamber of Deputies.  So it was rather odd that it was reported that ‘the authorities do not entertain the theory that the explosion was the work of Anarchists.’ (3)  Some press reports though did make the clear and obvious linkage – referring  to it as an ‘anarchist outrage’ (4).

This wasn’t the only Post Office explosion in south east London in the 1890s – there was another in Lewisham High Street in January 1896. The small post office ‘filled with smoke and the smell of gunpowder was noticeable.’ While fittings were damaged by the ‘sardine tin shaped bomb’, there seemed to be no structural damage.  The perpetrator was described as a ‘dastardly scoundrel’ and the Illustrated London News hoped that a ‘heavy punishment would be meted out to the bomb ruffians’ (5).  There was no mention of anarchists at all on this occasion, despite press reports linking it with the New Cross bombing.

This approach continued after the forensic results were made public – when it was reported that ‘The authorities at first thought that the outrage was the work of an anarchist. They now believe that it was committed by some imbecile or other irresponsible person.’ (6)

This official line didn’t seem to help the police with their inquiries, there was a further attack on a Post Office on Trafalgar Road in East Greenwich in January 1897, which seems to have received little publicity at the time (7).  However, it appears that the police started to infiltrate the relatively large Deptford anarchist group who met at Deptford Broadway – their meetings occasionally got mentions in the left leaning Reynolds News (8).

These meetings led the police to a watchmaker, Rolla Richards (the court reports incorrectly call him Rollo), who had been heard talking about effectiveness of different explosives in late January 1897 and they raided his home at 136 Edward Street in Deptford.

Gunpowder and various other bomb making equipment was found at Edward Street (pictured, left (9) and Richards was charged with ‘Feloniously causing an explosion by gunpowder on August 14th, 1894, likely to endanger life.’ Initially he was changed with all three explosions but the Old Bailey record only covers the New Cross Road charge, although it notes that ‘There were two other indictments against the prisoner for similar offences.’.

Richards was linked to the New Cross explosion by pieces of card and paper from the parcel bomb, more of which was found at Edward Street A handwriting expert identified some of the surviving fragments of writing which were quoted above as being in the ‘hand’ of Richards,

It was clear from his trial that Richards had some mental health issues and/or some learning disabilities – he was described several times  during the trial as ‘eccentric’ and was ‘confined as a lunatic for nine months in 1883-84 in the Greenwich Infirmary.’

Richards, pictured above from a sketch at his trial (10), was sentenced to seven years hard labour, which according to 1901 census records he spent at Parkhurst Prison on the Isle of Wight – where he was described as ‘feeble minded.’

He was released on a conditional licence in 1903. He seems to have moved to the Bromley area on release, he married Emma Jane McNeale there in 1904.  They were living in Melrose Road in Biggin Hill in 1911, although neither were working, in previous censuses this would have been described as ‘living on own means’.

The Richards  next door neighbour was William Nelson, a professional photographer, who captured Rolla Richards on film – he was, at best, seen as somewhat eccentric – as the photograph with a tricycle and a cat on his shoulder at least implies. The mental health problems that came out during his trial, in the 1901 census as well as the 1881 census where he was described as an ‘invalid ‘seemed to have re-surfaced in Biggin Hill.  Stories of him attempting to burn down the Nelson’s home have been passed down through that family’s history.

He died in 1929 in the Bromley area and someone of the same unusual name bequeathed £500 to provide bells and a clock for the tower of St Peter & Paul, Cudham.

The bequest was part of an estate valued at £1672. Where the money came from is a mystery.  As a watchmaker recently out of prison he is unlikely to have earned sufficient money to retire by 1911. He had married in 1904, his wife, Emma was a recent widow – her husband died in Greenwich in 1902, but as he was listed as a lighterman in the 1901 census, he is unlikely to have been wealthy.

It is much more likely to have been inherited from his father, William, who was listed as a widower living on his own means in the 1901 census, after being a Cooper in the previous two censuses. William died later in 1901.  If this is the case he too must have inherited the wealth, being a cooper is unlikely to be trade generating enough to retire on.

Census and other related data are from Find My Past.

Thank you to John Nelson for allowing me to use the photograph that his father took as well as filling in some of the details of Rolla Richards’ will and life in Biggin Hill.