Like other bloggers who have passed by (The Greenwich Phantom and Caroline’s Miscellany) I have often wondered about where the name ‘The Antigallican’ originated – most recently when I ran past during the London Marathon, which the hotel always seems to support. 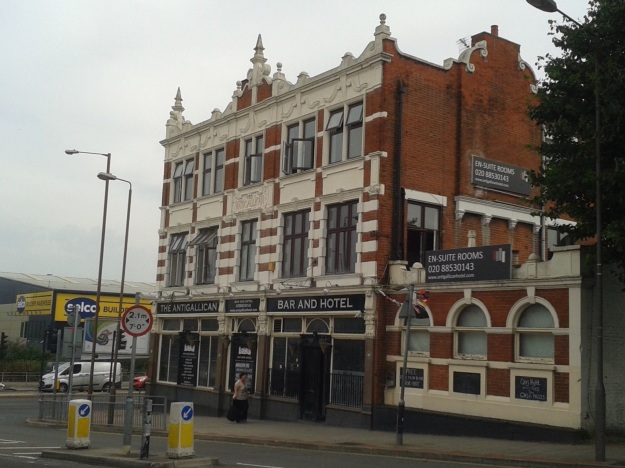 The Anti-Gallican Society was formed around 1751 as a pressure group come dining club opposed to the influx of French goods then coming into England, and the discouragement of the creeping influence of la mode Française.

It seems to have had pretensions in terms of the target group of the membership – ‘Gentlemen of the best characters and address, none being admitted but persons of reputation and loyalty.’ The Grand President wore a rather impressive looking badge of office which is now at the British Museum.

From 1751-54 the Society offered prizes for goods such as lace and needlework manufactured in England along with a few other stranger ones including
· In 1753 a medal was presented to Captain John Mead, “for having caught the greatest number of whales last season,”
· A medal to Captain Cockburne “for his gallant behaviour to the commander of the French squadron at Annamobar, on the coast of Guinea;” and
· A grant of five guineas to “an honest, industrious old couple” whose cow had died from “the distemper.”

With the start of the Seven Years (that went on for Nine) War, the Society seems to have decided to do their bit for the Imperialistic war effort and seek to make some money in the process and go into privateering – Government backed piracy.

A ship, called the ‘Farnborough’ but unsurprising renamed “the Antigallican” was bought by the Society in 1757 in Deptford. It was previously owned by a Society member who was conveniently trying to sell when the idea of privateering was first mooted. It was a 440 ton man-o-war, and its previous usage was euphemistically called the ‘Jamaica Trade’. The first recorded voyage in its new guise, after being heavily armed, was on 17 September 1757, from Deptford to ‘Hope’ which it left on 22 September heading for Margate. The Society lived up its values in fitting it out, as it carried

“Six months’ provision, all of the product of Middlesex and Kent, generally supplied from the estates of the proprietors. There was not the least thing in or about her but what was entirely English.”

I had hoped that the ‘The Hope’ could refer to Anchor and Hope Wharf which would then have been within sight of the current location of “The Antigallican”. Sadly, it was Lower Hope Point – the point on the Kent Marshes, near Cliffe, which marked the seaward limit of the jurisdiction of the Company of Watermen and Lightermen and now the limits of the Port of London Authority. .

Ten days out of Margate it appears to have had its first privateering success as it took the Maria Theresa, a ‘merchantman carrying coffee, sugar and cotton. She had a crew of 30 and had 4 British prisoners on board’. Five days later a snow from Bordeaux was its next successful target, ‘laden with wine, bale goods, pitch and distilled water valued at £15,000 and carried her into Madeira’.

Its third, and final, foray was to capture French East Indiaman ‘Duc de Penthievre’ off Cadiz on Boxing Day 1757. The captured ship and cargo were worth £300,000 (around £39 million at today’s prices) and became subject to a protracted dispute in Spain which ultimately led to the loss of both ‘The Antigallican’ and its ‘prize’. The Society itself seems to have disappeared by 1759, possibly as a result of the Duc de Penthievre debacle.

There a couple of less likely possibilities too as to the name – there was another privateer named the Anti-Gallican of which there is a song about, but this was fitted out, crewed and owned in South Shields where it sailed from in 1779, so seems unlikely.

Finally, there was a publication produced by Lewis Goldsmith – ‘Anti-Gallican Monitor and Anti-Corsican Chronicle’ – Goldsmith was a writer who was for a while in the pay of Napoleon with whom he fell out and returned to England. Goldsmith published the Anti-Gallican Monitor from 1811 to 1825 (renaming it the British Monitor in 1818) it ‘combined prose works, poetry and a few illustrations in a publication which aimed at arousing British patriotic feeling against Napoleon and the French’ – there is nothing obvious linking the publication with the Charlton area though.

Whatever the history of the reasons behind the name, the hotel is a little more tolerant of non-locals these days than its name would suggest, it is the watering hole of away fans visiting The Valley.

3 thoughts on “Piracy and the Charlton Hotel”