Today, 13th October 2014, is the 130th anniversary of the a decision at The International Meridian Conference in Washington in 1884 which led to

the adoption of the meridian passing through the centre of the transit instrument at the Observatory of Greenwich as the initial meridian for longitude.

The line is well known and a tourist attraction at Greenwich, although it was 4th in a series of ‘lines’ ‘drawn’ at Greenwich – the first by Flamsteed, the first Astronomer Royal, was 7.75 metres to the west. The blog has been there before with an unsuccessful anarchist attempt to blow up the Observatory. 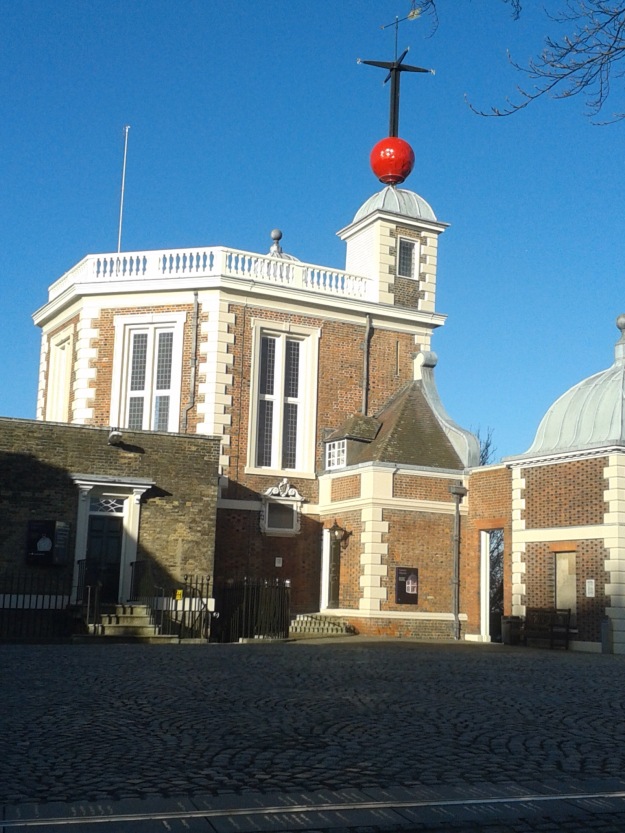 While the Observatory would be an obvious place to start, I am going to resist logic and run my way back from the southern edge of London following as close to the Prime Meridian as possible, taking in a transect of the city. Fittingly, our starting point is another invisible and artificial construct – the boundary between Croydon and Surrey. Our starting point is a footpath (roughly where the large tree on the left is) around 100 metres west of a road called Park Road, remarkable only for its absence of a park. Oddly though the footpath had been tarmaced in the dim and distant past, the reasons for this became clear within 50 metres – there was a sign to Greenwich via National Cycle Route 21, a route I run down, further to the north, several times a week. 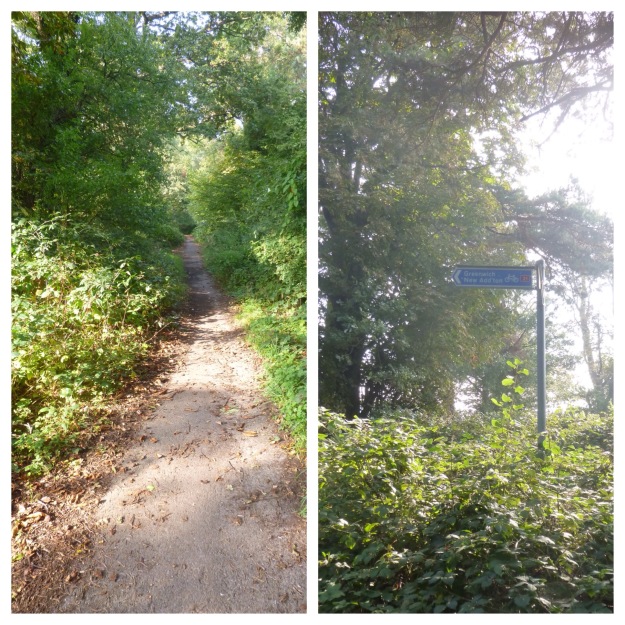 The Prime Meridian is no respecter of rights of way and heads north over school playing fields. Our first turn to the north is a footpath more or less parallel to an old Roman road that went from London to Lewes – while there have been a few Roman coins found in the area, there is little to get excited about. Our first obvious sign of the meridian is a sun dial at the front of Addington High School, which was first installed in 1953 and re-furbished about 5 years ago. It is a great idea that would be even better if it wasn’t partially under a tree and had an upright that looked less like a bit of left over piping. There is an online ‘guide’ to the various meridian markers that helped identify this, and many of the others en route back to the Observatory.

The meridian skirts the eastern edge of New Addington, which is an odd peninsula of development sticking out into the greenbelt; its development as Croydon overspill started in the 1930s through the First National Housing Trust which bought a couple of farms with the intention of developing a village based on Ebenezer Howard’s Garden City principles including 4,400 homes centred around a village green.

WW2 interrupted the growth of New Addington, and post war Croydon Council developed the estate further bringing a lot more homes than were originally intended, some light industry and eventually decent public transport links through the Croydon Tramlink in 2000 which reduced its isolation.

Some of the industrial units are more or less on the meridian and are imaginatively called the Meridian Centre on Vulcan Way. Originally, I had intended to at least ‘pop-in’ to one of the units which is home to probably the closest brewer to the ‘line’, CronX, which is part owned by a friend. However, despite being only a mile or so in to the route, I was already way behind time and in any case drinking and running aren’t the best of bedfellows, particularly for runners like me with clumsy feet.

Being surrounded by greenbelt, the route away from New Addington is rural; I am very tempted to follow the path suggested in the Greenwich Meridian Trail guide through woods and fields towards Coney Hall. I know the path quite well, in the opposite direction, as it is the first couple of miles or so of a cross country ‘mob match’ route I run most years. However, my aim is to stay as close to the meridian as possible, so after a brief run across some fields, I picked up a lane into the inter-war suburbia that is Coney Hall. One of the roads passed is rather tempting to turn down given its name, although I resist the temptation….

Like New Addington, Coney Hall is an enclave of 1930s housing, built on a former farm sticking out into the greenbelt, however, that is where the similarity ends – Coney Hall is Mock Tudor suburbia with its half-timbered gables. It foreshadows much of what is to come for the next few miles.

I should have resisted a minor detour to the west of the meridian, but there is a rather attractive Grade II* listed 15th century church – St John the Baptist – which stands on a hill overlooking fields. Almost next door is Wickham Court – an old manor house of a similar age and with links to the Boleyn family, glimpses of what is now a fee paying school are possible through the trees.

Along the crest of the same hill as St John’s there is a marker of the meridian, an odd little obelisk, like a small Ordnance Survey triangulation point..

In 1997 there was a rather grandiose scheme to plant a series of trees to make the meridian visible from the air. While it wasn’t an enormous success, Bromley was an enthusiastic adopter of the scheme though and offered trees and a large scale map to residents on the ‘line’. Unfortunately, there was neither a requirement to actually plant on the ‘line’ nor to mark the tree – so the trees that have survived are largely indistinguishable from any others.

There were a couple planted a little further up in hill in Coney Hall, but both are long gone; but through the parkland and into South Walk one of the two planted there remains with a large tudorbeathan backdrop (see above).

The roundabout on Glebe Way is almost crossed by the meridian according to the Guide, but then it is ‘tacking’ across footpaths and roads looking for our next marker or in fact two of them. There is a sundial and obelisk on the edge of the grounds of Hawes Down Junior School which are now around 60 years old and rather attractive, although difficult to spot through the quite dense boundary hedge.

There is conveniently a bridge over the railway, a short distance from its terminus at Hayes which opened in 1882. Hayes is an old village, with an attractive church, St Mary the Virgin, which has parts going back to the 15th Century. The village had links to the Cade Rebellion of 1450 but the nearest to rebellion around here these days would be a vote for UKIP, with the Tory vote approaching 60%. Sadly, we see nothing of old Hayes, it is the best part of a mile from the bridge – this is very much suburbia here.

Our next marker is still in mock Tudor territory but noticeably the houses are smaller here than in Coney Hall, it is at the end of a terrace rather than the large semis ¾ of a mile to the south. While the tree is now but a stump the owners have marked the passing of the Prime Meridian with a sign.

While I run on onwards and northwards, there is nothing else in this borderland between West Wickham and Hayes to indicate the passing of the Prime Meridian through the kitchens and lounges of commuter land. It is an area I know fairly well at night – these are streets I sometimes run along with my running club – but during the day they seem unfamiliar, unremarkable and unaffordable to most.

Crossing over that main artery of many a Beckenham Running Club route, Pickhurst Lane, there are several more of Bromley’s meridian marking trees in the leafy avenues towards Shortlands. 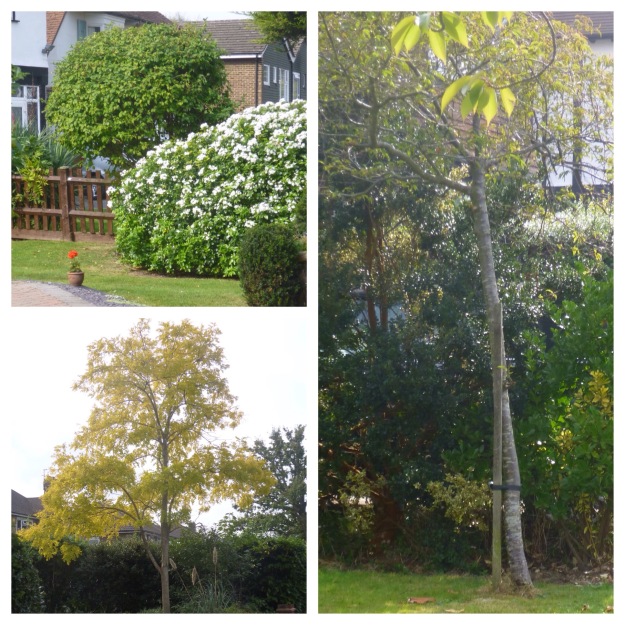 We are passing close to Enid Blyton country here, she lived for a dozen years a couple of hundred metres away at 83 Shortlands Road and wrote ‘The Adventures of the Wishing Chair’ whilst there in the 1930s. In my search for meridian trees I should have perhaps been on the look out for a ‘Magic Faraway Tree’, written much later though. There is though a rather imposing war memorial just off the ‘line’ but on my route.

The run continues next week from Shortlands towards Greenwich, and the territory begins to change.

11 thoughts on “Following the Meridian I – Suburban Footsteps”