The remains of Holy Trinity Church on Glenton Road are easy to miss.  The last remnants are a small bit of Kentish ragstone wall on what is now a Lewisham Council housing scheme – Callaghan Close – named after former Labour Prime Minister and Blackheath resident Jim Callaghan.

The growth of Lee in the 19the century following the breakup of the large estates of Lee Place and Dacre House, along with the arrival of the railway meant that the old parish of St Margaret Lee was subdivided several times with Christ Church on Lee Park, Holy Trinity on Glenton Road, St Mildred’s on the South Circular, and the Church of the Good Shepherd on Handen Road being built in 1854, 1863, 1872 and 1881 respectively.  All but St Mildred’s were to be destroyed during World War 2, the rebuilt Good Shepherd remains, but the other two parishes were subsumed back into St Margaret from whence they came. 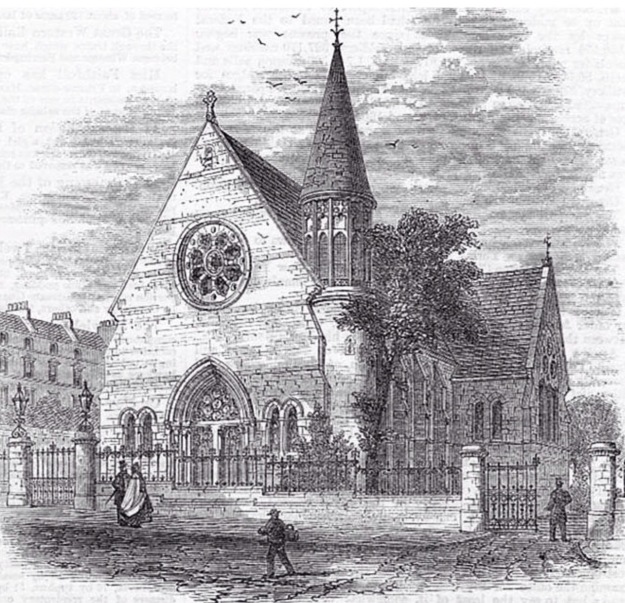 Picture above from Wikipedia Commons – originally from Illustrated London News

The architect of Holy Trinity was William Swinden Barber FRIBA (1832 – 1908) who was described as ‘a Gothic Revival and Arts and Crafts architect, specialising in modest, fairly simple, but finely furnished Anglican churches.’

It was a fairly substantial church, built mainly of the Kentish Ragstone which survives on the boundary wall, seating 600 in the nave and a further 150 in a gallery.  There is a detailed architectural description from a short article in The Builder, where the elevation or church and vicarage below came from. 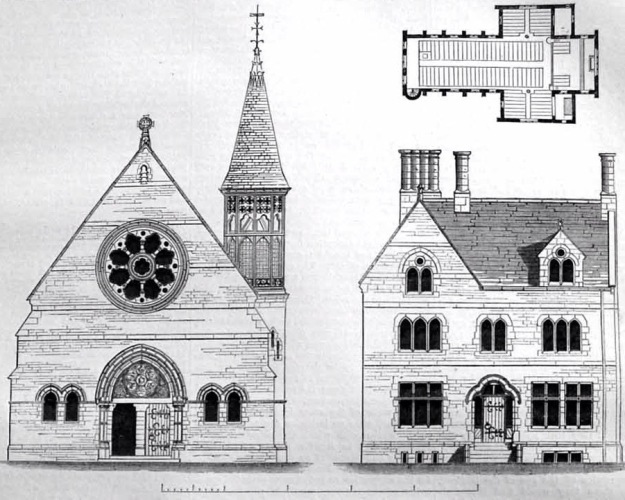 The east and west windows were of stained glass by William Wailes, who was eminent in the field.  While there are no colour pictures of them, his distinctive trademarks were ‘mauve lined with bright red, yellow lined with bright blue, red lined with acid green. Many of Wailes window contain a great deal of pink glass.’

The church was badly damaged by a bomb in 1944, while the parish operated until 1948, the church was demolished in 1960 – it is possible that the parish continued until 1948 at its church hall – now known as Lochaber Hall, more on that in a couple of weeks.  The Southwark Diocesan records suggest that it was sold to Merchant Taylors for £5,300 in 1962, although some of the other detail about the church and its location is incorrect.

Holy Trinity (picture above, Wikipedia Commons) was paid for by wealthy local developer Lewis Glenton at a cost of nearly £10,000, Glenton lived at the Pagoda House in Blackheath.  The links to the Pagoda House are obvious in the detail – the north facing terrace is referred to as Pagoda Villas and also has rather pleasant ‘masks’ over the front doors.  Amongst the other local areas developed by Glenton included Aberdeen Terrace and Kidbrooke Grove.  Holy Trinity wasn’t the only Church funded by Glenton – a few years later he was a substantial benefactor in the building of St James Kidbrooke.

Elsewhere, Glenton was also the builder for the Grand Hotel in Brighton, and, indirectly, he enabled the construction of Charlton’s ‘The Valley’ as he quarried on the site, with a railway taking sand and gravel to the nearby Thames.

The vicarage (see picture below – source) featured in the 1961 film ‘Girl on Approval’ which starred Rachel Roberts and James Maxwell – the film was mainly shot in Lewisham and the wonderful Reel Streets website includes around 30 stills from Lee and Lewisham including ones in Winns Road, Lewisham town centre and an early photograph of the entrance to Manor Park.

13 thoughts on “Holy Trinity – The Lost Church of Glenton Road”