One of the more unexpected sights on Bromley’s streets is a plaque to the Russian anarchist and geographer Peter Kropotkin in Crescent Road, who lived there from 1894 to around 1907 when he moved to Muswell Hill.

London had been a relatively safe haven for European anarchists fleeing persecution for much of the 19th century.  Kropotkin had returned to London after being imprisoned in France for membership of the International Workingmen’s Association (the First International).

The centre of much anarchist activity in London seems to have been around Fitzrovia – something I have touched on in passing before as part of a post on Martial Bourdin, the Greenwich Observatory bomber.  It is perhaps surprising then that Kropotkin made his home elsewhere. Initially he had moved to Harrow – this was where his old friend and comrade Nikolai Tchaikovsky lived.  Both had been part of the what became known the Circle of Tchaikovsky – a society for self-education and revolutionary organisation – during the early 1870s.  Kropotkin had been imprisoned for his involvement in this in 1874 and had escaped from prison before his trial, moving to Switzerland via London.

Tchaikovsky may have been the reason for Kropotkin’s move to Bromley too, as there are suggestions that the former may have lived in College Road, which is just around the corner from Crescent Road.

An interesting article by Sarah Young suggests that Kropotkin and his wife, Sophie, were keen gardeners and that this may partially explain the reasoning behind a more suburban location for his home.  Google earth suggests that the garden isn’t actually that big though, but it certainly didn’t stop the Kropotkins naming the house ‘Viola Cottage’  – the slightly bucolic name may have given the impression of some sort of rural idyll but the reality was a new (then) 4 bedroom semi-detached house in Victorian commuter land.

Bromley was still relatively small when the Kropotkins moved there, its growth linked to railway development – Crescent Road is mid-way between Sundridge Park and Bromley North.  Perhaps they shopped just down the road at Uridges or J Morton Crouch in Widmore Road.

Kropotkin was listed as a self-employed ‘Geographer’ in the 1901 census, but his income appears to have come from articles in ‘Nature’ and the now defunct ‘Nineteenth Century’.  He also wrote articles for the Geographical Journal (1) and presented a paper at the British Association (for the Advancement of Science) (2). 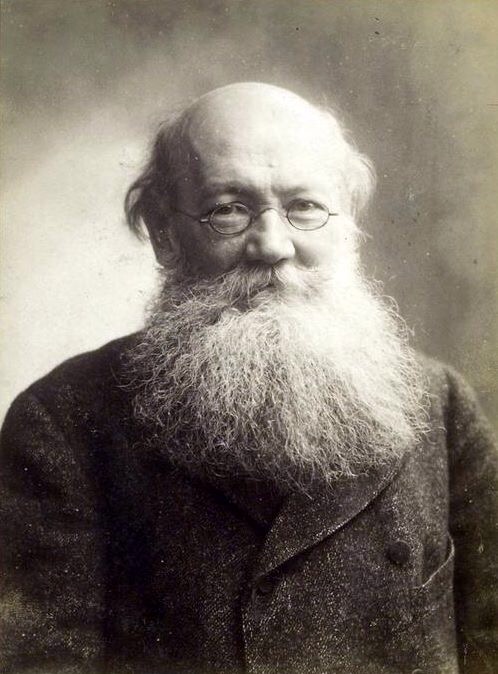 His income was certainly sufficient to be able to afford to employ a young Belgian servant.  However, the income appears to have been spasmodic as there was at least one occasion when he had to borrow money from neighbours.

It would be interesting to know what his neighbours made of him – in the1901 census they included an architect, a builder’s draughtsman and a marble merchant. They may have been impressed with his regular letters to The Times on all sorts of Russian issues – such as on discriminatory laws against Russian Jews (3) and administrative exile to Siberia (4).  Certainly, a neighbour who was referred to as a Prince and appeared in at least one Court Circular (when he was seriously ill with pneumonia in the winter of 1904/05) (5) may have impressed some in commuter land.

However, they may have been less impressed with the press camping outside Crescent Road at the same time as his illness, attempting to get a response from him on the Bloody Sunday massacres.

Eyebrows may have been raised if the neighbours knew the identity of some of the visitors to Viola Cottage, which became an ‘open house for anarchist exiles and British Socialists’.  In late 1899 Emma Goldman visited several times whilst in London in and she and Kropotkin argued about the political significance of gender and anarchist thinking in America at the time.  It seems that Goldman was able to persuade Kropotkin as she has the debate concluding

“Perhaps you are right, after all.” He beamed affectionately upon me, with a humorous twinkle in his eye.

Another regular visitor to Viola Cottage was Harry Kelly, the American anarchist, who seemed to see Kropotkin as a mentor and lived for much of his time in London in nearby Anerley. Another visitor was Fernando Tarrida del Mármol, who is buried at Brockley and Ladywell Cemetery, who seems to have stayed at the Kropotkins for a while.

Paris Communarde Louise Michel was certainly a visitor, and may well have lived in Bromley too – excellent research by the Transpontine blog has pinpointed her to several south London addresses – the nearest confirmed one would be Albion Villas Road in Upper Sydenham.

Other visitors would have  included his friends Rudolph Rocker and Varlam Cherkezov, as well as Keir Hardie, although he wouldn’t see Lenin at home or elsewhere when the latter was in London

Interestingly one of his works whilst at Crescent Road ‘Mutual Aid’ challenged some of the work of one of the Bromley area’s other famous residents – Charles Darwin.  The book drew on Kropotkin’s experiences in geographical expeditions in Siberia to argue that cooperation and mutual aid are the most important factors in the evolution of species and the ability to survive.

A map of eastern Siberia drawn by Kropotkin