It’s five months since my life was re-arranged by a Fiat Punto, while it is getting back towards normal, but is still some distance off, but still infinitely better than it might have been.

Life rather feels dominated by rehab work – near weekly trips to the physio and at least an hour a day of strengthening exercises and stretches, there is no alternative though – if I want to regain full fitness and range of movement I have to do them, and slowly, very slowly I am improving.

Running is still hard work, after three months of a relatively sedentary lifestyle my leg muscles had largely forgotten about the faster forms of pedestrianism and they grumble about every run when I start. But the running is progressing – I am coping with ‘faster’ sessions again – this week’s was a mile at just under 8 minute mile pace. At full fitness that would be around 6 to 6:15 pace, but it is real progress.

The distances I run are increasing – my long run is now over 5 miles and will hopefully get up to around 10k this week. Hills are becoming bearable – I toiled up to the top of Crystal Palace on Friday, but it was easier than Greenwich Park 10 days before. The views from the decaying remains of the burnt out Palace were surprisingly clear, the Sphinx on the way down always seems a mixture of slightly surreal and delightfully familiar, a trip to the Park isn’t the same without seeing one of them, and a little further down the hill, but no less surreal are the rotting remains of the 1970s Concert Bowl, once a stage for the likes of the Beach Boys, Lou Reed and Eric Clapton but now dangerous and unable to be used.

And finally ….. ‘grazing’ in the dappled shade, I spotted another Lewisham Natureman stag escaped from its home borough, outside the former entrance to Thomas Tallis School in Kidbrooke. 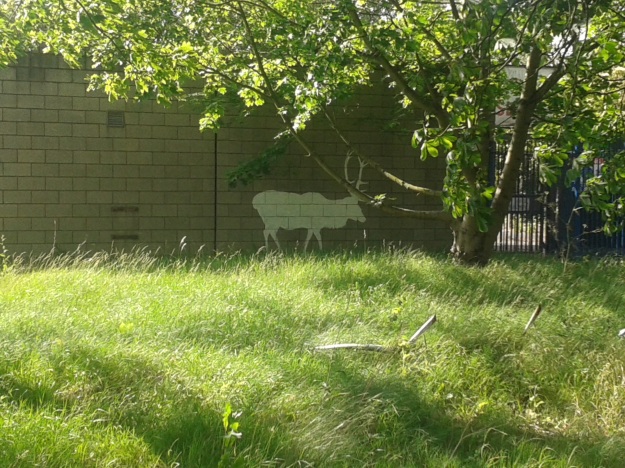 9 thoughts on “Five Months On”