When it comes to the naming of the tributaries of the Quaggy there seems to have been a decided lack of imagination – of those the blog has already visited we have seen Upper, Middle and Lower Kid Brooks, the Hither Green Quaggy and the Little Quaggy.  Those to come, at the time of writing in July 2015, include Border Ditch, Milk Ditch and Grove Park Ditch – none are that inspiring, even the Quaggy itself, probably derives from ‘quagmire.’

However, the small stream Fairy Hall Flow more than makes up for this – its delightful title coming from an earlier appellation of Eltham College, but as that is mid-way down-stream we’ll return to that later.

The exact source isn’t entirely clear although it is possible to track the Flow to Elmstead Wood on the 1907 surveyed 25” OS map, beyond that it is a little unclear.  On the ground though there are what look like intermittent streams in that area of the Wood, one with a small plank bridge – but after the long dry spell prior to my run along the course of the stream they were distinctly water free – I do remember more water in some of these ditches before when running past on Green Chain Walk.

This is old oak woodland, although the name suggests otherwise – Elmstead, ‘the place where elm trees grow’ was first recorded in 1320 and the woods were part of the Bishop of Rochester’s estate and used to provide timber for shipbuilding.

For the most part, the Flow follows Beaconsfield Road northwards, although it diverts from the road in various places – such as at the northern end of Framlingham Crescent where there is a tell-tale dip 40 metres from Beaconsfield Road.  Until the 1930s this was farmland, and the Flow ran free. 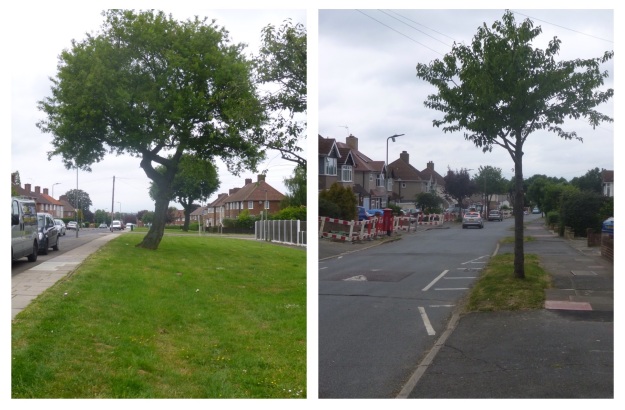 The farmland was part of Court Farm (previously known as Crews Farm) and was one of two farms that were part of the Fairy Hall estate – the other Mottingham Farm, was on Mottingham Lane. The 244 acres of Court Farm were acquired by London County Council (LCC) in the early 1930s and around 2300 homes were planned for a projected 12,000 residents.  The first home was occupied in 1935. With an early, now replaced, school at Castlecombe Road finished in 1937 for the burgeoning population.

The homes will have presumably transferred to the London Borough of Bromley when the successor of the LCC, the Greater London Council (GLC), lost its housing powers in 1980, and those not sold under Right to Buy being subsequently transferred to Broomleigh Housing Association in 1992.

The farm itself was at a bend in the Flow, around the present location of Dorset Road Infants’ School.  Then it’s North along Court Farm Road to the place it takes its name from.

Fairy Hall was an early 18th century country mansion, initially called Fairy Hill (there is a park of this name about half a mile away, skirted by a buried Little Quaggy).  It was home to a variety of the wealthy of Georgian and Victorian England – including the Tory grandee Baron Aspley of Aspley who became 2nd Earl of Bathurst and James Hartley, a shipping magnate.  His widow, Jane, was the final private owner.

In 1889 it was taken over by the Royal Naval School, which had outgrown its original buildings in New Cross, now Goldsmiths College.  The School closed in 1910 but the building was bought by the London Missionary Society’s School for the Sons and Orphans of Missionaries in 1912. This had been based in an imposing building in Independents Road in Blackheath, their previous ‘home’ was in turn taken over by the Church Army, and more recently, by the private Blackheath Hospital.

Presumably as the number of missionaries reduced, the potential clientele needed to be changed and it has since become a fee paying school, Eltham College.

One of the school’s most famous pupils was Eric Liddell, a son of missionaries, he was one of the finest sprinters of his generation, winning the 400 metre gold in the Paris Olympics of 1924 in a World Record time of 47.6 seconds. Liddell had to pull out of the 100 metres as his religious beliefs prevented him running on a Sunday. His style was ungainly but effective – his obituary in the Guardian described him as ‘probably the ugliest runner who ever won an Olympic championship.’ His athletic career was portrayed in the film ‘Chariots of Fire.’

Like his parents, he moved to China as a missionary in 1925, remaining there until his death in a Japanese internment camp – probably from a brain tumour.  The sports centre that is at Eltham College, takes his name.

There is a fine façade to the former Fairy Hall, but it is hidden behind car parks, cricket nets, large shrubs and signage.  The picture below shows the Hall in its prime (source here).  It had a large lakes, fed by the Flow, including a boathouse – see map below which was surveyed during the 1860s.

The lakes at Eltham College were filled in years ago – the course of the Flow thereafter is relatively easy to follow the gentle rise upward of  the contours of Mottingham Lane mean that there was only one escape for the water – along what is now King Johns Walk to join the Little Quaggy.  King John’s Walk (named after the son of Edward II) is an old lane linking the royal residence of Eltham Palace with hunting estates to the south.

It seems likely that another small stream joined the Flow around here. Its source was around  to Chapel Farm and followed  Mottingham Road and behind Leysdown Road to stream junction around King John’s Walk. The stream was buried when the area was developed but still forms the boundary between Greenwich and Bromley.  As it seems nameless, and it runs close to the Porcupine pub – I would suggest Porcupine Brook. The Porcupine itself seems to have an uncertain future, bought by Lidl, although a planning permission was rejected and there were plans to set it up as a community run pub.

As with the rest of the route along the Flow there is no visual sign of the confluences – the streams are underground – the Little Quaggy emerges into meadows alongside the Sidcup bypass a hundred metres or so downstream.  Whether the Flow is actually flowing at the point it joins the Little Quaggy is a different matter, the waters of the Flow may well have been diverted elsewhere – with culverted streams there is sometimes a giveaway sound of water rushing under manholes even on a dry day.  Sadly there was none of this with the Fairy Hall Flow, it is seemingly consigned to the work of cartographers past and the Environment Agency flood planners – its name deserves more than that.