No, this isn’t a post about cycling’s final Classic of the year, the Giro di Lombardia, but the second race of the season’s Kent Cross Country League. The race saw a trip to the grounds of a Grade 1 listed Jacobean mansion on edge of Tonbridge, Somerhill House, now home to a private school. It is a regular venue for the League and is probably the toughest on the circuit.

The course seems to get slightly modified most years and the 2015 edition was no different, the good news was that the really tough hill was skipped on the first lap of three laps, the bad news was that the long slog of a hill at the back of the course had been extended. The net result was probably little different and roughly the same length. The autumn colours were superb throughout and, as is always the case on the course, that beautiful smell of damp, decomposing leaves.

The rain that the BBC had forecast missing Tonbridge didn’t, but by the time we lined up, it was little more than a misty drizzle which cleared as the race progressed. The conditions underfoot were slightly soggier than expected and I was relieved that I had put longer spikes on my shoes than a fortnight ago.

As for my race, it was much harder to judge pace than the race a fortnight ago, as most of the route was either ascending in the mud or losing the height just gained. I certainly misjudged the effort that I put into the hill up towards the House the first time around – I glanced down at my watch at the top and the HRM was ‘screaming’ at me that I was a beat away from my maximum, I took it a tad easier second time around… 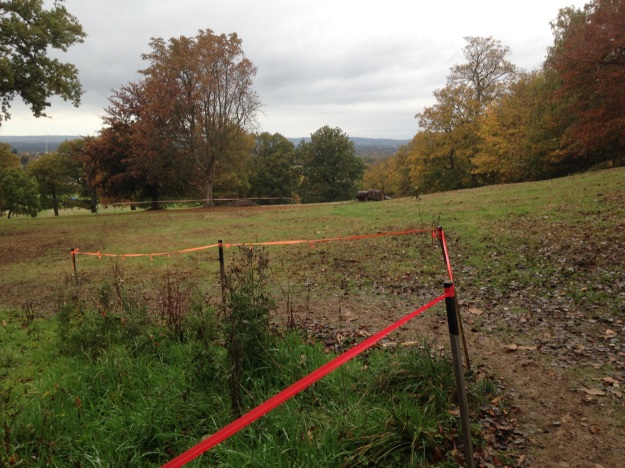 In the end my time was almost identical to last year 51:18 for the 10k(ish) course which I was relatively pleased with – 176th out of around 200 runners – and, on the plus side, I avoided being lapped, always an achievement given the number and quality of younger runners in the League.

1 thought on “The Race of the Falling Leaves”