A daily pleasure of my twitter feed are the paintings of the East London Group of artists that appear regularly in my time line.  In their number are several paintings of south east London including a couple from Greenwich Park, one of the gate house of Morden College and a canvas of the Princess of Wales on Blackheath.  While they were painted over 80 years ago the views are all recognisable, all apart from one that is.

The one that isn’t is a painting from the 1930s – ‘A Church near Blackheath’ by Elwin Hawthorne; for a while I had wondered whether it might be St John’s, close to the Royal Standard, but the spire is somewhat different and the street while similar is clearly not the same – even allowing for the passing of time – Victorian houses don’t change that much. 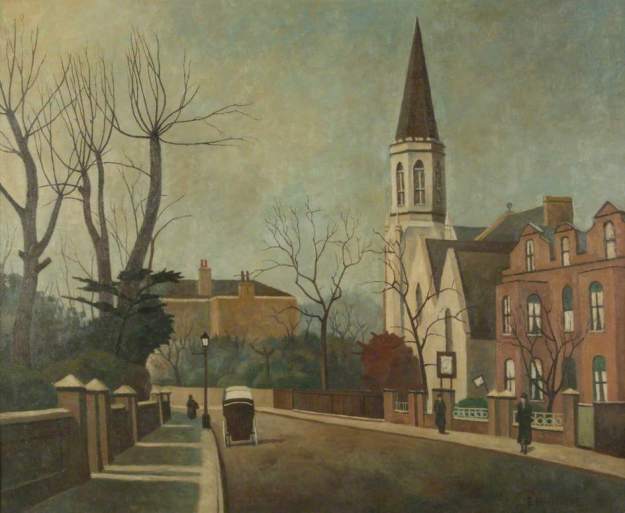 See picture notes below for details re source & copyright

The reason for it not being a recognisable view is that the church has gone, not destroyed in the Blitz or V1 or V2 attacks like Christ Church, Lee Park and Holy Trinity, Glenton Road (both of which have been covered before on the blog) but being demolished in the 1960s due to subsidence – while there have been suggestions that its foundations may have been weakened during World War 2, LCC Bomb Damage Maps show no damage to it or surrounding homes.

The church was St Andrews on the corner of Vanbrugh Park and Mycenae Road, its beginnings were in 1882.  The developing Westcombe Park area of Blackheath had had steady influx of Scots involved in the engineering and shipbuilding industries along the banks of the Thames.  Many of these were Presbyterians and they built a small hall near the corner between Mycenae Road and Vanbrugh Park (1).

As the congregation grew, funds were found for a much larger church – some coming from the explorer John McGregor, better known as Rob Roy.  He laid the ‘memorial stone’ along with Sir Donald Currie in July 1887 – at that stage the costs were expected to be around £6000, with a third of that still needing to be raised (2).

In the end, the church cost £7000 to build and the first minister was Rev John Head Thompson who served until 1910 (3); he was followed by the Reverend Robert Cecil Roberts who remained as minister until World War 2 (4).

By the early 1960s, the church was found to be structurally unsafe and the now much smaller number of Presbyterians in the parish moved back to the original hall (5).  The parish moved again in 1965 to the newly built Church Army chapel. The chapel itself originally had the tallest aluminium spire in the country, but it was subsequently taken down, it is now part of Blackheath High School, although the protective shrubs and trees virtually hide it  from Vanbrugh Park.

The church hall was home for a while to the Vanbrugh Park Literary and Debating Society – the local paper, the Blackheath Gazette, had an extensive report of a meeting in March 1892 on ‘Which of the great parties in the State can best promote the happiness of the people?’  The meeting was chaired by Sir Thomas Crawford, a retired former Director General Army Medical Department and resolution in favour of the Liberal party was carried by 23 votes to 11.

All that remains of St Andrews church is an allusion to it in the name of the housing development that now occupies the site.

As for the artist, Elwin Hawthorne, his paintings have been described as ’melancholy, rather surreal views of London suburbs’ which used subdued colours.

Elwin Hawthorne was born in 1905 in Poplar as Hawthorn, but his name was misspelled in a catalogue and he was advised to retain the incorrect spelling for the future.  His father was a painter and decorator. Elwin had left school without qualifications but had  developed an interest in art whilst unemployed and attended  classes at the Bethnal Green Men’s Institute and then the Bow & Bromley Evening Institute where the teacher was the inspirational John Cooper who was trained at the Slade School of Art.

By the end of the 1920s, he was working as an assistant to Walter Sickert and was exhibiting both with the East London Group and through the dealers Lefevre who bought and exhibited a lot of his work.  He received positive reviews from both the 1929 and 1930 East London group exhibitions – the latter comparing him favourably with the French artist Utrillo

the most original artist of the group, producing pictures of East London which are the English equivalents – though more matter of fact – of what Utrillo is doing for Paris

During the 1930s, he was able to work full time as an artist in his own right and had a number of solo exhibitions – a critic at one in 1934 described Hawthorne as “an outstanding, possibly great artist in the making” and the best solo exhibition in London at the time. ‘The church near Blackheath’ dates from 1934 and was part of this exhibition.

World War 2 ended his career as a full time artist, the art market largely disappeared due to hostilities and when Hawthorne returned civvy street, Lefevre’s couldn’t offer him work or a retainer and suggested he looked for other employment.  When he died in in 1954 he was teaching art part time in schools and doing wages for the electronics firm Plessey. One of the few brief biographies of him suggests that at his death he was ‘disheartened by the lack of opportunities to exhibit, he had lost heart in his work.’

Much of the work of the East London Group of artists seems to have been forgotten after WW2, although in recent years there is much more interest with a book published on the in 2012 by David Buckman – ‘Bow to Biennale.’  While it is out of print, there are plans to publish a second edition.   There have also been some recent exhibitions, there is a website promoting the group’s work and of course the site’s own twitter account.

Returning to Vanbrugh Park, other than the missing church, the view hasn’t changed that much as the photograph from a misty Sunday November morning shows.  Perhaps it was appropriate to visit on that sort of day – there were few people around, as is often the case with Hawthorne’s paintings and the lack of sun gave a similar slightly gloomy feel that the original had.  The modes of transport might have changed, but the houses are still recognisable as is the fir tree – even though it has another 80 years’ worth of growth in it. 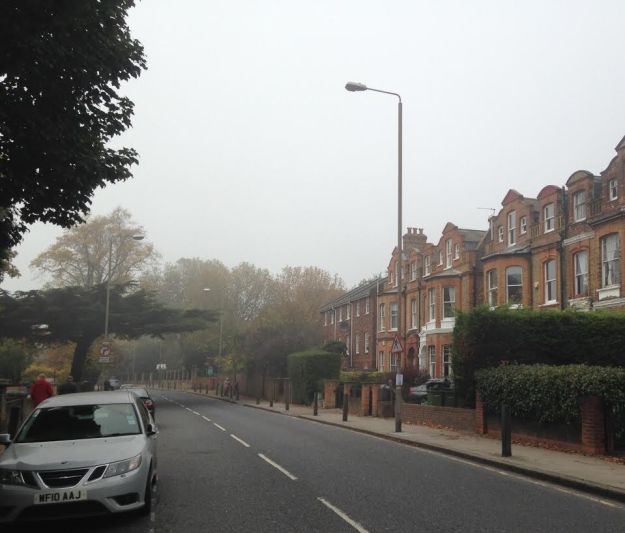 The painting can be viewed at Manchester City Art Galleries; it was made available via the BBC’s Your Paintings Project, which in turn allows reproduction in non-commercial research – this includes blogs (page explaining this only works intermittently).

And finally, a big thank you to Alan Waltham of the East London Group website for help with some details and suggestions.