The first snow of the winter in London greeted the morning, it hadn’t settled on the grass and nothing more than a light dusting remained on windscreens in Lee, but at the start of the annual mob-match with Blackheath and Bromley Harriers in West Wickham there was more than a dusting on the fields and in the churchyard of St John the Baptist next to the start.

It is probably my favourite race of the year, a point to point run, a genuine challenge in attractive countryside – much better than the multiple laps of the traditional cross country course – like last weekend’s race at Brands Hatch.

There were more of us at the start than normal – Beckenham had had a three line whip on attendance, doctors certificates were required from non-attendees, and to encourage our participation the club had decided to pay entry fees – but Blackheath had also invited Striders of Croydon, Petts Wood and Bromley Vets to join the fun.

The course was the same as previous years apart from, pushing the start back a few metres and then going to the right (instead of left) of a group of bushes thirty metres later. The net result was the same length. I’ve described the course in my posts on the race in 2014 and 2015, so I won’t duplicate it here. The snow made for a slightly more circumspect descent of the hill just after Layham’s Farm though; and there was perhaps slightly more mud than last year – particularly in the closing stages across the common.

There were the traditional obstacles on the course – stiles, the waits early on we’re a little longer as there were more of us; horses – there were a lot loose in a field early on and some of the quicker runners had to wait for the harasse of horses (other collective nouns are available) to canter to safety; and on the part of the course that edges New Addington, the lack of horse power of a small burned-out motorcycle.

One of things I love about cross country is the camaraderie, in the second half of the race I ran with a woman from Striders of Croydon, she had run in the Surrey League yesterday – we chatted, we swapped places a few times but she was stronger in the end. She was probably spurred on by the encouragement shouted out by Simon, 50 metres from the line, suggesting that I should be able to pass her. Quite rightly, she was having none of that, and all I could muster was a burst fast enough to protect my place from the runner behind me, whose footfall I could clearly hear.

We hugged at the end, thanking each other for encouraging each other round, comparing notes on broken bones and recovery, obviously my broken neck from almost a year ago top-trumped her broken ankle of seven months ago.

My time was about a minute slower than last year, but around half of that was the waits at stiles as there were a lot more runners. I beat a number of Beckenham runners I expected to finish behind which was pleasing.  All in all, it felt like progress – a 10k before Christmas had seen me over 2 minutes down on 12 months before. 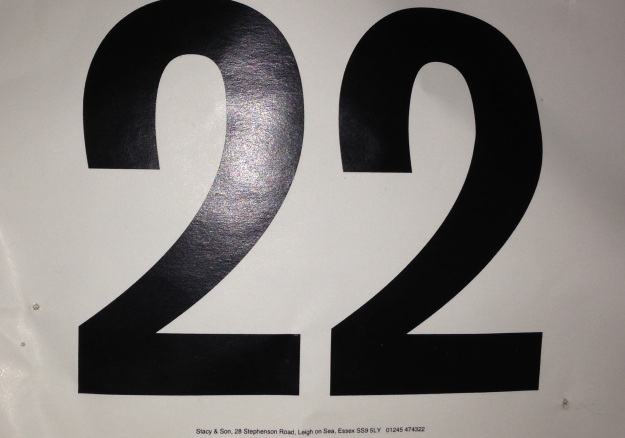 At the time of writing the result of the mob match is still unclear, Blackheath and Bromley seem to have had a few technical problems with the results, so Beckenham will probably have to wait until tomorrow to find out whether we have gained our first victory in the match.

5 thoughts on “Cross Country in Monochrome”