One of the more surprising parts of the Quaggy catchment area is a working farm, Tong Farm, on the borders of Chislehurst and Petts Wood – it is part of an estate that is known as Hawkwood.  Farming was still quite common relatively close to London until the end of World War Two – Running Past has covered several farms in passing as it has followed other stream in the Quaggy catchment – Coldharbour Farm and Chapel Farm while following the Little Quaggy and Court Farm whilst tracking Fairy Hall Flow.

While city farms have been set up, and there are a few bits of green for horse riding remain around Mottingham and the eastern edges of Eltham, there are now very few other fully working farms in south east London –  Tong Farm and the rest of the Hawkwood Estate and the linked Petts Wood are owned by the National Trust.

There are five or six small streams, none much longer than about half a kilometre in length, flowing down the hill from the higher ground of Chislehurst towards Kyd Brook, the Quaggy’s name at this point.  Kyd Brook should not the be confused with the Upper, Mid or Lower Kid Brooks which join the Quaggy further downstream.  Oddly though, the courses of the streams while visible, are harder to ‘follow’ than in a more urban setting – the rights of way across the farmland are limited and the woodland dense in places. 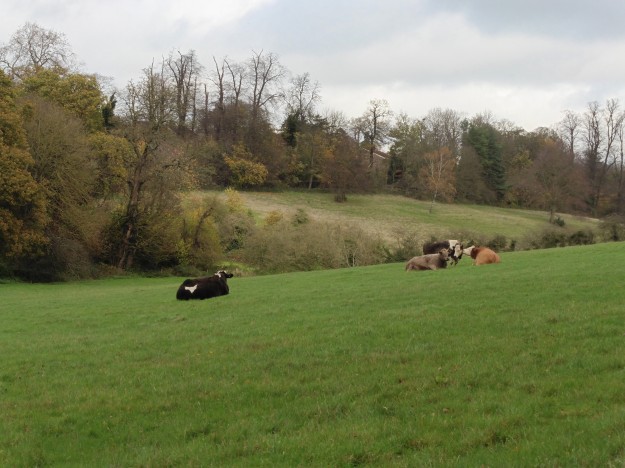 The most obvious valley, above, to the western side of the estate seems to have been culverted; at least as far as OS maps are concerned, for much of its short course.  Its source is near Watts Lane and it then would have tumbled down through open pasture to join Kyd Brook behind Gosshill Road – a fall of around 40 metres over its 550 metre length.  The valley is clear from the photograph (with a relatively long zoom) but as the land is fields without any rights of way across them and there is housing along Gosshill Road it is difficult to check any further.

Just to the east of Tong Farm, there is another small valley with a stream that has been partially dammed to form a small pond, Flushers Pond (behind the wooden fence above), which is surrounded by a dense mixture of ash and alder before the stream descends unseen through fields to Kyd Brook (behind the sheep below) . 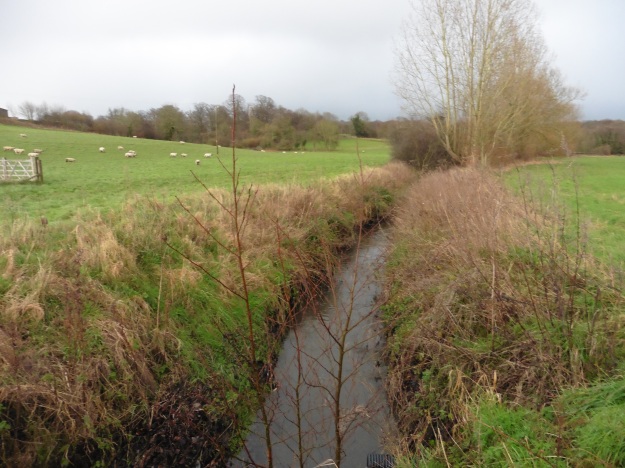 To the east of the farm land is Petts Wood, still controlled by the National Trust and home to several small streams – the wood were so sodden and muddy when visited it made any exploration difficult as was distinguishing between streams drainage ditches and flooded paths in places.  The most easterly of these is referred to as Petts Wood Ditch by Ken White – although he too struggled to locate it (1).

I did return in drier conditions and found both arms of Petts Wood Ditch, both with small bridges and valleys, delightful little streams – it seems almost harsh to refer to them as a ‘Ditch’ – but such is the way with many of the Quaggy’s tributaries. 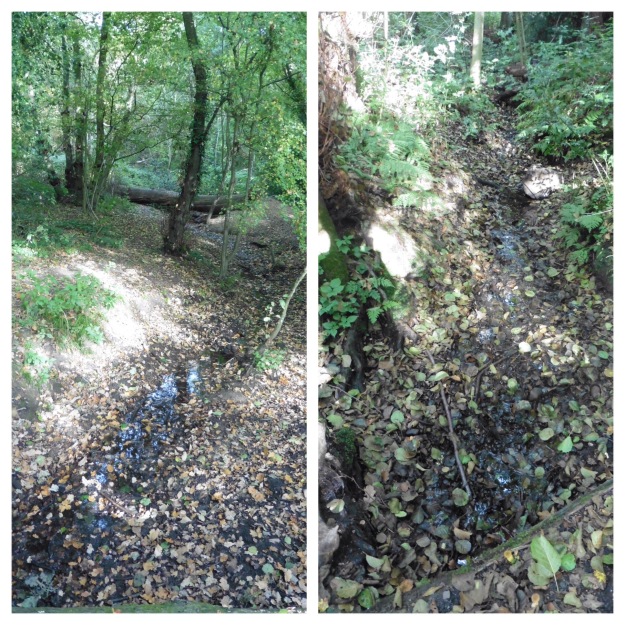 The name Petts Wood comes from the Pett family who were shipbuilders in Deptford, Woolwich and Limehouse and it is believed that the wood was used to supply timber for ships; it was a name that was used as early as 1577.

The 88 acres of the woods themselves, known as the Willett Memorial Wood, were bought by donations from local people in 1925 amidst fears that they would be developed, they were then given to the National Trust.

William Willett was the man behind British Summer Time, the idea having occurred to him whilst riding in the area.  His original plan was more complicated than the biannual clock change that was eventually adopted – he suggested an incremental approach with time gradually changing by 80 minutes in 4 steps.  The idea was eventually enacted during May 1916 with clocks changing for the first time on 21 May 1916.  Willett did not live quite long enough to see the change; he died in 1915 – he is buried in St Nicholas churchyard and is remembered with a sundial in the woods, obviously set to summer time.

The western part of the wood was bought by the then owner of Hawkwood House, Francis Edlmann – the 3rd generation of the family who had lived there – in 1929 – he was keen to preserve the rural characteristics of the area.

The estate was bought by a local couple, Robert and Francesca Hall in the late 1950s after Edelman’s death; like those in the 1920s in Petts Wood, they had concerns the area would be developed and lose its ‘rural’ charm.  After purchase, they then donated the estate to the National Trust.  The Trust would not take on the rambling mansion that was on Hawkwood Lane, parts of which dated from the 17th century but it was in an awful state of repair.  Part of the house collapsed due its condition and the remainider was demolished in the 1960s and a much smaller modern house rebuilt by Mrs Hall.  Some of the outer buildings to the old Hawkwood remain though, including one with a rather attractive weather vane.

The Kyd Brook itself is attractive and bucolic at this point, Running Past will return there, hopefully later in the year,  when I plan to follow the main course of The Quaggy from its source to the confluence with the Ravensbourne in Lewisham (if it is visible at that stage), but there a number of other tributaries that the blog will cover first.

Note
1 Ken White ‘The Quaggy and Its Catchment Area’ p74

9 thoughts on “Hawkwood & the Quaggy Tributaries with No Name”