For a borough which had no purpose built cinema for about 15 year during the period between the ABC in Catford closing in 2001 and the Curzon Goldsmiths opening in early 2016, Lewisham has a rich cinematic history with a plethora of closed and lost cinemas.  They are documented well on the Lewisham’s Lost Cinema site, as well as Ken George’s excellent, but out of print, ‘Two Sixpennies Please.’ (1)

Running Past tends to focus on Lee, Hither Green and Blackheath, but the Brockley Picture Theatre it is a cinema that holds an interest for me in that it is one that I associate with my favourite local author, David Lodge.  Running Past has covered Lodge’s ‘Out of the Shelter’ before, and one day the blog will probably return to his first novel, ‘The Picturegoers,’ which was published in 1960.  Lodge grew up at 81 Millmark Grove, parallel to Shardloes Road and, as the closest cinema to his former home, it is the one I associate him most, although it had closed by the time Lodge was writing the novel.  But it was a painting on the ArtUK website, that really ‘sparked’ my interest. 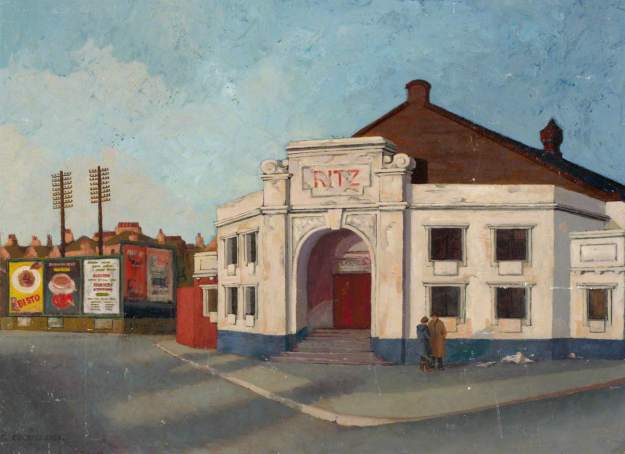 The Brockley Picture Theatre was on a triangular site at the corner of Foxberry Road and Coulgate Street, any signs of it are long gone – it is now (June 2016) an almost finished block of flats, having been a garage in the relatively recent past, but with current land values and a location adjacent to Brockley station development was inevitability. 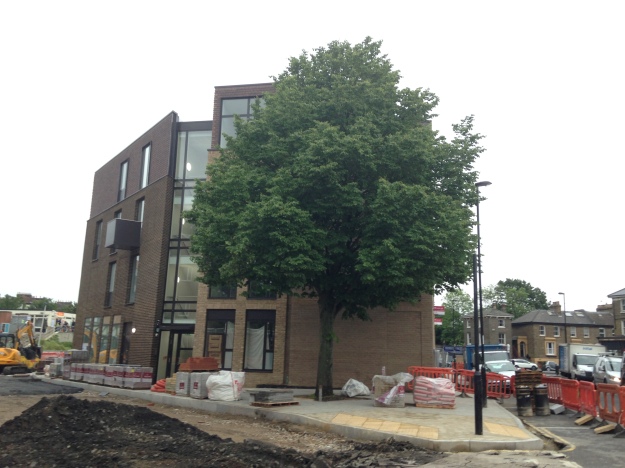 The cinema opened in September 1913 with a capacity of around 700. It had a 40 feet wide proscenium and a 16 feet deep stage.  The initial ticket prices were 3d and 6d (2) and it was noted by Ken George, partially quoting a local newspaper (3)

‘Daintily served teas are provided and everything is done to make visitors comfortable. The result is they go again and again!’ For the patrons’ further delight, the Waldovski string band was engaged ‘at enormous expense’, which was taking a chance, as no music licence had been applied for, or given.

It was re-named numerous times – changing to the Palladium Cinema in 1915; one of the films shown early in its new incarnation was Shielding Shadow starring the Canadian actress Grace Darmond, a ticket for which was recently discovered in via a customer of Browns of Brockley who was doing some renovation work.

It became the Giralda in 1929 when sound equipment for ‘talkies’ was introduced – without a proper licence from the licencing authority, the London County Council who ended up taking the owners to court in 1931 (4). Names continued to change, it was re-badged as the New Palladium in 1936 and finally the Ritz during World War 2. 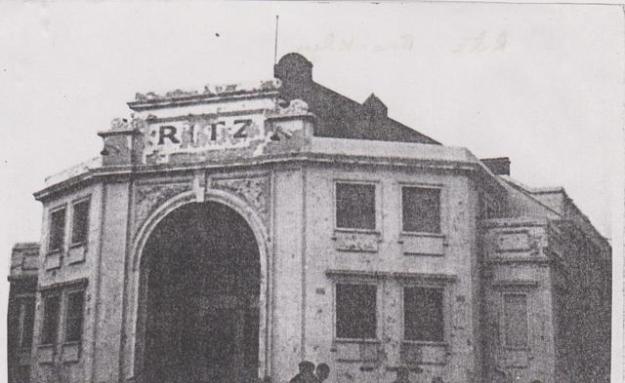 The Ritz Cinema was closed on 14th March 1956 with a double bill of Charles Drake in ‘Tobor the Great’ (below – poster available by Creative Commons) and John Derek in ‘The Fortune Hunter.’ It remained empty for a few years, perhaps whilst its owner, the Brockley Theatre Company, tried to find a buyer.  However, there was a voluntary winding up of the company in early 1959, with the company liquidated later that year.  The building was demolished the following year. 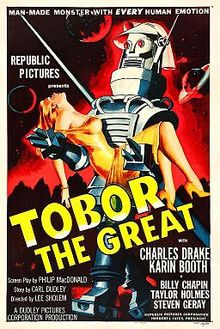 The painting of the cinema at the ‘top’ of the post was completed before its closure, while the listing on the ArtUK website gives it as an unknown artist; there is the name ‘Cockell’ and the date ‘1956’ clearly visible in the bottom left hand corner.  A Google search elicits nothing more about the artist with this limited knowledge though.  The ‘picture painted’ has an attractive charm of fading glory, the letters peeling with a guarded looking ‘meeting’ in front of the cinema, amidst the abandoned newsprint in an age that clearly predates the mass market motor car.  The detail of the presumably air force surplus duffel coat – would have probably helped date, had the ‘1956’ not been marked.

The Lewisham Archives own the copyright to the picture; it is made available through the Art UK site which in turn allows its use for non-commercial research such as this.