Hither Green used to have a healthy smattering of public houses, or at least the northern end did.   Go south of Ennersdale Road, though, and you would always have had to head towards Downham or Rushey Green to find one, this was because the developer of the Corbett Estate, the non-conformist Archibald Cameron Corbett, frowned upon drinking and there were no public houses or off licences on the estate.

Only two pubs remain – the Holly Tree on Dermody Road and the Station Hotel, well, near the station.  In the last decade or two several have called ‘last orders’ – The George on George Lane, the Spotted Cow on Hither Green Lane, the Queen’s Arms on Courthill Road and  the Sir John Morden on Campshill Road have all been lost to developers and turned into flats. 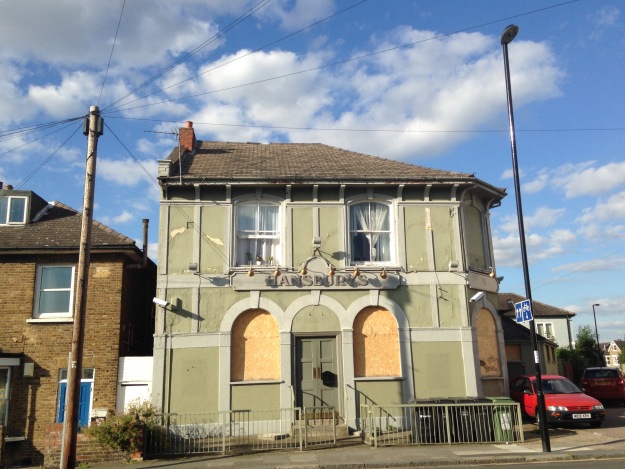 Another that is going the same way is Hansbury’s, known as the Sir David Brewster for most of its life, which has been boarded up for about a year. The pub goes back to around 1868 (1); Courthill Road started to be developed in 1867 (2).  The building which looks as though it ought to be semi-detached,  is very different in style to surrounding properties. 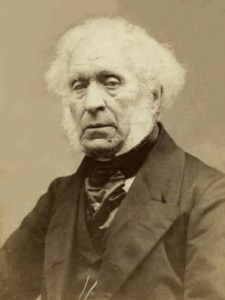 David Brewster (1781 to 1868), his picture via Wikipedia is to the left, was a famous Scottish mathematician, astronomer and scientific instrument maker who was Knighted in 1831.  Perhaps his most famous legacy was the kaleidoscope – 2016 is the bicentenary of its invention.

Brewster would have been relatively well known at the time, although the pub in Courthill Road was the only one that took his name.  One of Ken White’s series of booklets on Lewisham and Lee pubs provides the logic to the appellation – the first licensee was a Peter Brewster who applied for the licence  on 25 August 1868 (3).  There was certainly no direct link, other than the surname, to Sir David Brewster, the latter was born and remained living in the Scottish borders and, while he had four sons, none were called Peter.

The landlord of the Sir David Brewster came from either Suffolk (1871 census) or Essex (every other reference).  Prior to becoming a publican he was a builder, he was living in Stoke Newington in 1861 but had moved around that area, his children were born in Bethnal Green and Shoreditch.  He seems to have kept on his original trade – in the 1881 census he was listed as a builder and beer retailer; perhaps it was building work that had brought him to Lewisham.   His first wife Hannah, who seems to have moved from Essex with him, died sometime after 1871 as by 1881, Brewster had remarried an Irish woman, Catherine – both died in 1888.

Peter Brewster’s death was a tragic one; he was the victim in the ‘Lewisham Poisoning Case’ (5) where a chemist sold undiluted strychnine instead of a dilute version of it. Catherine successfully sued the chemist but didn’t live much longer herself. 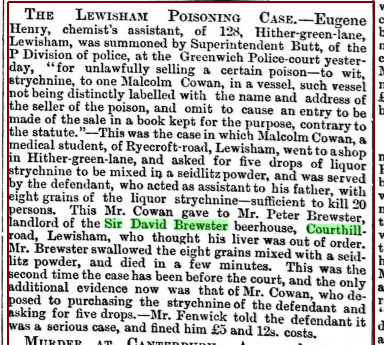 After the deaths of the Brewsters, there was a steady trickle of licensees at the Sir David Brewster, with none lasting more than a year or two (4).  Most didn’t crop up again before or after on the Pub History site, so it was probably their only attempt at pub management.  The Lusbys who arrived around 1901 may have had stints in several East End pubs, although the evidence isn’t conclusive. 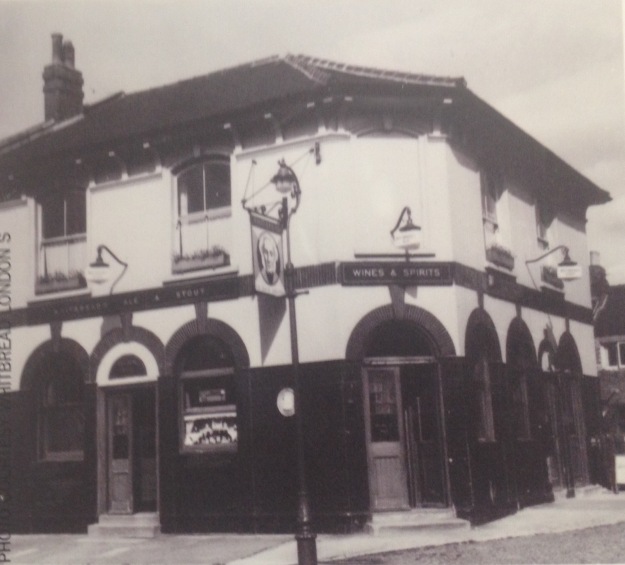 Oddly, there was no reference to the pub in the 1944 Post Office Directory, despite the London County Council Bomb Maps , leaving the pub uncoloured – indicating no bomb damage (6).  However, the pub was still going and licencees in the late 1930s and 1940s were James and Eileen Harris (nee Frost), they had married in Lewisham in 1925 – James was probably from Plumstead, Eileen from neighbouring Woolwich. The Brewster may have been later taken over by their son John (see comment from Ann King). James and Eileen remained in Lewisham for the rest of their lives, James seems to have died in 1971, Eileen lived well into her 90s. They were succeeded in the 1950s by the Frankhams who remained at the pub until around 1974/75 – the photograph above (from information boards at Hither Green station) is probably from that era. 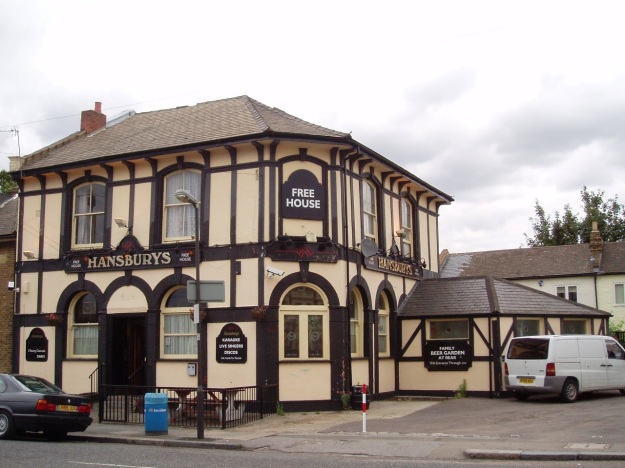 There was a serious fire which seems to have closed the pub for a while in the mid to late 1980s. When it re-opened, there was a new landlord, Mick Hansbury, who renamed the pub, taking the family name – Hansbury’s.  Mick Hansbury  seems to have moved on from the Sir John Morden – linking the name of this pub to that of the landlord clearly had echoes of the past.

Mick and Kathy Hansbury’s stewardship at the pub is fondly remembered by several former regulars and a staff member (see comments below).  The clientele seems to have reflected the area at the time – a real mixture ‘West End theatre workers, teachers, manual labourers and a strong Irish contingent.’   It seems to have been a traditional pub that really looked after its regulars – a Christmas dinner for the elderly and party for the customers in the festive period, with regulars invited to dinner with the Hansbury family if they had nowhere to go on Christmas Day.There were days away to the seaside and the races as well as the more traditional ‘fayre’ of darts and pool leagues, along with regular golfing events. The Hansburys moved on in early 1997, and the ‘tenancy’ was taken over by the Kevin and Anne Albrecht who seem to have continued the approach of their predecessors until around 2003 when it was taken over by a company – Pubs n Bars for a few years.

The penultimate chapter began in 2007 when the lease was bought by new owners  – Dougie and Bridget Millar and their business partner Glen.  They did a major refurbishment of the pub which I remember quite well – I often thought ‘I must stop by when I am not running’, but sadly never did.

Under their stewardship, they continued many of the traditions started under the Hansburys – the outings and the looking after the regulars at Christmas. In the years before its closure it had positive comments on a local message board including ‘my favourite pub locally, the bar staff are very friendly and it has a lovely community atmosphere. The karaoke is great fun as well.’ ‘A very accommodating bar with nice people and a very ambient and relaxed atmosphere.’ ‘The pub is genuinely a good little local to drink in ….one of those pubs that keeps you coming back for more.’

The final ‘chapter’ of the pub’s history is still being written, but appears very likely that it won’t have a happy ending  – the pub got new owners in 2012 – they unsuccessfully attempted to get planning permission to turn the property into flats – they then sold it.  The Millars unsuccessfully attempted to buy it and pulled the last pint in July 2015 and had to move on.  Hansbury’s was sold again in December 2015 for £705,000 at auction and there are plans to extend and convert into 3 flats. 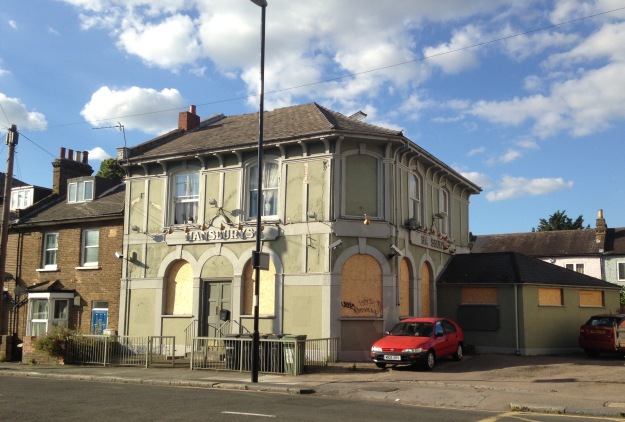 Hansbury’s remains (July 2016), partially empty – the upper floors look as though they are inhabited, but the ground floor is boarded up.  It is a shadow of its former self. But perhaps the final mention should go to those who have lost their local, the pub’s characters:

People like Joe Duffy used to sit at the bar and drink his Guinness for over 30 years… like Les and Bob the builder, Dave, Paul Eade, Morris, Russell, Eugene, Corky, Trevor the plasterer, Andy scaffold, Chris Brian and Craig Green, Jim Boyle, Ian, Neil, Alex and many, many more……. Hansbury’s was what it was because of these people “the community.”

The census are related information is via Find My Past

I would like to thank all those who have added comments here, on Facebook and ‘off-line’, it is really appreciated and has both enabled me to piece together the recent history and add in a lot of more personal elements – for me, at least, it has really added to the post.

I would love to add more though …  So, if you worked there or drank there tell your story – who were the characters that were regulars at Hansbury’s/Sir David Brewster? What about the landlord, the staff, the atmosphere, the memorable nights, the particular celebrations that were held there, memories of the friends, the beers…?  You can use your Facebook or Twitter login to comment here, first comments get moderated before they appear though.  If you found the post via Facebook, you can write your recollections there.  I will update the post with the memories.  Please don’t put anything libelous or that might offend others though…

24 thoughts on “The Kaleidoscope and the Former Hither Green Pub”