One of the more surprising literary links to Lewisham, and Hither Green in particular, is that of Dora Saint, much better known as ‘Miss Read’ who wrote about the fictional, very rural, hamlets of Thrush Green and Fairacre.  She spent some of her formative years in the then more suburban Hither Green – opposite Park Hospital.

While her gentle, observational novels about seemingly cosy, idyllic and probably idealised bucolic landscapes sold well, particularly abroad, she never featured that strongly in the British public consciousness.  In addition to her novels she wrote a series of short autobiographical volumes, the first of which related to a few years in Hither Green.

‘Miss Read’ was born as Dora Shafe in South Norwood in April 1913, her father was an insurance salesman who was conscripted during the First World War. Her mother kept on his ‘round’ of door to door collections to maintain the family income and the family moved to Hither Green around 1916, where Dora grew up surrounded by a close-knit extended family of aunts and grandparents.

The family home’s location isn’t clear, there was no mention of the family in the Kelly’s Directories of the era (maybe sometime I will trawl through electoral registers…), but much of Dora’s early childhood was spent at the home of her grandmother at 267 Hither Green Lane opposite the then Park Hospital.  The house is still there and the first volume of her autobiography paints an interesting picture of life and growing up in Hither Green during World War 1.

It was relatively well-to-do home, dominated by strong women – her maternal grandmother, Sarah Read, and two unmarried aunts – Jess and Rose.  The latter seems to have lived elsewhere but spend most of her non-working time at 267, probably contributing heavily to the household income.  Dora’s own mother and her uncle who also lived at 267 rarely get a mention.  As the older Dora noted the chief attraction of the house, in retrospect, was the affection with which Dora and her sister were surrounded.’ (1)

She describes the house as a solidly built red brick house, it had a vigorous climbing red pyracantha at the front – Aunt Jess would lean out of the front bedroom to cut branches to take to school in the autumn (2);  the red brick is now painted and the pyracantha is long gone though. The house is visible between the trees on postcard above. 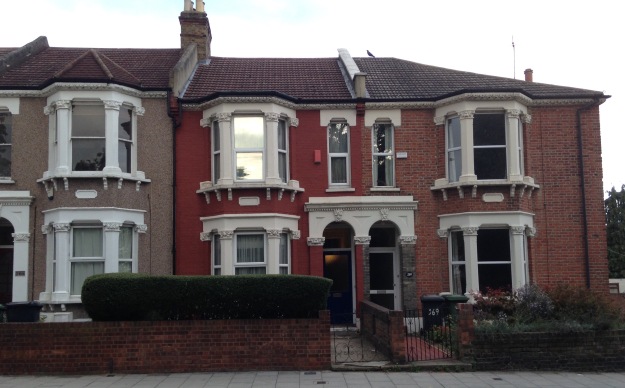 Whilst it well into the 20th century Sarah Read’s ‘house in Hither Green Lane was a Victorian one, and furnished in the Victorian style, sombre and heavy.’ This was contrasted with her paternal grandmother’s home in Walton on the Naze which reflected the relative ‘gaiety’ of the Edwardian era. (3)

The ‘drawing room’ at the front was Dora’s favourite – recalling plush red upholstered furniture and carpets, conch shells on the mantelpiece, when the fire wasn’t lit there was a beaded screen with arum lilies in front of it (4). There was a piano which had china cherubs perched on top, there was a small octagonal table with a potted fern.

The dining room was reached through rarely opened double doors and was dominated by a large mahogany table and chairs, with a corner cabinet containing the best and specimen china (5).  There was a conservatory at the back where fairy lights in small, different coloured glass jars were once lit (6).

Upstairs, there was an inside toilet and a separate bath with brass taps and encased in wood (7) – having an inside WC made it at the more genteel end of London living. Dora remembered being forced to spend time there to ‘try, dear’ before heading off to school.

Beyond the bathroom was Grandma Read’s room where Dora was meant to sleep in bed in afternoons before she was of school age and then during school holidays ‘tucked up under the eiderdown in just my vest, liberty bodice, chemise, knickers… petticoat and socks.’ (8). However,  she often just investigated the room rather than sleep – heading for the lace mat covered dressing table (9). There was a coloured glazed door from the bedroom through which the young Dora would imagine an underwater world through a blue pane, and a world of winter sun through the crimson glass (10).

Her aunt’s room was at the front of the house, looking out towards the hospital which even then had trees big enough to screen it (11) – perhaps remnants of Wilderness House that was on the site before the hospital.

The house was set up for servants with a set of bells operated by handles next to the fireplaces which rang in the kitchen (12).

Out and About in Hither Green

Grandmother Sarah regularly went to the then new Park cinema, the building is still there on the corner of George Lane, where the films were changed a couple of times a week.  Sometimes she went on her own, sometimes with friends, although there is not mention of the young Dora going too (13). 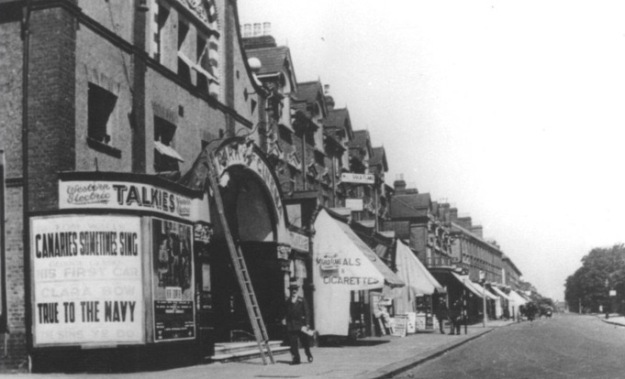 There was a ‘cats meat man’ with a raucous voice whole sold skewers threaded with cooked horse meat (14) although the young Dora misunderstood the concept and was worried that it was the meat of cats that was being sold from the back of the trap (picture source).

Sarah, Jess, Rose as well as Dora and her sister, all seemed to go to St Swithun’s Church a little further up Hither Green Lane (15); Rose ran the Sunday school there – ‘simple hymns and prayers alternated with handwork, making Moses in Plasticine, for instance, to put into a carefully woven cradle…There was quite a bit of marching…’ (16). 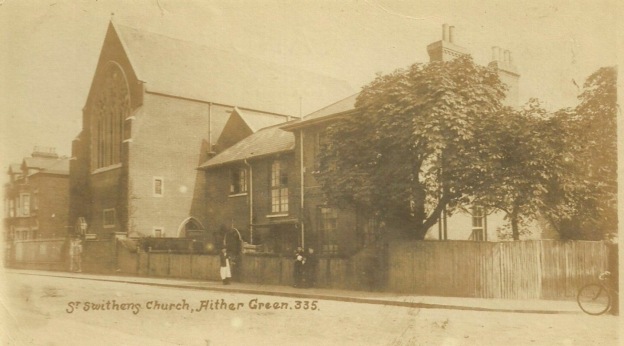 Congregation members often came back to 267 to sing around the piano in the ‘drawing room’.  Dora and more particularly her sister found this quite boring and hid behind the piano amongst the sheet music (17).

It wasn’t just church music though that was sung, Sarah clearly had been to music hall as there was lots of singing of music hall numbers as well as some of the more contemporary wartime songs (18).

There was little recollection of the war itself other than the difficulties of getting certain foods, although as the youngest, it seems that Sarah spoiled Dora by putting her with sugar in sandwiches for her (19).

Soldiers and sailors regularly turned up at 267 for post church singing during the war (20), but apart from that the only mention was noticing a crater from a bomb one morning after a raid (21).  This was almost certainly in May 1918 when the area was attacked by aircraft, 2 bombs were dropped, one near St Swithun’s Church, where about 20 houses were damaged; the other bomb on Hither Green Lane, damaged 12 houses. No people were injured or killed, and, presumably, the second was some distance from 267, otherwise Dora would have probably recalled it.

The sisters were frightened that the Kaiser was hiding behind curtains on the landing ready to pounce! (22)

Their aunt, Rose, was a teacher at Ennersdale Road (now Trinity) School (23) and took both Dora and her elder sister to school with her. Dora’s first visit was the day before her fourth birthday in 1917 (24) her sister was already there.

The route to school involved walking down Ennersdale Road, the rumbling of the trains overhead terrified the young Dora (25). 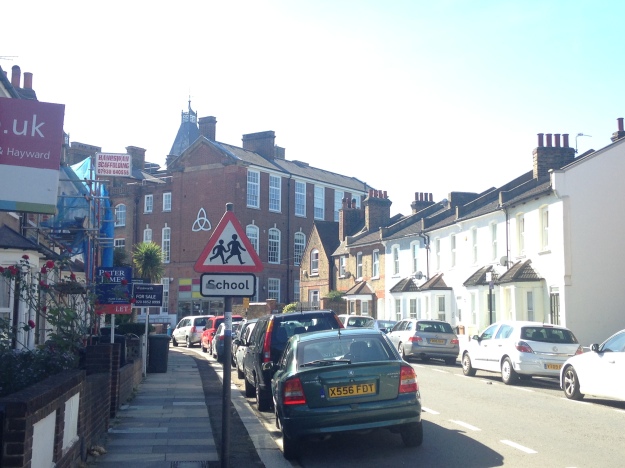 Dora played a lot in the kitchen, often with her Aunt Jess, whilst she iron or made clothes.  She modelled with plasticine – mimicking the grocer cutting and wrapping up butter from the marble slab at the Home and Colonial Stores (26), which were at 180 Hither Green Lane, between Lanier and Theodore Roads (the picture is illustrative rather than Hither Green Lane – Creative Commons source here)

Other shopping games were played in the kitchen too, whilst most of the ‘purchases’ were imaginary, a request for ‘a farthing’s worth of currants’ would often lead to the real thing being brought down from a large metal canister on a high shelf (27).

The early books that the young Dora had read to her at 267 included many of the Beatrix Potter, which had begun to be published at the turn of the century (28).

Dora and her family moved out to the more rural Chelsfield soon after the war ended – both she and her mother were seriously ill as a result of the Spanish Flu epidemic of 1918 to 1921 – and they moved for the country ‘air’ whilst her father continued to work as an insurance salesman.

3 thoughts on “A World War One Childhood in Hither Green”