A while back, Running Past covered the short lived Perry Hill Stadium, also known as Dog Field – which saw the racing of both greyhounds and midget cars in the 1930s.  While researching that post, it became clear that one of the former users of what became known as Dog Field was London Irish Rugby Club – they were there when the cartographers ‘called’ in 1913 – although the Ordnance Survey didn’t seem to publish the map for another 20 years, by which time the Irish’s nomadic existence had seen them move an several times and they had obtained their first permanent home in Sunbury-on-Thames.

Source National Library of Scotland on a Creative Commons

It seemed strange to see a reference in Catford to a rugby club that had been in the Premiership for a dozen years until their relegation in May 2016 (although at the time of writing they are topping the Championship).  The roots of the Irish go back to 1898 and their first match was against the long since defunct Hammersmith but they had moved from ground to ground and from one part of the capital to another.  Their first home was in Herne Hill, where they moved in 1900, but it was then on to Stamford Bridge (then known as the London Athletic Ground), followed by a brief sojourn at Wandsworth Common and a couple of seasons in Walthamstow before they ended up at Perry Hill, Catford (1).

The ground was known as Laurel Brook (2) which was the name of a large house adjacent to the ground (see map above).  The first game after the move from Walthamstow was a heavy home defeat to United Services in front of a ‘large crowd’ in early October 1907 (3)

There were brief mentions of further defeats by Guy’s Hospital (4) and Old Merchant Taylor’s (5) before Rosslyn Park were beaten in mid-December (6).  In the New Year, a grim sounding dismal 0-0 draw was played out with near neighbours Catford Bridge (7).  The crowds declined quickly though, as the initial excitement of rugby in Catford waned, a cursory report in The Scotsman for the third game noted (8)

There is a very grainy picture of the team from the Penny Illustrated that season (9).

The mentions in The Times of the matches at Laurel Brook remained little more than scores in the 1908/09 season – they were, in the main, defeats, with the Irish getting heavily beaten by visiting teams.  The Bedford Mercury did a more in depth report of a ‘poor’ match in late February 1909, where the home side again lost.  Crowds were still sparse and the reporter noted ‘they want and deserve more encouragement, and now that they have a nicely appointed ground on a lease for a few years it is hoped that they will get it.’ (10). They may well have done better away from Laurel Brook that season, as, from the 28 matches there were 15 wins and 13 defeats (11)

The 1909/10 season began with a rout as the United Services were again the visitors – the Irish were no match and failed to trouble the scorers whilst the opposite scored seven goals, one dropped goal and three tries (12) – it was a score that would not have been out of place on the neighbouring cricket fields.  It was only marginally better when Old Merchant Taylors visited a few weeks later, and again the Irish failed to score (13).  All the home matches that campaign seemed to ended in disappointment for the faithful at Perry Hill.

Whether there were changes in the summer, it wasn’t clear, but there was at least an improvement in the opening fixture of the new campaign but there wasn’t excitement for the paying public as neither Barts nor The Irish forced the scorer to get out of their chair (14).

The Times bravely sent one of their reporters to a match at Perry Hill early in the 1911/12 season against London Hospital – s/he clearly wasn’t impressed by the fayre on offer from the men (presumably) in green who again lost heavily – the Irish forwards ‘deteriorated hopelessly .. a series of promiscuous kicks….’ (15) 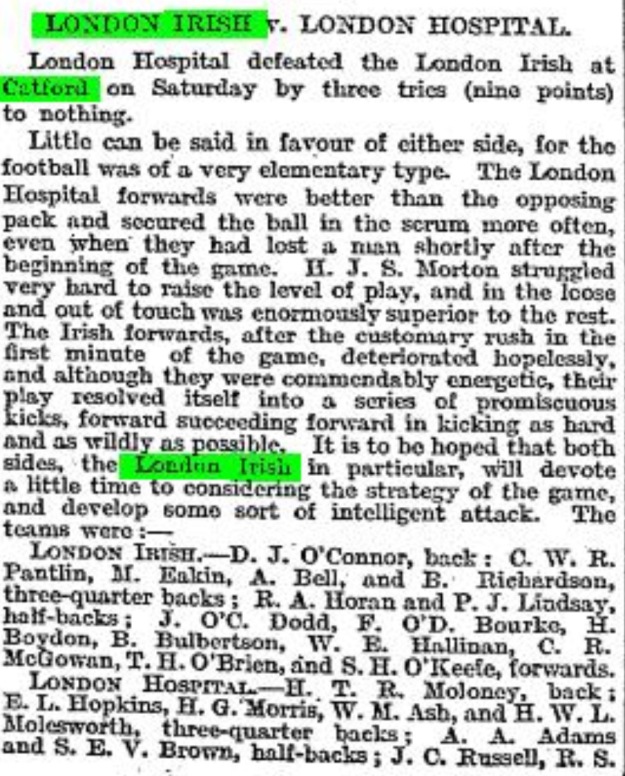 January 1913 saw a rare home win against Streatham (18), however, it was probably to be London Irish’s last match at Perry Hill – future home matches that season, in what was to prove to be a more successful campaign, were in Wandsworth, probably ground sharing with London Welsh until war broke out in 1914 and the club was mothballed until hostilities ceased (19).

Presumably the lease ‘for a few years’ had come to an end and they either decided to try their luck elsewhere or they were forced to move.  The former seems more likely as there seemed to be no development pressures on the ground until the 1930s and poor crowds noted in the early years are probably unlikely to have picked up with the poor performances on the pitch. 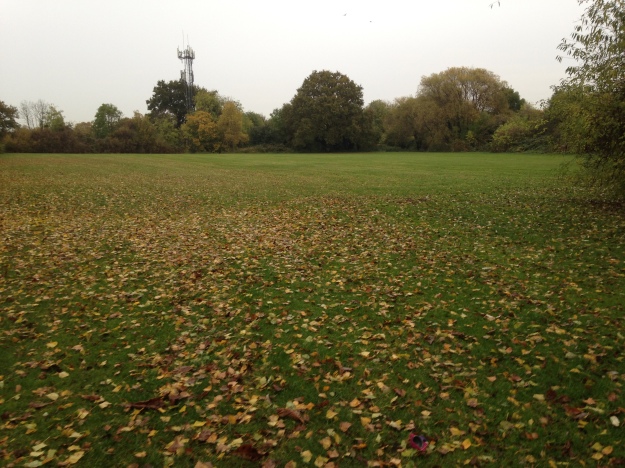 Today, part of the ground is still there – it is a pleasant piece of open grassland, generally quiet when I pass on early morning runs past, apart from a few dog walkers – appropriate given the later name that is still used by a few ‘Dog Field.’  The western side succumbed to development – the eastern end if Datchet Road – in the 1930s presumably after the greyhounds and midget cars had left.