Running Past has already covered a couple of Lee and Hither Green cinemas – the Globe in Staplehurst Road and the Lee Picture Palace which was on the corner of Bankwell and Lee High Roads.  Both were short lived – part of the reason for this was almost certainly the more successful Imperial Picture Theatre (sometimes referred to as Palace) which was at 404 to 408 High Road, close to Lee Green. (Map surveyed in 1915 – on a Creative Commons via National Library of Scotland).

It opened on 6 December 1913 (1), a week after The Globe (2) but a good three years after its nearest neighbour 400 metres down Lee High Road. The picture below is from its latter years and is on a Creative Commons, courtesy of Ken Roe.

It was designed by H. Wakefield & Sons, and the Cinema Treasures website describes it as having had a ‘stone and brick facade, with columns and an elaborate pediment.’  As the map shows, it was quite a deep building which seated 750.  It tried to encourage the wealthy of Edwardian Lee to come by separating them from the masses – offering boxes at 5/- and 7/6d – with those with less disposable income being able to get in for thruppence (3).

The opening afternoon was an invitation only event which saw a series of ‘shorts’ including the French film ‘The Duke’s Talisman’ (4) – described as ‘full of action and intensely exciting situations’ (picture via eBay November 2016).

The cinema seems to have changed hands early in its life and by its second winter it was offering special shows for children – with a Christmas morning show for 400 and a gift for each child supplied by Chiesmans department store (5). 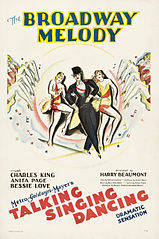 The cinema had a small orchestra to accompany the silent films, with frequent adverts in the press for musicians – ‘relief’ pianists seemed particularly hard to come by (6).  By the end of the war it had seen off its local competitor, Lee Picture Palace, which had been requisitioned as a munitions factory and never re-opened.  It changed with the times too, both in terms of name – it was to become the Savoy under new management in 1928 (it had been known just as the Imperial since 1916 (7)) – but also in terms of the pictures it showed – sound equipment for ‘talkies’ was installed in 1929.  The first  talking picture was ‘The Broadway Melody’ (8) (Picture on a Creative Commons), the first sound film to win an Academy Award for Best Picture.  Whether the owners showed the version with one of the first Technicolor sequences is not clear though.

The cinema survived World War Two unscathed and was sold again in the early 1950s (9) with the new owners changing it to its final name – The Pullman.   It only lasted another four years with the final closure on 27 June 1959 with a performance of “Tarzan and the Lost Safari”.

The building survived in a number other guises for another 27 years, initially as a motor spare-parts shop and then a shopfitters  – there is a photograph of it from this era, sadly without any usage rights.  It was demolished  before in October 1986 to make way for the Lee Green Sainsbury’s.