The shops on Staplehurst Road have served the Hither Green community to the east of the railway line for well over a hundred years, and, no doubt, some now even venture under the tracks from the west too (it was harder with the pre-1970s layout of the station).  Their dates are there to see, if you look up, in a couple of places. 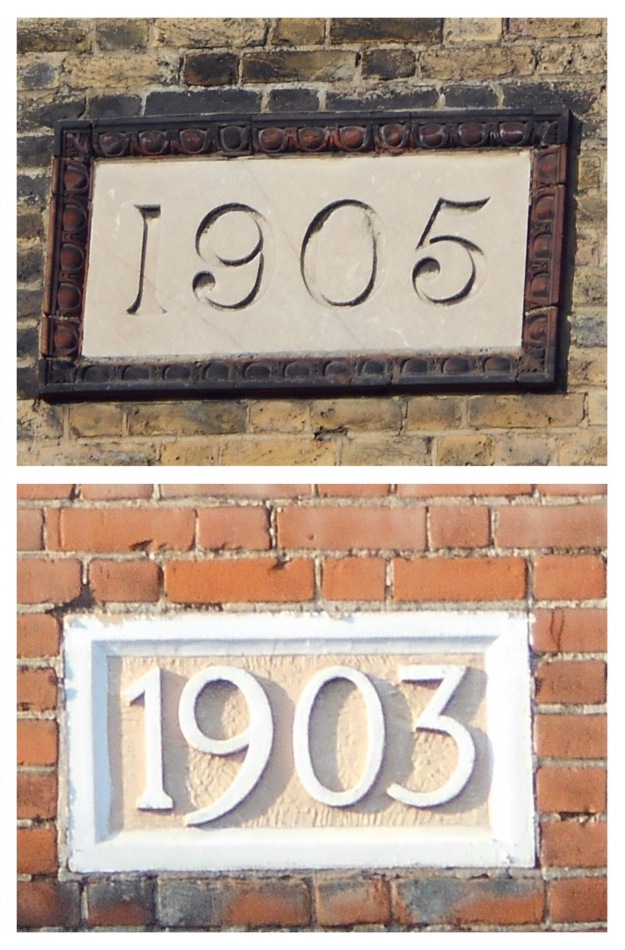 In the early years, while some of the names on the shops changed, the businesses remained similar with some moving around in the street.  They were small shops specialising in one sort of produce – butchers, greengrocers, bootmakers, grocers, tobacconists and the like.

By the 1939 Register, while few of the original traders remained, little had changed in terms of the types of shop.  There are some gaps as the Register only captured those who were living above the shops and several – particularly 11-17 – aren’t recorded.  The changes become more apparent when we fast forward to 2017, most of the specialist food shops have gone – replaced by more generalist off licences and convenience shops along with, the more recent developments such as IT, mini cabs and betting (which was only allowed on the high street after a change in the law in 1961). 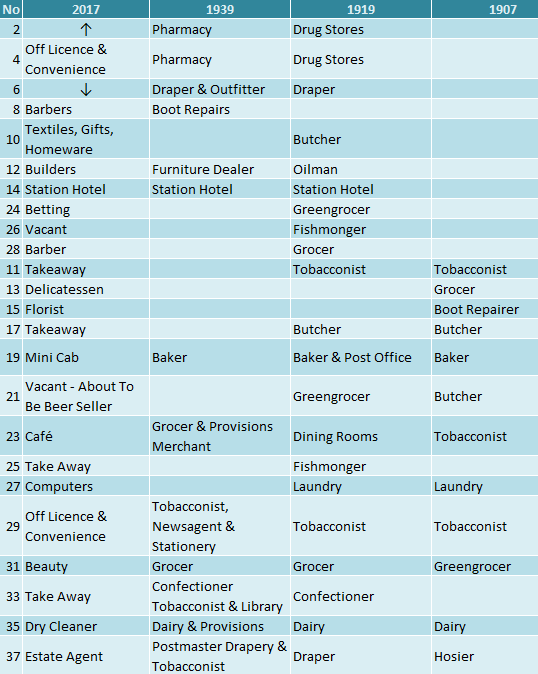 Some of the stories of the early shopkeepers are worth telling  – Henry Edwards (sometimes spelled Edwardes) ran a pharmacy at number two (now Nisa) for much of the street’s early existence.  He was born in Egypt to British parents  and seems to have stayed in the then Middle Eastern colonies.  He moved to Catford in the latter half of the 1890s and was a mineral water manufacturer in the 1901 census.  He was almost certainly the first tenant of 1 Market Place, and stayed there until at least 1919 expanding into number 4 when a watch repairer moved out around 1918. The family had moved on by 1921 though – Henry was living in Fulham when he died that year.  Number 4 briefly had a resident who was later to become well known – Edith Summerskill, a left wing Labour MP for Fulham West, briefly lived there for a year or so from 1914 with her father who used the shop front as a surgery. 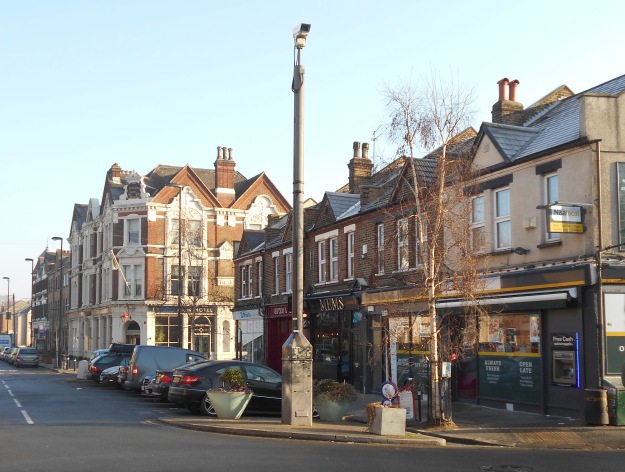 Lucy Goericke’s grocers shop was another relatively long standing business on the street – she started around 1911 at number 6 (now part of Nisa) moving on to 28 (now Bill’s Barbers) by 1914.  She came from Canvey Island and had married Karl Otto in early 1899 in Hackney with their daughter, Ethel being born later in the year.

She had certainly moved before the Second World War as she was listed on electoral registers in Bexley from 1938.  However, as the 1939 register only covered who was living at properties and there was no record for 28 Staplehurst Road she may have been still running the grocer’s shop there.  She died in April 1958, by which time she had moved to Ealing, and was described as a widow. Her daughter had died seven years before in Lambeth.

What happened to Karl is unclear, there is no mention of him in Britain after the 1911 census.  In the early part of the First World War, many German men were deported and German businesses attacked – Running Past has covered this in relation to Deptford, but there were also disturbances at Lee Green and Catford.  Oddly a Karl Ludwig Otto Goericke of the right age and Lucy Goericke were listed as missing persons in Australia in 1915.

Laban Nash was a relatively old man when he came to Hither Green around 1907 – born in 1843 in Norfolk he had worked as a labourer (1881) and then a Covent Garden porter (1891 and 1901) – he and his wife Elizabeth would have been well into their 60s when taking on the tenancy of 7 King’s Parade (now Body Silk Clinic) when the shops opened, moving on to 2 Grand Parade (now Coral’s) in 1911.  Laban lived until 1923, it is not clear whether Elizabeth outlived him or not.

Their next door neighbours, the Strouds, were poulterers and fishmongers – they hailed from Kent, the father, Albert, probably started the business – Stroud and Sons – but by the time the census enumerators called in 1911, Frederick Arthur Stroud, aged 24 was running the business.  While Frederick seems to have lived until 1964, it is not clear how long the fishmongers business lasted.  There were people living ‘above the shop’ in 1939, but they were unrelated to the business.  The shop is currently vacant.

William Gardiner was one of the early traders, setting up a butcher’s shop around 1907 – he was from Whitchurch in Hertfordshire, he married Ethel from Gravesend in 1908 – initially at 2 Kings Parade (vacant but may become Park Fever beer and chocolate retailer through crowd funding ) before moving to take over a shop vacated by another butcher at 10.

There were two long lived family businesses next door to each other.  George Jones, a grocer had moved into 31 (now Body Silk) around 1914   – in 1901 he had been managing a similar business in Hastings, although originated from Northop in Flintshire.  In 1939 there were three children living above the shop – Doris, an unemployed piano teacher, Hilda who was probably caring for her disabled mother (Kate) with Claude (24) who was assisting his father (67) in the shop.  The relatively common name meant that finding out anything further about the family proved difficult.

Next door to them at 29 (now Quick Shopping) for many years were the Darvills (not to be confused with the unrelated Darvell & Son at 19 – now home of DJ’s Cars – see above, source eBay Summer 2016).  The Darvills were a newsagents, tobacconist and stationers across several generations from 1908 until at least 1939, initially at 23 (Station Café) before moving to 29.  John was from Spitalfields and his wife Emily who was from Westminster.  In 1911 they were at Kings Parade with their three children, Kathleen, Gertrude and John along with Emily’s widowed sister, Agnes.  John Senior died in 1922, but the rest were still there in 1939, although Emily was to die before the war was out with Agnes passing away in the early 1950s.

John Jnr married Doris Freshwater, a ‘tailoress’ (1939 Register) who lived in Ennersdale Road and perhaps popped into the shop on way to station in (late) 1939, like the rest of his family, he  stayed in SE London or north west Kent (Kathleen) until their deaths.

Kathleen and Gertrud never married and it is possible that they kept the shop going beyond the end of the war.  One day I will try to do some more work on this at the Lewisham archives, but if anyone knows ….. 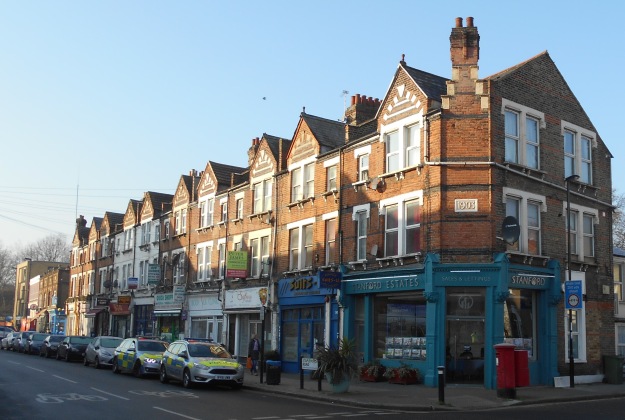 And finally …… as for the Disney store, Staplehurst Road cannot claim to have had an official outlet selling merchandise relating to Buzz Lightyear, Cinderella or Frozen – the Disney store was at number 37 (now Stanford’s Estate Agents) and predated Mickey Mouse by a decade – it was a drapers run by a Miss E H Disney.  She arrived on the street in 1917 and was still there in 1919 – but was gone by 1939, sadly nothing definitive is known about her.  The shop had been a drapers or hosiers since the first Kelly’s Directory reference. By 1939, while Mickey Mouse may have been well known to the cinema going public, the Disney shop was no more – the Post Office had moved from 19 to 37, a location it was to keep until at least the Millennium.

11 thoughts on “The Butcher, the Baker and the Disney Store – Shopping on Staplehurst Road”