In Fernbrook Road, opposite the railway embankment for platform 6 at Hither Green station, there is a row of bungalows which were built by Lewisham Borough Council sometime after the Second World War.  They look slightly out of place in an area of Victorian terraces, like lots of other small sites in south east London – they were not there because of any defect of the original properties but because of bomb or rocket damage. Fernbrook Road was hit by a V-1 rocket, better known as a Doodlebug, on 23 June 1944 – which destroyed several houses and caused serious damage to others.

V-1 attacks had started on 13 June 1944 – a week after the D Day landings – and were to go on until October 1944 when the last V-1 site in range of Britain was captured, although there were a small number of later air launched attacks.

As was noted in a post a couple of years ago on the attack on Lewisham town centre, there appear to have been some attempts to use double agents to persuade the Germans that the V-1s were over-shooting their targets and landing to the north west of London, this may explain the reasons for the volume of V-1 rockets that hit South London. The old boroughs of Croydon (171), Wandsworth (122), Lewisham (115) and Woolwich (77) were the 4 locations hit the most. The Cities of London and Westminster only received 17 and 29 attacks respectively.

The V-1 exploded on impact and a blast wave rippled out from the impact point, effectively creating a vacuum in the centre – the combined impact was to both push and pull buildings leading to large numbers of collapses.  The Impact was often spread over quite a wide area with total destruction in the centre with much less damage on the outside.

The map above (1) shows the damage surveyed by the London County Council, the circle to the north east of the railway shows the location of the Fernbrook Road V-1 (the adjacent one, in Nightingale Grove will be covered in a later post).  The terrace of homes it hit was probably built by W J Scudamore and Sons – certainly the houses either side of those destroyed have the same square bays and details to others locally.

The extent of the devastation is clear – destroying or damaging beyond repair the immediate area but causing significant damage to the shops on Staplehurst Road and the houses behind, on Leahurst Road, along with some blast damage to the Station Hotel.  Not showing on the map, there was also some damage to the Dartford Loop line (2).

There were 22 injuries (3) and two deaths in the attack on Fernbrook Road – Marjorie Annie Lewis and her father, George Samuel Atkins at 22 Fernbrook Road.  Marjorie was 29 and listed as a Clerk in the 1939 Register, George was a Butchers Office Manager in 1939.  George would have been survived by his wife Lily – a Lily Atkins of the right age remained in Lewisham until her death in 1959.

Marjorie had married Francis Lewis who was a Railway Porter after war broke out.  Francis was living further down Fernbrook Road at 64a in 1939 with his parents and sister.   It isn’t clear whether Francis had moved into 22 after their marriage or Marjorie was just visiting her parents at the time of the attack.

They weren’t the only World War Two civilian deaths in Fernbrook Road – Joyce Jones of 100 was to die a month later at Lewisham Hospital probably a victim of a later V-1 which hit there on 26 July 1944 and Henry Munyard from 106 who died in an attack on the London Power Station, along with eight of his work mates on 11 July 1944.

The Blitz, the ‘Dooblebugs’ and the later V2 rocket attacks had destroyed thousands of homes in south east London, leaving considerable numbers homeless. One of the responses was the Housing (Temporary Accommodation) Act 1944, which planned to deliver 300,000 prefabricated homes over 10 years, within a budget of £150 million. The temporary homes were designed to be quickly put up and last 10 years while more permanent solutions were found. Only half of that number was ever delivered due to a combination of costs being greater than expected and higher than traditional brick homes, and public expenditure cuts after 1947. 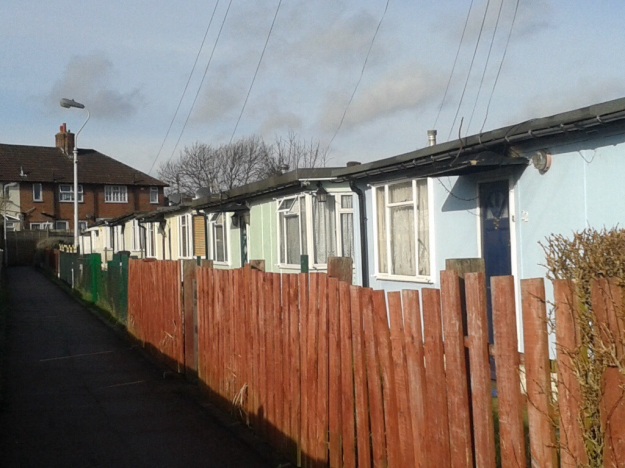 The old Borough of Lewisham put up 1,610 prefabs by 1948 and a further 1,088 by 1955. Many went up on parks and open spaces  – the most obvious location for this was on the edge of Forster Memorial Park, the Excalibur Estate (see picture above – taken in 2014), which Running Past covered in one its earliest posts; but there were there were several dozen around the edge of Hillyfields, where they remained until the 1960s, along with several locations on Blackheath (source Britain from Above on a Creative Commons). 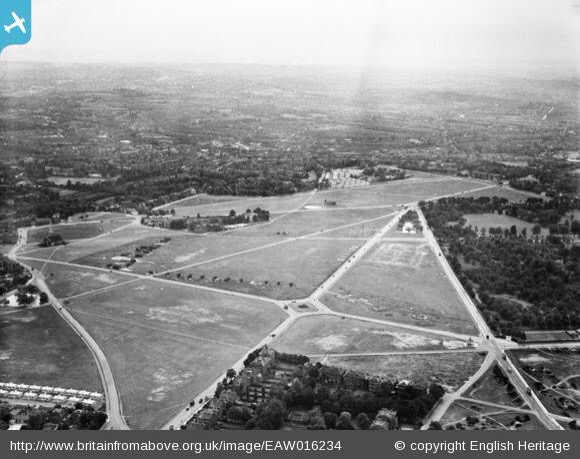 Many bombsites were cleared too, including on Boone Street in Lee.  Fernbrook Road was another of these sites – the 1949 OS map (on a Creative Commons from the National Library of Scotland) shows them marked.

One of the families who lived in the five prefabs in Fernbrook Road was the Beech family, they had lived there before the V-1 rocket attack.   The attack was recalled by Margaret (see comments below) who had been evacuated to Wales the week before the attack.  Her mother and older sister were in a Morrison shelter when the rocket hit three doors away and miraculously they survived.  They moved to relatives in Mottingham for the remainder of the war, returning to Fernbrook Road when the prefabs were built.

Unlike the prefabs of Excalibur, those in Fernbrook Road were relatively quickly replaced with bungalows, and a couple of houses at the southern end, probably in the late 1950s with a pair of semis at the far end of the new bungalows.

The marriage and 1939 Register data comes via Find My Past, the details of the deaths are via the Commonwealth War Graves Commission.