We left the Quaggy close to Lee Green with a Lewisham Natureman stag ‘grazing’ by the outflow of Mid Kid Brook, before that Running Past has followed the Quaggy from its sources around Locksbottom; then on through Petts Wood, the Hawkwood Estate, Chislehurst and Bickley, through the golf courses of Sundridge Park and on to Chinbrook Meadows; through the concrete and countryside of Mottingham; and latterly through the playing fields and parkland of Sutcliffe Park and the Lee/Blackheath borders.

The river changes here; gone now are the almost bucolic feel of the river through the playing fields and parkland in the section of the river from Sutcliffe Park to Lee Green. The Quaggy is now very much an urban river, with building up to the banks and the route downstream for the fluvial flâneur often parallel with the river only visible on bridges. 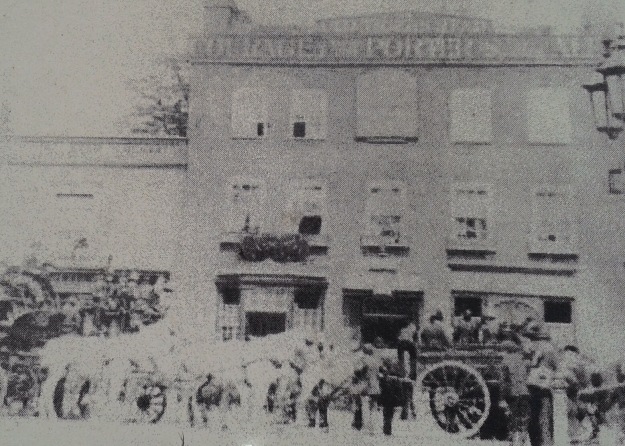 Riverside pubs have been conspicuous by their absence so far, but are a much more regular feature as we follow the last mile or so of the course.  The Old Tiger’s Head, 50 metres or so away from the river, was the base for the mid 1840s horse racing of the Lee Races. Lee Green was still rural then, complete with a green, a windmill and a farm – Lee Green Farm. The pub was very different then, being rebuilt in the 1890s, as the picture above from an information board at Lee Green shows.
The Quaggy squeezes between some 1990s flats and a plot of land that was Victorian housing and will presumably be returned to housing again; it was latterly the showroom of Penfolds Vauxhall dealers, after they moved from the former Lee Picture Palace on the corner of Bankwell Road.  The river, for a short period, is again banked and bedded in concrete – little is able to grow but that didn’t stop a few optimistic sticklebacks from attempting to eke out an existence in a hostile environment (below, top left) when I did the research for the post.

The Quaggy emerges out into the open at what used to be called Lee Green Bridge and the first proper riverside pub, the Duke of Edinburgh, still serving and with a pleasant garden at the rear.  The pub dates from around 1871 when the landlord, a Mr W Baker, took over licence of the Black Horse, which was a short-lived ‘beer house’ that may have been on the same site (1)

The river forms the rear boundary between homes in Lampmead and Brightfield Roads – the former named after a field. The course wasn’t always thus, the Quaggy originally took a course further to the north touching the southern end of what is now Lenham Road.  The differences are clear between the 1863 (top map below) and 1893 visits of the Ordnance Survey Cartographers (maps on a Creative Commons via National Library of Scotland). The effective development of Lampmead required the straightening of the river, following what was previously a path behind the houses of Robertson Street, which was to become Brightfield Road at around the same time.  The curved building (above, top right and bottom) hugs the banks of the river. 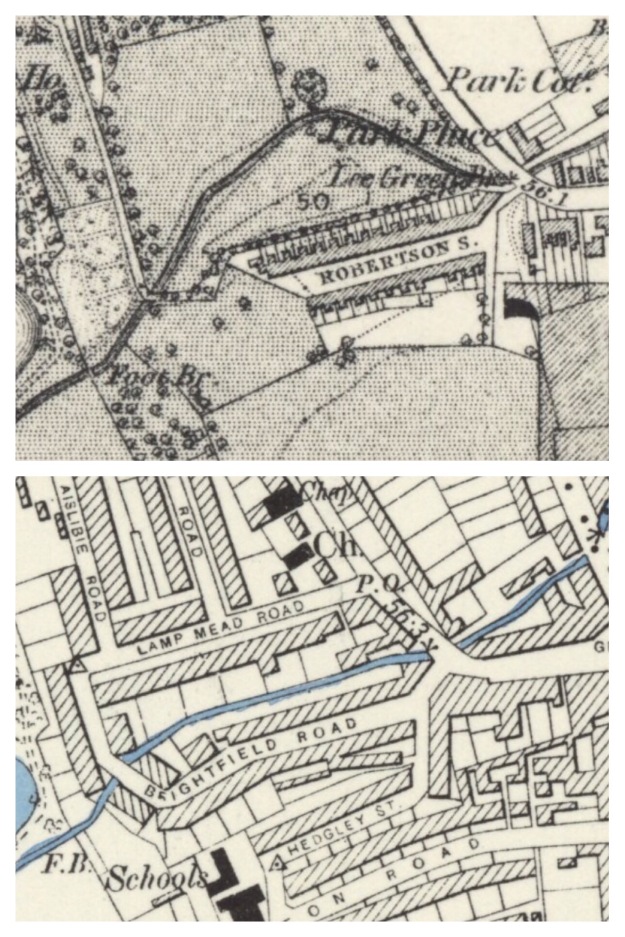 The Quaggy is bridged by the dog-leg of Brightfield Road before tumbling down into Manor House Gardens.  The Gardens are one of Lewisham’s flagship parks and were the grounds to a large house built and maintained from the proceeds of slavery until bought by the London County Council as a library and park in 1902.

The Quaggy seems to have originally fed the small lake although is now at a much lower level.  It is bridged a couple of times within the park, both having been the venues for generations of Pooh Sticks, no doubt played before the game was named in the 1920s by A A Milne. 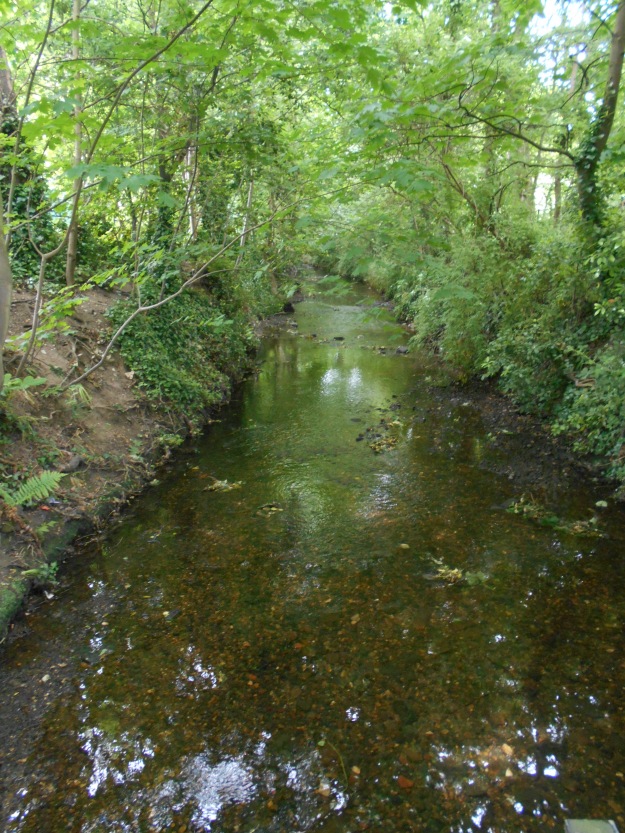 The river has natural earth banks topped with a dense tree canopy throughout its 400 metres or so through the park, during the summer the river is heavily shaded.  The steep banks make the river relatively inaccessible through the park.
Flowing out of Manor House Gardens, the river crosses Manor Lane, an old farm track and again forms a boundary – between the WJ Scudamore homes of Thornwood Road, a Lewisham Council sheltered scheme off Manor Lane and later more Scudamore homes on Manor Park.  This was a largely rural area until Hither Green station was build in the 1890s, there was a junction there from the 1860s, as the 1870 map below  on a Creative Commons from the National Library of Scotland) shows. This part of Lee was still used for market gardening, mainly run from Manor Farm, until the Scudamores built homes of what was marketed as the Manor Park Estate..

Over the other side of Manor Park the river turns almost 90 degrees, to flow between more gardens, between Manor Park and Longhurst Road, briefly visible by peering around a bridge on one side of Staplehurst Road – close to the shops posted about earlier in 2017.  Just before the bridge the river is joined by one of its tributaries, Hither Green Ditch (Quaggy Hither Green). 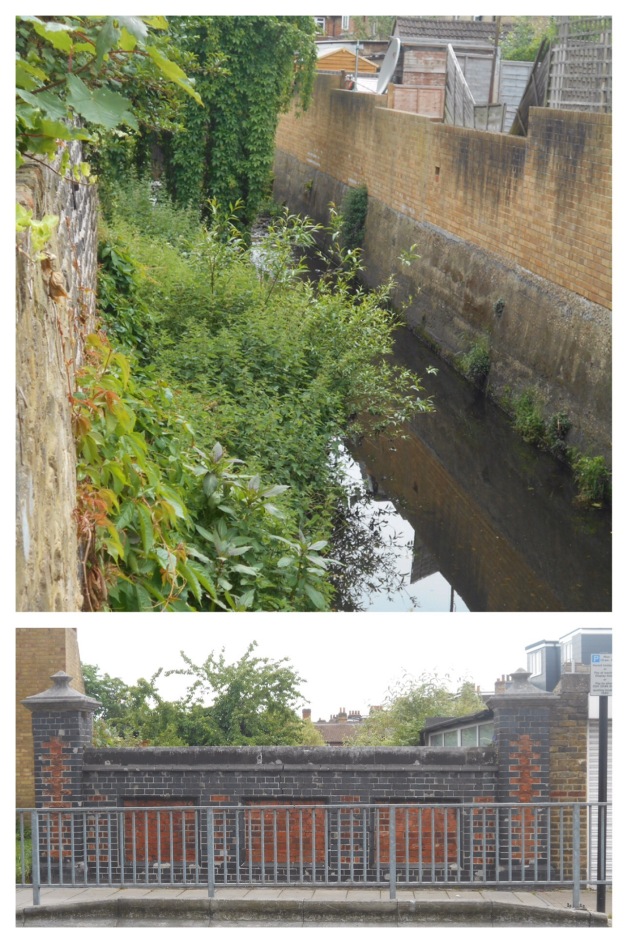 The river continues northwards, squeezing between the gardens of Manor Park (the street) and the northern end of Longhurst Road before opening out into Manor Park (the park rather than the street).  The park’s rejuvenation has been covered before in Running Past, the former small pig farm has gone from one of Lewisham’s worst bits of open space to one of its best.  The Park has become a community hub – centred around the Arts Cafe.  The river itself is used much more – including the annual Quaggy Duck Race and the Float Your Boats event in June 2017, pictured below.
The Quaggy itself while having a ‘natural’ feel at the end of the back gardens of Leahurst Road, was concrete encased and hidden from the park on  the opposite bank.   Flooding used to be common in this area – in the mid-1960s, the then MP for the area Chris Chataway described residents as living ‘in fear of this wretched stream.‘

At the edge of the Park, there is a bridge – while the structure is a new one, the crossing an old one – it was the final section of Hocum Pocum Lane – an ancient path from Lee High Road to St Mary’s Church, and possibly beyond.

We’ll leave the Quaggy here for its final section to its confluence with the Ravensbourne in Lewisham.
Notes