Running Past has covered several of the leading members of the Women’s Social and Political Union (WSPU) in Lewisham and Blackheath – May Billinghurst, Caroline Townsend, Eugenia Bouvier as well as the locally born Emily Wilding Davison.  Another of the prominent local militant suffragettes was Clara Lambert who lived at 174 Glenfarg Road on the Corbett Estate in Catford.  Clara went by a number of aliases too – Catherine Wilson and May Stewart.

Clara came from a very different background to many of the other active suffragettes – she was working class, having worked as a seamstress and in the family laundrette.  Many of the local ones such as Eugenia Bouvier and May Billinghurst, were from much wealthier backgrounds – reflecting Lewisham’s then position in the newly developing south London suburbia.

Clara joined the WSPU in 1903, around the time that it formed.  While her address in arrests is usually given in Catford, she was certainly involved with the setting up of the WSPU branch in Walthamstow in 1910.

Clara was one of 300 suffragettes who met at Caxton Hall in November 1910 on what became known as ‘Black Friday’ and then marched to Parliament to attempt to lobby Asquith.  There was considerable brutality from the police and hostile bystanders, including sexual assaults.

It was noted in ‘The Vote’ that women were ‘thrown down, cuffed, pushed, gripped, pinched, battered, bruised, thrown back again and again by police and rowdies.’ ‘Arrest followed arrest’ with those arrested including Clara Lambert (1).

115 women, along with four men, were detained on Black Friday, but the following morning Winston Churchill, the Home Secretary, dropped all charges on the grounds of public policy ‘on this occasion no public advantage would be gained by proceeding with the prosecution.’

In March 1912 the WSPU started a programme of window smashing, described in one syndicated paper as an ‘exceptionally malignant attack…. (with) wild scenes in London.’ (2) The sheer scale of the attacks one weekend overwhelmed the police in central London; this related both to the numbers of angry shop and business owners all wanting to press charges as well as noisy suffragettes who kept up a barrage of chants of “Votes for Women”‘ which echoed around the police stations of the centre of the capital.  Clara along with many of the others had her bail surety given by Frederick Pethwick Lawrence.

The case was heard a few days later and Clara pleaded guilty (3)  to smashing the windows of 5, 6 and 9 The Strand (4), close to Charing Cross, with a hammer.  The businesses were Joshua Turner, a hat and cap make; Samuel Smith and Son, speed indicator makers and the London and South Western Railway booking office.  She refused to give an undertaking to be bound over to keep the peace, so was sentenced to 4 months in prison (5).

Her parting shot after being sentenced was that “I shall come out of Holloway more determined than ever.”  (6)

Clara actually ended up at Aylesbury Prison, along with several others sentenced at the same time.  She was released on 15 June and greeted at 10:26 arrival on that day at Marylebone Station by a crowd of suffragette well-wishers (7).

While the spell in Aylesbury Prison was the first for Clara, it wasn’t her last.  She was again arrested in late January 1913 after another bout of window smashing – on this occasion it was the windows of the Hamburg American Line in Cockspur Street off Trafalgar Square.  She was arrested with Olive Llewhellin who lived in Burnt Ash Hill in Lee – both were remanded in custody, although Olive Llewhellin was later discharged (8).  Clara is top left and Olive bottom right on the photograph below (see picture credits).

She was committed for trial for ‘wilful damage’ in mid-February 1913 (9) before being tried in front of an all-male jury – women were not allowed to serve on juries until 1919.

She expected little sympathy from the jury “I have not come to appeal to your intelligence because I have come to the conclusion that men do not have any.” Clara was sentenced to six months imprisonment which was described as being ‘vindictive’ in ‘The Suffragette’ (11).  On hearing the sentence she told the court (12):

I shall not accept imprisonment under any circumstances. I shall do the hunger strike, and if it means my life to save the lives of thousands of other women, it must be so.

She was probably released under the ‘Cat and Mouse Act’ which came into force mid-way through her sentence.  There had been considerable public disquiet about hunger strikers being force-fed by the prison staff, the act allowed prisoners to be released on licence as soon as the hunger strike affected their health. Woman were allowed a predetermined period of time in which to recover after which they were rearrested and taken back to prison to serve out the rest of their sentence. 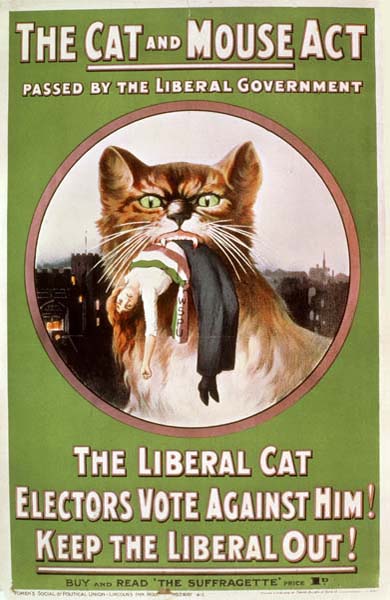 On 16 March 1914, she entered the House of Commons in male clothing with a male companion and made her way to the Central Lobby, presumably the security in the early 20th century was less tight than the airport style checks for current visitors.  It seems that the police based in Parliament had been warned by Special Branch ‘to be on the alert to detect a woman who dressed as a man.’  She was noticed by a Constable on entering the Commons and followed to the Central Lobby and when she sat down she was then arrested.  When searched she was found to have a riding whip hidden in her left overcoat sleeve.  She was charged under the Vagrancy Act with being a suspected person found in an enclosed area; she was said to have replied to the police when charged, “If I had carried out my purpose they would have had it hot.”  She was subsequently sentenced to six weeks’ hard labour.

The whip has used by several militant suffragettes – notably by Helen Ogston at the Royal Albert Hall when she attacked those attempting to remove her after a protest against Lloyd George there.

Clara was again released early under the Cat and Mouse Act.  Her next arrest seems to have been in early April 1914 for smashing a number of glass cases and a porcelain saucer in the Asiatic section at the British Museum with a butcher’s cleaver. Clara was thought to have smuggled in the cleaver under her skirt.

The case appears to have been heard under her alias, Mary Stewart (13), at Bow Street Magistrates Court, where she was described as being ‘in a very excited manner began to shout and declaim’ to the magistrate, refusing to recognise the authority of the court.  Her hearing was adjourned for a few hours but but when she returned she was ‘disorderly and continued speaking loudly’ while two officers held her firmly in the dock.

Presumably she was bailed and absconded because on 24 April 1914, Scotland Yard circulated a memorandum to all police stations in the country featuring a Special Branch surveillance photograph (below – see picture credits) her giving her details: she was five feet one inch tall, had a sallow complexion, brown hair and grey eyes – along with a surveillance photograph.   She wasn’t on the run long and was arrested and sentenced to six weeks hard labour.

There were a couple of other incidents which were noted in the records of her friend Violet Croxford – Clara apparently planned to attack the Prime Minister, Herbert Asquith, at Waterloo Station on his way to a wedding with a whip that she had concealed.  She missed him there, followed him to the wedding and took a taxi to the venue, but again missed him but set fire to a haystack instead.

She claimed responsibility for throwing an over-ripe tomato which hit Public Prosecutor, Mr Archibald Bodkin, during the trial at the Old Bailey for arson of fellow WPSU member, Rachel Peace in 1913 (14); she was arrested and held until court rose.

So who was Clara Lambert?  She had been born in or around West Ham in 1875; certainly that is where her birth seems to have been registered, although in censuses she was variously reported as being from Walthamstow, Hackney and London (Middlesex).  It was a family that had moved around a lot her parents (George and Elizabeth) were living in Bethnal Green in 1871 with 4 children.  The eldest of those seems to have died by 1881, but there were still 9 children (all of school age) of which Clara was the 5th oldest at the home in Hackney.  George was listed as a ‘Coffee Tavern Manager’ which seemed to be the only income coming into the home which was shared with another couple.

By 1891 the family had moved south of the river and were now in Plough Road, Rotherhithe – there had been another child in the intervening decade although the older of Clara’s twin sisters was no longer there.  George was now a ‘Book Keeper in the Iron Trade’ and the older children were all working – including Clara who at 16 was listed as a dressmaker and her two remaining older sisters who were both listed as laundresses.  By 1901 the involvement in the laundry trade seemed to have increased with George listed as a laundryman, Clara and her youngest sister, Edith, were collar dressers, presumably linked to the laundry trade, and the oldest sister at home, a shirt dresser.

Whether George’s involvement with the laundry is as worker, manager or owner isn’t clear.  However, by the 1906 Kelly’s Directory some, or all, of the family had moved to Glenfarg Road and Arthur Lambert, one of the son, was listed as a laundry proprietor – the location of the business was listed as Glenfarg Road although this seem unlikely in a small terraced house.  This was the just built suburbia of the Corbett Estate, and while not one of the biggest houses, was a step up from where the family had been living before, and suggested that the family laundry business was doing well.

The 1911 saw many suffragettes evading being returned in the census.  At Glenfarg Road only two of Clara’s brothers, Arthur and Frank, and a sister Jane were listed.  It is almost certain that Clara was living there – court reports from before and after list her in Catford.  It may be that here mother and other sisters were ‘evaders’ too.  The family seems to have moved on by the time the First World War finished as the business wasn’t listed in Glenfarg Road in the 1919 Kelly’s Directory.

During World War 1 Clara somewhat surprisingly joined the Women’s Police Service (WPS) where she seems done social work type activities in South Wales.  She continued to campaign for votes for women after the War – speaking at a “well attended meeting” in Lewisham Market in June 1918 (15).

She met Violet Croxford in the WPS and the pair of them continued with similar work in London’s West End with Dick Sheppard and later set up a women’s refuge in Kent.  In the 1939 Register, they were living in South Road, Hythe, and both listed as ‘Boarding House Proprietress.’  They retired and moved to Farncombe, Surrey in 1953, where Clara lived until her death in 1969; Violet lived until 1985.

Census & related information come via Find My Past