There are a number of streams (or former streams) that we have already covered that rise in the high ground that stretches from the borders of Croydon to the borders of New Cross – in the past covered by woodland known as the Great North Wood. Running Past has covered (and named) several of these including Penge Stream, Adams’ Rill, Wells Park Stream and the River Willmore.

We now turn our attention to another group of streams whose sources are very close to another covered – Pissarro’s Stream.  It doesn’t seem to have a name that has survived, but for the purposes of identification has been called Porcupine Stream here – the reasons for this became clear in John Rocque’s map of the 1740s (above), we’ll return to the farm later.  The map suggests around four sources – some of which are above Charleville Circus and others currently within Crystal Palace Park.  It is this latter group that we turn our attention to first.

More than perhaps any small section of south east London, the moving of the Crystal Palace to the top of Anerley Hill in 1854 saw massive changes to the levels of land, obliterating former contour lines and altering flows of streams.  Streams were ‘stolen’ to help provide the water for the large array of fountains and cascades within the Park, although with the help of Brunel, two enormous water towers recycle water from the large reservoirs in the middle of the Park which provided the bulk of the water.

Despite the changes to the landscape, a small valley is visible high up in the northern corner of the Park and point to a former stream that would have fed what is now the small lake in front of the decaying Concert Bowl, sometimes referred to as the ‘rusty laptop’. There is  a small flow behind the Concert Bowl which follows the course the stream would have followed to fill the one of the many reservoirs that were created in the Park, which is now referred to as the Fishermen’s Lake.  Whether it now contains water diverted from the original stream’s course is unclear.

Before moving on, the Concert Bowl used to be a significant venue for the summer outdoor festivals – it was a stage that once saw the likes of Pink Floyd,  Steve Harley & Cockney Rebel and The Cure perform. As the 1863 surveyed Ordinances Survey map shows, in the years after the opening of the Park that corner was home to quieter activities – an archery range and the English Landscape Garden. 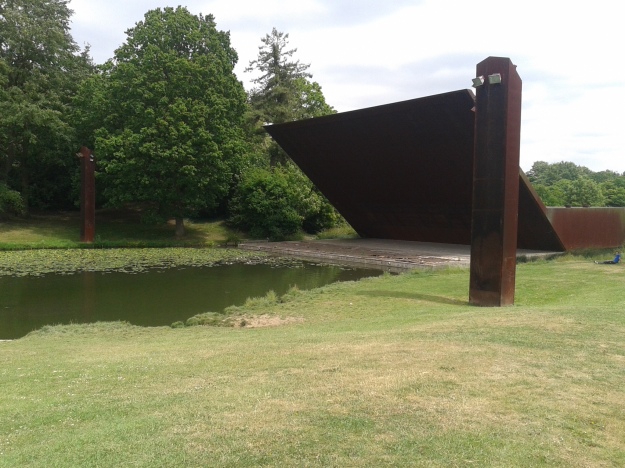 Any flow beyond the Fisherman’s Lake would have been into the now lost North Basin (see Ordnance Survey map above).  There used to be an implication in a now deleted on-line Environment Agency document that any excess water was diverted to the eastern end of the Park seemingly to join the stream coming down from above Charleville Circus and Ordnance Survey map contours suggest that this was probably the original route anyway.

We have ‘visited’ Charleville Circus before, as the source of Pissarro’s Stream is just to the east of it.  To the north-west of the Circus, in the apex of Westwood Hill and Crystal Palace Park Road – currently home to an imposing 1930s mansion block, Torrington Court, are the other sources of Porcupine Stream. While Rocque’s map suggested three or four sources, the upward pointing contour lines of fluvial erosion only highlight one of these.  The route above Charleville Circus is through private gardens, but a fluvially eroded depression is just about visible from the main road.   Very briefly, possibly coincidentally, the route across the Circus was coterminous with a boundary which helpfully still has a pair of Lewisham Parish boundary markers in the south east and south west quadrants.

While contours suggest a deepening of the small valley down the hill, the on ground reality is slightly different with the dip only just perceptible on Sydenham Avenue and on Lawrie Park Road at the rear of another elegant 1930s block, Park Court designed by by Frederik Gibberd,.  The route followed, as the Environment Agency surface water flood risk map shows (above), is broadly along the appropriately named Springfield Road.

Considerably below the surface, the stream broadly follows the route on another line marked on maps – that of one of several railway tunnels through Sydenham Hill – this one carrying the railway between Sydenham Hill and Penge East stations.

Just below Springfield Road, the stream would have met the Croydon Canal, later to be, London and Croydon Railway– it isn’t clear whether the stream was used to feed the canal or not, some were, some weren’t.  On the other side of the railway contours would indicate a flow just off Station Road in Bredhurst Close – however, it, and it is a large ‘IF’, the stream is still flowing culverted it may have been moved a few metres to the south as there is always the sound of rushing water below a manhole cover close to the junction of Crampton and Station Roads (it could, of course, be just a very active sewer…).   before a confluence with the branch coming from the Park close to the elegant Penge East station.

The rushing water has never been regularly heard from other manhole covers in the area and contour lines imply a route under the current railway close to Penge East in the direction of Parish Lane.

What is now Parish Lane was once home to Porcupine Farm – it was active from the mid-18th century in Rocque’s map (see above), probably earlier, until 1851; it is listed in a directory with William Wrenn being the farmer, published that year.  It is possible that the farm had been first leased by Wrenn’s father in 1800 – there is evidence of a lease in Penge to another William Wrenn in 1800.

It has also been suggested that it may have also been a pub.  However, the farm wasn’t mentioned in the 1851 census and while William Wrenn was probably still farming it, he was listed as farming 100 acres with 4 labourers but living on the main Beckenham Road.  The farm buildings were still there, but weren’t mentioned by name in the 1863 surveyed Ordnance Survey map.  Without the farm it was referred to as Porcupine Meadow and was sold by the Duke of Westminster to the Metropolitan Association for Improving the Dwellings of the Industrious Classes.  The idea behind the scheme was to build workers cottages close to stations.

164 small semi-detached houses were built on Porcupine Meadow between 1866 and 1870; the financing of the scheme was based on

…working men are prepared to pay down a deposit of £10 and enter into the necessary arrangements for securing the absolute ownership of a cottage and garden at the end of 12 or 13 years by paying a weekly sum which would cover all expenses and yield a liberal rate of interest for the investment in the meantime.

1851 census data comes via Find My Past