At the time of the anniversary of evacuation Running Past, started to look at some of the preparations for war on the ‘Home Front’ with Lewisham children being evacuated to Kent then Surrey.  We return now to some of the preparations that were made to try to keep the civilian population that remained in Lewisham as safe as possible from the air attacks that were expected soon after war broke out – looking here at air raid shelters.

In theory, planning had started just after World War 1 with the setting up of the Air Raid Precautions Committee in 1924.  As regular readers of Running Past will recall, there had been devastating air raids during World War 1 on both Glenview Road in Hither Green with a Zeppelin attack (above), and with a Gotha airplane attack on Sydenham Road which also bombed the area around Staplehurst Road and Hither Green Station. However, little progress had been made because of the apparently irreconcilable conflict between the need to send the public underground for shelter from air attack but the need to keep them above ground for in the event of gas attacks.  The latter had been expected as a result of gas attacks during World War 1.

During the Munich Crisis of September 1938 the Government instructed local authorities to start building trench air raid shelters with precast concrete walls which were then covered.  They became a permanent feature in the lead up to war.

There were a series of public shelters in Lewisham High Street under the planted area that ran down most of the market (see above from a couple of decades before World War 2) – they had to cope with day time raids when the town centre would be busy (1). One of these was to be hit by a V-1 flying bomb in July 1944. There were also large public shelters opposite Lewisham Hospital and in the grounds of Robertson’s Golden Shred works on Bromley Road (2).

Running Past covered a couple of the Lee shelters that were located in Manor House Gardens – one in the Ice House, and the other seemingly under the grass almost next to it – the likely outline appeared in the drought of 2018.  A third was under the lawn in front of Manor House Library was mentioned in passing in the Lewisham ARP log (3).

A large one was also constructed in the grounds of Merchant Taylors’ almshouses (above), although it isn’t clear whether this was just for the inhabitants of the almshouses or for wider use.  There is a ‘ghost sign’ on the external wall to the almshouses on the corner of Brandram and Lee High Roads – although it has faded and it isn’t certain whether it is pointing to Manor House Gardens or the almshouses.

Some local streets also had communal shelters too – one is shown at the back of a photograph of a VE Day street party in Taunton Road in Lee.

The public shelters were not bomb-proof and many people were killed in direct hits – this included one on the Albion Way shelter in Lewisham where 41 people died on 11 September 1940.  There was another street air raid shelter in the next road – Mercia Grove.  Memories of which were included on the BBC website around the 50th anniversary of VE Day – which was described

At the bottom of the stairs there were four bays. Each bay had a wooden slatted seat at either side, along its length. …We soon made the shelter comfortable, with rugs for the floor and a paraffin stove for warmth and to boil a kettle. We slept on the floor and on the benches. After a while, bunks were installed. These served as seats during the day when it was a public shelter and at night we were issued shelter tickets and a designated bunk number. .. Soon there was a sink installed and a small portable oven, for which we paid a small rental fee. When the blitz was at its height we went down at 6.30 after the evening meal, until the all clear, or until it was time to get ready to go to work the next day. On the long summer evenings (double British summertime) we played gramophone records in the street and danced to the music, when all was quiet, no Jerry’s above.

Other locations too were used as air raid shelters, including underneath railway arches, such as those in Ladywell which, like its Lee counterparts, had a painted sign showing the way to it which still survives above it.

Below, a probably more permanent one than was possible under the arches in Ladywell is pictured from elsewhere in SE London. There were also railway arch shelters at Plough Bridge (sheltering 40, close to Lewisham Station); Morley Road (95) and Catford Hill (105) (4).

Elsewhere in London tube stations were used, but this clearly wasn’t an option in south east London. Initially cellars and basements of larger houses, churches and factories were also used but their use brought with it dangers of collapse of the building above with heavy masonry or machinery coming through from higher floors.   A few buildings built just ahead of World War Two were built with air raid shelters, such as one in East Sheen, covered in the excellent Flickering Lamps blog.

One of the stranger public shelters used by Lee and Hither Green residents involved catching a train to Chislehurst to shelter in the caves; even when London had been free of attacks for a couple of months in July 1941, 2,000 still sheltered there every night (5).

Not all air raid shelters were communal ones, it wasn’t always feasible for people to quickly get to the public ones, so individual household ones were developed – Anderson shelters (below) which were external and the internal Morrison ones. 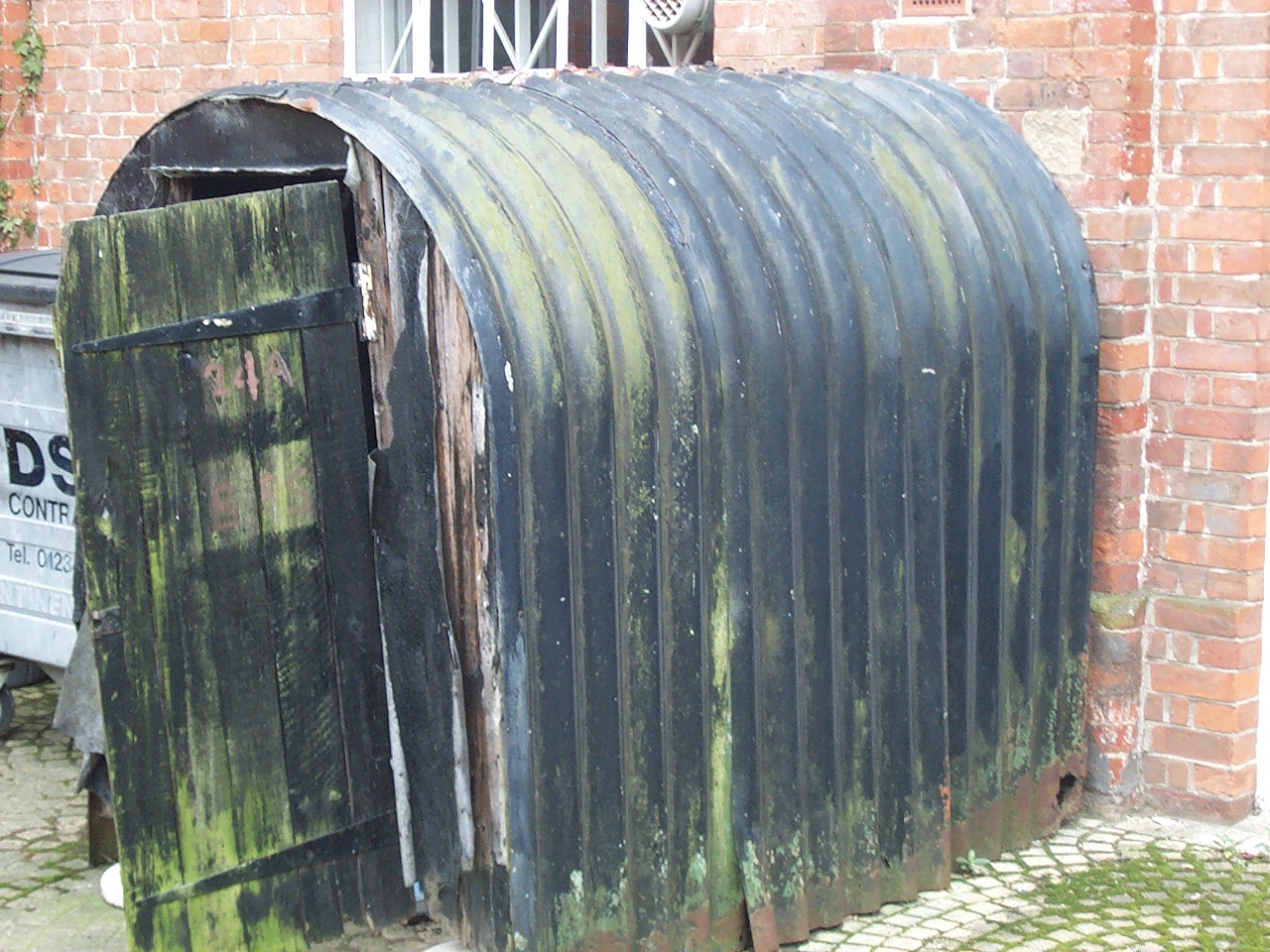 Anderson shelters were named after Sir John Anderson, who was the Government Minister responsible for air-raid precautions prior to the outbreak of World War II.  They were made from 14 galvanised steel panels bolted together and were 1.8 m high, 2 metres long and 1.4 metres wide, and were buried 1.2 metres deep and then covered with 40 centimetres of soil.  They ‘housed’ six and were issued free to all householders who earned less than £5 a week, which was most people in areas such as Lewisham; those with a higher income were charged £7 for them.  In Lewisham around 23,000 were issued – so about 192,000 could be accommodated (6).

Running Past visited a partially fictional Anderson shelter on the Brockley/New Cross borders when looking at one of the early works of one of Lewisham’s best known authors – David Lodge’s Out of The Shelter.

While they performed well apart from dealing with direct hits, as they were buried in the ground they tended to be cold and damp, not the place to spend lots of consecutive nights – something common at the height of the German Bombing campaign.  The level of waterlogging led some Lewisham families to go back to the original advice and hide under the stairs.

My former next door neighbours  Jack (actually George) and Doris had an Anderson Shelter in their garden which was still dug into its original place by his first wife’s parents; while the soil covering of the roof was removed, they used it as a shed until they died in the late 1990s.  This was not uncommon – while local authorities collected the shelters as scrap many hung on to them, with several memories of playing in them in and around Lewisham into the 1960s.

Morrison Shelters were indoor shelters which, in theory at least, could be used as tables between air raids.  They were named after the Minister of Home Security at the time that they were first issued – Herbert Morrison, who was to become Labour MP for Lewisham South in the 1945 General Election.

Pictured below, they were effectively a cage 2 metres, by 1.2 metres and 0.75 metres high with a steel plate top and mesh sides. They had to be assembled IKEA-like by the household, with tools supplied.  Like the Anderson Shelters, they were provided free to low income households.  Around 500,000 were distributed during the Blitz with a further 100,000 ahead of V-1 attacks.  They were much more effective than the Anderson Shelters in preventing protecting households even withstanding some direct hits.

In posts in the not too distant future we will look at other World War 2 preparations on the Home Front – gas masks, warning sirens, the Women’s Voluntary Services and the Air Raid Precautions (ARP) wardens.