Running Past has covered several of the current and past buildings around Lee Green, notably Lee Green Farm and the closed pubs, the Prince Arthur and the New Tigers Head as well as a little on its more ancient version, the Old Tiger’s Head, in connection with the Lee Races of the first half of the 19th century.

In the north eastern quadrant is one of the most impressive bits of municipal architecture in the area, the Grade II listed fire station. We will return to that building later; however, it seems to have been at least the third Fire Station in the area. There had been one in Weardale Road by the late 1870s (1), presumably close to the Rose of Lee based on what else had been built at that stage in the road.  Weardale Road had still been known as Hocum Pocum Lane little more than a decade before. 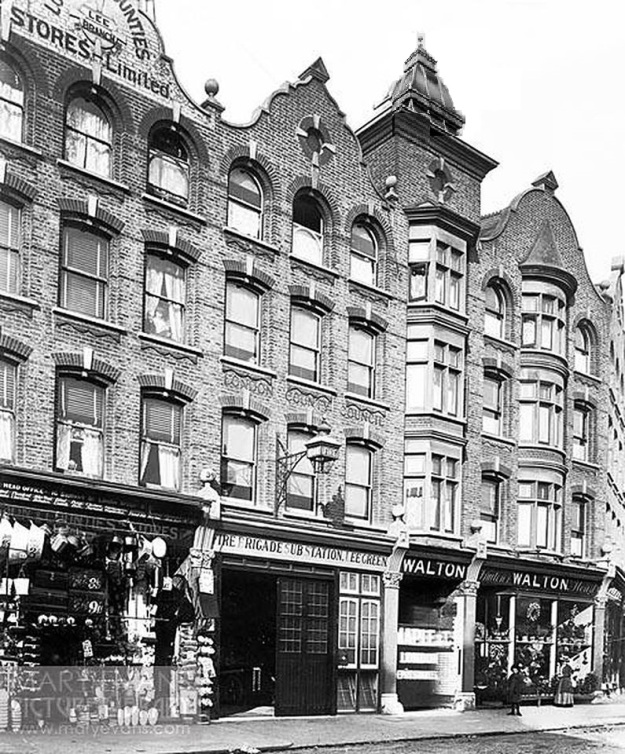 The next one opened by the Metropolitan Fire Brigade in 1895 was on the Lewisham side of Lee Green in the same group of buildings as the Old Tigers Head (see above). It was in an attractive group of four storey properties which have very distinctive Dutch gables. There used to be a tower in the middle of them but this appears to have been damaged in World War 2.

The site had originally been the stables for the ‘old’ Old Tiger’s Head and these seem to have been used for a while by Thomas Tilling for stabling the horses for their buses (like at 36 Old Road) – that was certainly the case in the 1888 edition of Kelly’s Directory. The courtyard entrance to the pub and stables remain with an alley with a ‘garage’ ghost sign above it.

The terrace  predates the ‘new’ Old Tiger’s Head pub by a few years – whose rebuilding was completed around 1896 (the façade is dated). The earlier building of the terrace allowed the pub to temporarily move to what became the fire station. The pub had previously had an address of 345 Lee High Road, but while it kept its number after the temporary move; by 1895 it was flanked at 343 by a hosier Alfred Trusson and at 347 to 349, a long lost type of retail outlet – a mantle warehouse, run by Alexander Aitken.

The fire station opened by 1896 once the pub had moved back to its newly rebuilt old home. In the 1900 Kelly’s Directory its neighbours were the grocers and related shop, the London and Counties Stores (see photograph above). Alexander Aitken was still selling mantles and the pub was numbered 351. By 1905 the mantle trade had moved on, 347 was empty and 349 was a chemist. After the Fire Station’s move to what would have been described at the time as ‘more commodious premises’ 345 seems to have remained empty until the late 1920s (see note below). The former fire station (and pub) is now home to Mandy Peters Solicitors. 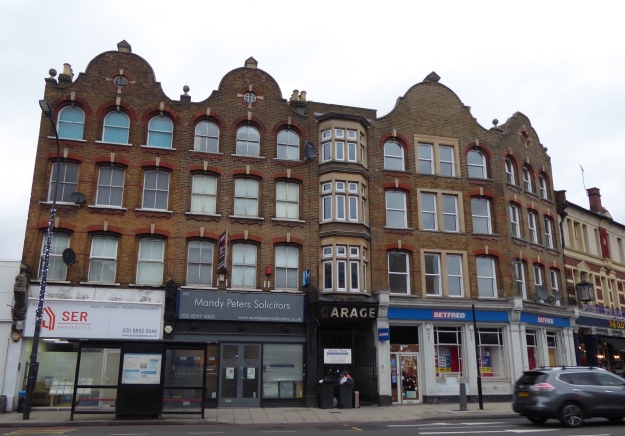 The new fire station was designed by the Fire Brigade Branch of the London County Council Architects Department and opened in 1906 and was Grade II listed in 1973. The architectural team within the LCC had originally worked in housing and included Owen Fleming, who was better known for his work on the Boundary Estate in Shoreditch.

The listing notes for Lee Green Fire Station remark that it is ‘notable for having two elevations of architectural quality in the Arts and Crafts-style to the south, with a cross-gable, and to the east.’ 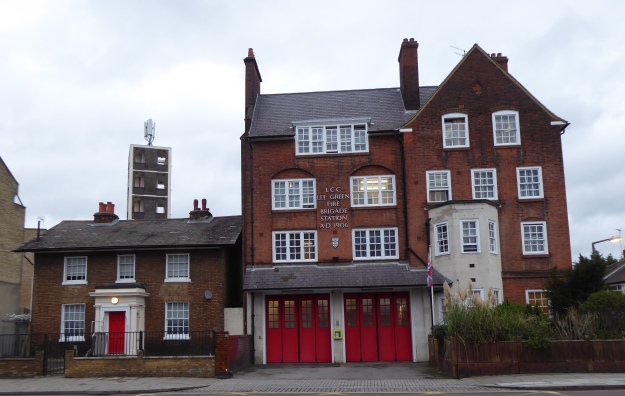 The Arts and Crafts style probably reflected that it was a Fire Station built in then suburbia and while Lee Green Farm had been lost as the Crown Estate sold off parcels of land for development from the 1860s, the neighbouring Horn Park Farm was to survive until the 1930s.

The materials used at the fire station are described as 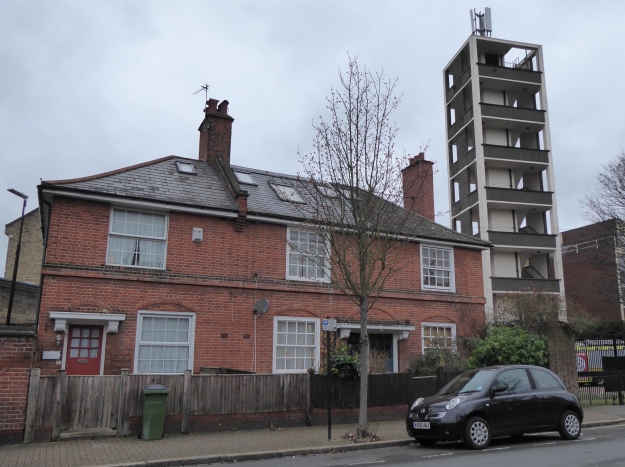 There was accommodation for firefighters included within the station itself, as was common at the time of building, and in a couple of houses behind the Fire Station in Meadowcourt Road (pictured above) as well as in an early to mid 19th century detached, yellow brick house, 7 Eltham Road (see main photograph of Fire Station). Royal Greenwich locally listed 7 Eltham Road in 2019, describing it as

I& Eltham Road may have been acquired by the Fire Brigade after the station was built and it was noted in Kelly’s Directories of 1905 and 1911 as being home to a William Issott. Any earlier detail has proved difficult to unpick due to changes in names and numbering of the houses in the late 19th century.

The new station seems to have been one of the first to have been entirely motorised with two petrol engines and a steam powered one – the fire engines pictured outside at the time of the opening in December 1906. 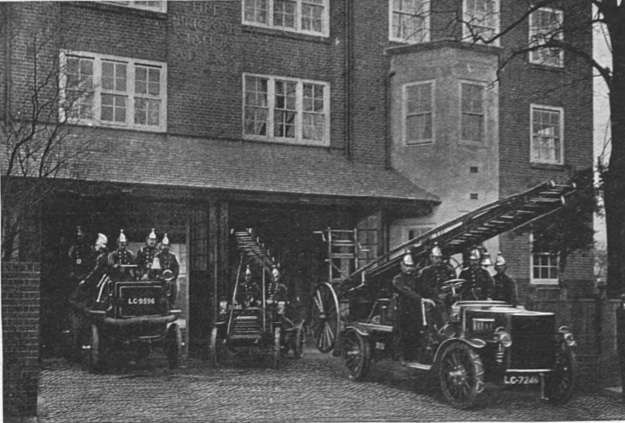 While many of the local fire stations of the era have closed, such as Forest Hill in Perry Vale, and Lewisham’s, towards the southern end of the High Street, which was replaced 150 metres away, Lee Green has survived both rebuilding and closure programmes over the years; long may that continue!

The photograph of the original fire station is from the collection of the Mary Evans Picture Library in Blackheath, it is used with their permission.

The Kelly’s Directory information comes from Southwark Archives, I have copied data from every 5th year – so a few short term stays may be missed.

4 thoughts on “The Three Fire Stations of Lee”