Campshill was one of the larger houses on Hither Green Lane – it was home for a few generations to some of the wealthy of Victorian society. It declined during the 20th century being demolished to make way for post-war council housing.  It was built in the mid-1820s after Henry Lee had leased the land from Trinity College and built Campshill House. Henry was a brick maker and lime merchant who had previously lived with his brother, Henry, at Ellerslie House, close to their works on Loampit Vale.

One of the next inhabitants was James Allan who bought the House in 1861.  He was an Aberdonian, born in 1811, he had worked for a variety of Scottish shipping based employers before moving to London with one of these which was to become the Peninsular Steam Navigation Company, later the Peninsular and Oriental Company (P & O).  He was to become Secretary, then Managing Director in 1848 – a position he held until his death in 1874.

Allen’s career was described as

one of steady industry and intelligent supervision. Without marked energy either of intellect or of action, his progress was rendered sure by the wisdom of his judgments, which were singularly undisturbed by any emotion of interest or of temper, and by his amiability of character, which disarmed hostility.

The lease for the house was put up for sale in 1879, with an advertisement in The Times describing it as a ‘capital family residence’ (2)

The purchaser may have been a W. H. Smith who lived at the House in the 1880s and 1890s, he wasn’t connected to the eponymous booksellers; the son of the founder of the stationers lived in altogether more grand Grosvenor Place, but may have known Campshill’s W. H. Smith, as both were members of the London Library.

Campshill’s W. H. Smith seems to have owned a firm of Gibraltar based shipping agents, Smith Imossi and Co, which still is in existence.

In the early inter-war years the Campshill House, was home to a glass bottle merchant and then a garage.   By 1927 it was home to Henry Thomas Taylor and John Belmont Taylor; the latter was a surveyor, he was in partnership with Horace William Langdon but their partnership was dissolved in 1927.  The quantity surveying firm he left behind was to become internationally successful; continuing today as Langdon & Seah.

Henry Thomas Taylor, who was almost certainly John Belmont’s his uncle.  Henry Thomas Taylor had been one of the brothers who had developed the Edwardian estates of Belmont Hill and Park Langley. The other brother was John, John Belmont’s father.  Presumably, the Belmont middle name was a reference to the Lewisham estate that was being developed at the time of his birth.

They bought sites in Langley Way on the Hayes/West Wickham borders in 1929 and The Crescent, Hayes, in 1932 and 1933. By the latter purchase, Henry seems to have moved back to the Beckenham area.

The name had changed to ‘Canada House’ by 1929 – the name is thought to refer to the billeting of Canadian troops at the House during World War 1.

It seems likely that Taylor was the last occupant of the House.  According to the Lewisham Air Raid Precautions (ARP) log, it was hit by a V1 rocket at 01:39 on 27 July 1944 – the rocket was listed as hitting ‘Hither Green Lane between Thornford Road and Ryecroft Road.’ There were no deaths, but three were injured and there was a fire. While the log noted that the fire was brought ‘under control,’ it wasn’t enough to save the building.

The London County Council Bomb Damage Maps 1939-1945 (3), shades the main house as a dark blue, one step better than ‘completely destroyed’ and outbuildings in purple, ‘damaged beyond repair.’ Given the amount of land that was still attached to the House it is not surprising that the grounds were quickly used for housing after World War 2.

As we have seen with other posts, there were two routes to replacement housing after World War 2 – the temporary and the permanent. The first was the result of post-war brick shortages meant that non traditional prefab bungalows were built in the parkland of Forster Memorial Park (Excalibur estate), Hillyfields and Hollyhedge Bungalows on Blackheath along with some smaller sites whether there had been large scale rocket destruction, such as Lenham Road,and Fernbrook Road  what is now the Mercator estate. The second group saw permanent homes constructed quickly and included Passfields on Bromley Road, Lewisham Hill and the Flower House estate. The cleared land from Camps Hill House was in this second category.

In any case the area had changed since the time of the Allans and Lees; as outlined in the post on ‘Hocum Pocum Lane’ which skirted the edge of the estate, the former market gardening area around Eastdown Park had been developed from the 1870s and the arrival of a station at Hither Green junction in 1895 saw the rest of the area developed.  Victorian terraced houses and the early council housing of Romborough Way and Campshill Road surrounded it. 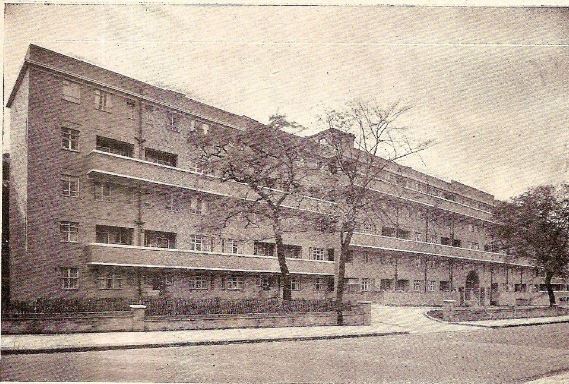 The architect for the development was  M. H. Forward, who was Lewisham’s Borough Architect, a position he held at least until 1962/63.  The the architects model which displayed at an exhibition at the Town Hall in 1950.

M H Forward was later responsible for the rather out of keeping additions to the side of Sydenham Library. In the intervening period he started the redevelopment of the old Lewisham Town Hall site which was eventually completed by his successor in 1968. The estate did have a few attractive touches like the archway that was part of Southfield House which faced onto Thornford Road.

The Heather Grove Estate was opened by the Lewisham MP, Herbert Morrison in 1948 – there is video footage of the opening with the then Deputy Prime Minister unveiling a commemoration stone and going inside the flats – sadly it isn’t publicly available.

While the new homes were built to a high standard, there were issues of affordability, something that has echoes in present new social housing, which have Orwellian ‘affordable’ rents.  It was noted by the Tory MP for Lewisham West, Henry Price in a Parliamentary debate in 1950

The rents here are 36/- (£1.80) a week, and for a four-bedroomed flat 39/- (£1.95) despite a subsidy of about 27/- (£1.35) per week. The result was that of the first 80 people to whom these flats were offered more than 40 had to refuse them because they could not afford to pay the rent. The flats had to be let to families a little lower down the list whose need was not so great but whose pockets were a little deeper.

Nothing remains of the former Campshill House, however, one feature escaped the post war wrecking ball – an obelisk remains on the grassed area to the east of what is now referred to as Benden House.  There is no inscription other than a date, 1721, but it is thought to be a memorial to an animal, (possibly a horse). The date is a century earlier than the former house, so whether it was on the site before the House or was a family monument that was subsequently moved to the site by a previous occupant is unclear.

The estate was not one that stood the test of time, while the two blocks at the rear of the estate remain, including Benden House, the blocks facing Hither Green Lane and Thornford Road was demolished in the 1980s  and replaced with attractive council houses – Canada Gardens (echoing the latter name of Campshill House) facing Hither Green Lane and Kemp’s Gardens off Thornhill Road which comes from an earlier name for the area – Kemp’s Hill.