Elmwood is a former farm house in the centre of Catford, only really visible from the side in Thomas’ Lane, although it is better known from the sign at the front on Catford Road which beckons the passer-by down an alley between shops.  The legend on the sign is now (September 2019) ‘Catford Constitutional Club.’ 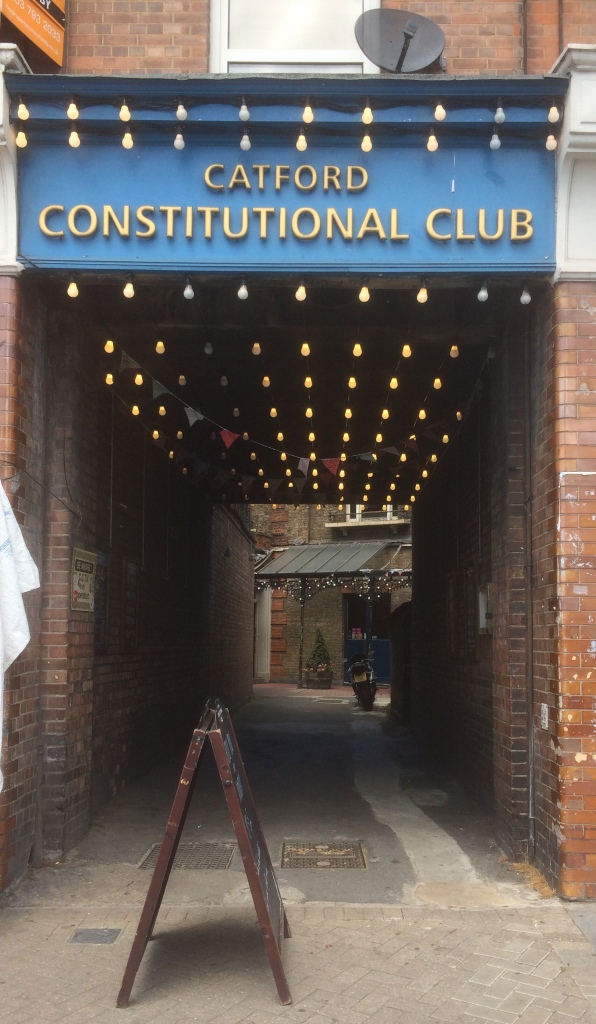 It is a building that dates from 1736, Cherry and Pesvner briefly describe it (1) as

Elmwood was built by Nelgarde Doggett who gave his name to the neighbouring Nelgarde and Doggett Roads. It was marked  on John Rocque’s 1746 map of the ‘Country Near Ten Miles Round’ London.

It is clearly shown on the Ordnance Survey map from 1863, below, there were a series of water features  (some relating to the former adjacent Manor House)- these were fed by a stream seemingly called Springfield which looks as though it flowed alongside Bromley Road.  The diverted flow into the Ravensbourne would have been around where the slight dog-leg in Doggett Road now is, with a confluence with the Ravensbourne opposite Bournville Road. The stream seems to have been completely culverted when roads like Doggett and Nelgarde Roads were built.

By the time the map was drawn Elmwood was no longer a farm.  When the census enumerators had called in 1861 it was home to George Deane, a publisher and printer, along with his family and three servants.  Deane was possibly attacted by  the railway that had come to Catford Bridge in 1857; Catford Station was not marked as it didn’t open until 1892.  Census records for Elmwood for 1841 and 1851 proved difficult to find it was not listed in any obvious form, despite trawling through every farm related census record in the area.

By 1871 it was home to West Indies Merchant, William Houston and his wife Mary, their young family, Mary’s mother and four servants.  Two generations earlier and this was a trade that would have had clear links with slavery as we found with Lee’s Manor House, but while emancipated and free in name, local plantation owners still wielded vast amounts of power and with shifts in the markets led to massive unemployment, low wages and high levels of poverty in the islands.

It was still a private residence in 1881 – home to the Harris family – William a timber merchant, Constance, their two adult children and 4 servants – including a butler. According to electoral registers they were there from around 1879 to 1883 when William Jenkins moved in.

The timing as to when it became the Conservative and Unionist Club isn’t entirely clear and information slightly contradictory. The 1891 census showed it as home to the widowed Mary/Annie Howcroft and her family. However, two years earlier there was a press notice saying that the Conservative club which was already in residence was looking to buy the lease (2).  Maybe, at that point the rambling house was being shared.

Whatever the arrangement was at that point, it was certainly the Conservative and (sometimes) Constitutional Club throughout the 20th century – the Pusey/Puzeys were there from at least 1897 and in the 1901 census were listed as Club Steward and Stewardess – their live-in household oddly included a 15 year old William Hales who was listed in the census as a ‘page.’

The need for a ‘page’ continued in 1911 when the Beresfords were running the club – it was then Herbert Booker. As World War 2 broke out 1939, the Club Steward was William Adams, born in 1907, his wife Ivy born in 1911 one person redacted (probably a daughter Beryl who was born in the summer of 1939) and Henry Webb a Post Office Stores keeper – Ivy’s brother.  The picture of the interior of the club above is from the early 1950s. 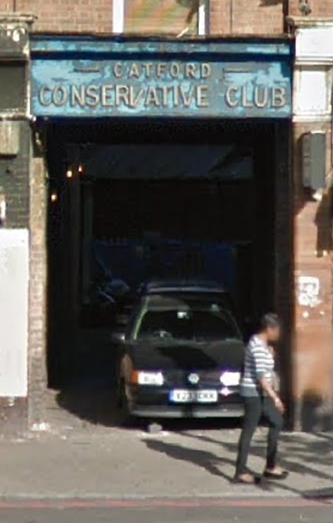 The last licensees of the Conservative Club moved out towards the end of the 20th century – perhaps SE6 ran out of drinking Tories – and by 2008 paint was peeling, Elmwood was fenced off, and the alley was used for in-the-know parking.

Pub Company Antic London took over the building in 2013, having previously run the Catford Bridge Tavern and have breathed some fresh life into the decaying building in their inimitable, slightly quirky way – renaming it the Catford Constitutional Club .   While it appeared for a while that Elmwood may be under threat from redevelopment, Lewisham Council have made it clear that they want to see the core retained in future development.

However, in mid-August 2019 further structural surveys were undertaken which found

On the basis of these quite serious risks to public safety Lewisham Council decided to ‘close the building’ to enable works to be carried out to make it safe.  Antic’s tenancy was ended as part of the same process, it is the end of an era and the building enters another period of uncertainty.