With Lewisham introducing a 20 mph zone on all the roads they control from 1 September 2016, an article in the ‘Illustrated London News’ from the 1930s caught my eye – it looked at concentrations of accidents within London, based on data from the Ministry of Transport for the six months to the end of September 1934 (1).

There were four stretches of London road identified as being particularly prone to accidents:

There were around 100 accidents between New Cross and where Lewisham Clock Tower is now situated (see below, 2), with a real concentration in Lewisham town centre.  In case you were wondering, Lewisham Road station was on Loampit Hill, opposite Tyrwhitt Road, the building is now used by Aladdin’s Cave, a salvaged furniture and fittings dealer. 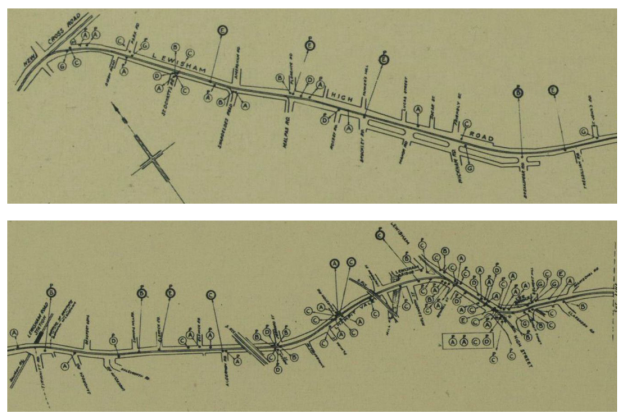 There were a 60 or so further to the east, with three deaths, all on a short stretch of Eltham Road (see below, 3).

The key to the maps show the seriousness of the accident, in terms of injury and the vehicle involved, presumably the vehicle causing the accident – although this isn’t clear.  Of the twenty one accidents causing serious injuries and deaths during the six months, there was a real mixture of vehicles involved bus (six), lorry (five), cycle (five), car (four) and motor cycle (two).  Around 1/3 of the 160 accidents involved pedestrians, and just over half those causing death or serious injury were involving pedestrians.

The Transport Minister asked the London and Home Counties Traffic Advisory Committee to ‘take immediate remedial measures to mitigate the dangers of these roads (4).’

While it is impossible to be absolutely sure about this, because definitions and recording have changed, it would seem that the road was more dangerous in 1934 than it currently is despite changes in traffic volumes.  2015 Transport for London (TfL) data suggests that there were six serious accidents on the same stretch of road, compared with the 21 in the first six months of 1934 (see notes 5 and 6 though). A House of Commons Library paper suggests that in 1938 there were 314 casualties for every 100 million kilometres travelled, while in 2012 there were 41 casualties per 100 million kilometres travelled – an almost 8 fold difference!

The context to the 1934 figures was the decision by the Ramsey McDonald led Government in 1930 to remove all car speed limits from 1 January 1931 – these had been limited to 20 mph from 1903, although had been hard to enforce.  The net result of the changes was a significant increase in road casualties – a new record was set in 1934 with 7,343 deaths and 231,603 injuries being recorded, with half of the casualties being pedestrians and three-quarters occurring in built-up areas.  To put this in some context, while definitions will have changed a little, the equivalent figures for the year to September 2015 were 1,780 and 188,830.

During 1934 a new Transport Minister was appointed, Leslie Hore-Belisha, who suffered a near miss as a pedestrian trying to cross Camden High Street. Hore-Belisha described the accident data as ‘mass murder.’  During his period in office, Hore-Belisha introduced of two innovations that eventually led to a drop in road accidents: the driving test and what was to become known as the Belisha beacon on pedestrian crossings (they didn’t get zebra stripes until much later); his period in office also saw a major overhaul of the Highway Code.

There was to be be no major initial impact of the changes though – road deaths continued to rise reaching 8,609 in 1940.

As for Lewisham’s 20 mph zone, it doesn’t apply to the A20, A21 or the A206 (the South Circular) – they are trunk roads and the responsibility of TfL.  It is an important step in the right direction, but Lewisham have to get the signage much clearer – there are still miles of roads without it being mentioned and contradictory signs on the edges of former, smaller 20 mph zones.  There then needs to be more resources going into education and policing for it to have a real impact – perhaps unlikely with still austerity minded central government squeezing local resources.

The image at top of post is illustrative rather than being of Lewisham – the source is here.