During recent months Running Past has celebrated the work of Lewisham’s suffragettes both individually – looking at May Billinghurst, Eugenia Bouvier, Caroline Townsend and Clara Lambert, and collectively in the first of a series of ‘Suffragette City’ posts in Lee and Hither Green, all being brought together on a Lewisham Suffragettes page

This post continues with this, looking at the repeated attacks on Lewisham Post Office, Sorting Office and neighbouring pillar boxes within Lewisham Town Centre by Lewisham’s militant suffragettes, presumably members of the Lewisham branch of the Women’s Social and Political Union (WSPU). 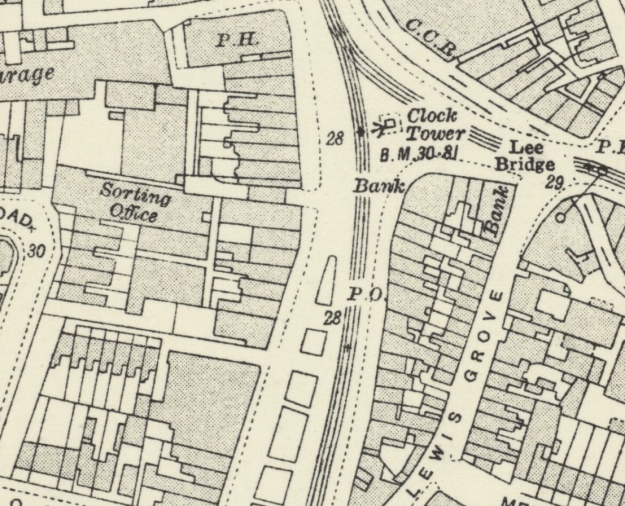 The main Post Office, marked PO above, was in roughly the same location as its last independent location, in Lewisham High Street within the market.  The sorting office was more or less opposite behind 108 Lewisham High Street – this is now land covered by the Lewisham Shopping Centre and would have been close to the current location of the residual Post Office within W H Smiths.

Oddly, the suffragettes weren’t the first to attack Lewisham Post Office; as Running Past has already covered, Rolla Richards, a Deptford Anarchist with mental health issues had attacked it in 1896 along with several other local Post Offices.

Before looking at the attacks, it is worth looking, briefly, at the history of and reasons given for damage to and destruction of property by militant suffragettes. The WSPU had believed in Direct Action almost from its formation in 1903 – Emmeline Pankhurst had disrupted a Liberal meeting in 1904.  The move to greater militancy and targeted damage to property seems to have been born out of a frustration with lack of progress, not just since 1903, but for a generation before. Despite a majority of MPs elected in 1906 supporting women’s suffrage Asquith (Liberal Prime Minister and opponent of women’s suffrage) contrived to ensure that Bills were never enacted.  This came to a head between 1911 and 1913 with levels of militant activity increasing dramatically.  There were also serious concerns about the extent to which the initial form of protest, demonstrations, were being met with considerable brutality by the police – notably Black Friday and events the following week in late 1910.

One of the first examples of a more direct approach was by a woman with a Greenwich link, Edith New, who smashed windows in Downing Street in 1908. This remained a rarity until 1911, but the following year 240 women were sent to prison for smashing windows, arson and pillar box ‘outrages.’

So why were the Post Office and pillar boxes targets? Presumably it was because they are obvious institutions of the state, resplendent with the mark of the monarch and would disproportionately impact on the wealthy, business and the Government. In practice, it was at least partially targeting those who were denying women the vote. One of the first recorded incidents was in 1911 when Emily Wilding Davison attacked three post boxes in late 1911 including one in Parliament Square. It started to be used on a larger, more coordinated scale in November 1912. 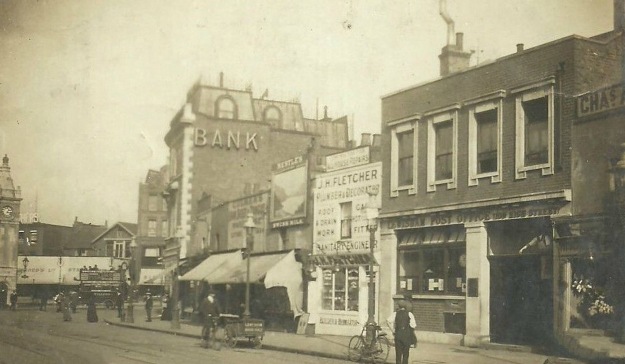 The post box at the main Lewisham Post Office (pictured above) was attacked on 17 December 1912, the same evening at several others in Lewisham, Lee, Hither Green and Blackheath – after the latter attack May Billinghurst and Grace Mitchell were arrested. A black, tar-like, substance was poured into the box, damaging letters (1).

There was to be another ‘pillar box outrage’ at the Lewisham Post Office on 3 May 1913 when a packet of partially burnt gunpowder was found, it had only ‘partially fired’ and around 30 letters were damaged (2).

In September 1913 there was a significant explosion and fire there, which ’caused some alarm.’ A loud bang was heard in the market and then (3)

a portion of the letter box fell into street and this was immediately followed by flames bursting from inside. The fire spread to other parts of the building which was quickly alight…..By the time the firemen arrived (from Lee Green and Ladywell) the flames had got a firm hold of a section of the premises and their efforts were directed at confining the fire to as limited an area as possible.

It took around 45 minutes to put the fire out although the local newspaper report suggested that there was relatively little damage to the building itself (4).

As the local press noted, by this stage it was obvious that the Post Office was ‘steadily becoming the objective of malicious suffragette activity in this neighbourhood.'(5). What was perhaps more surprising was that the attack in September 1913 was immediately after a public meeting in the market, which would probably have had a relatively high police presence and that no one seemed to have been watching what had become a clear target.

Less than a month later there was an almost repeat at around 7:00 pm on a Saturday evening in early October 1913 a loud explosion occurred at the Post Office and moments later flames were seen to be coming from the letter box. A large crowd gathered and while the flames were put out quickly hundreds of letters were damaged or destroyed (6).

Late in 1913 wax vesta matches and gunpowder were found in the post box at the Post Office, but they failed to explode.  The same evening there was also an attack on a pillar box in Lee High Road, that too failed to ignite as intended (7).

There was a further attack on Saturday April 18 1914 when phosphorous in an envelope and a cycle tyre containing a black liquid, wrapped in ‘The Suffragette’, was pushed through the letter box at Lewisham Post Office. The same evening an envelope containing sulphur was put in a post box at 160 Rushey Green (above). The damage on this occasion was quite limited.

As for the Lewisham Post Office while the attempts to destroy it, initially by Rolla Richards and then suffragettes, failed – it was very badly damaged in the V-1 attack on 28 July 1944 (it is on the right edge of the photograph above). It was initially rebuilt as a Post Office after the war although is now used for other retail purposes. 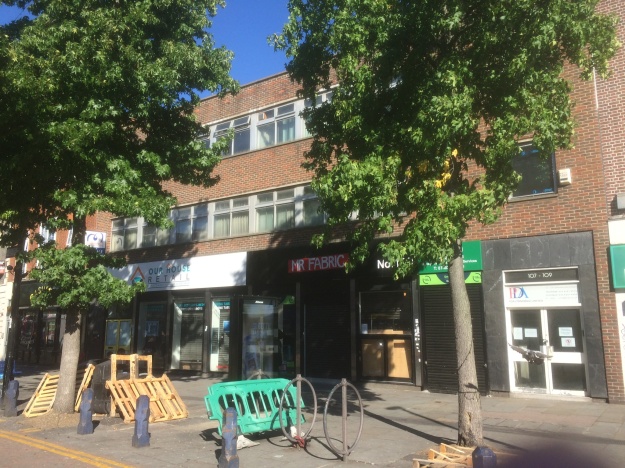 The picture of the Post Office is courtesy of Luke Anthony Briscoe on the excellent Catford and Lewisham Way Back When Facebook Group.

The picture on the pillar box in Catford is via Google Streetview.