This very well preserved ghost sign, next to the bowling alley on Belmont Hill in Lewisham was uncovered in early 2014, the previous advertising hoarding having been removed. Despite my expectation that it would be re-covered with a more modern advertising display, aimed at almost constant stream of drivers and bus passengers stopped at the traffic lights, it still there (mid 2017). 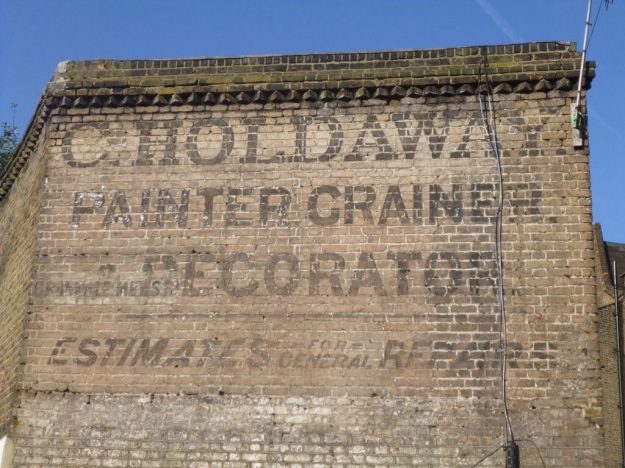 The C Holdaway was probably Charles Parneth Holdaway, although as it was almost certainly a family business, by the time the sign was written it may have been his son who was also Charles.

Graining was something common in the 19th and early 20th century – it was essentially either creating a wood grain effect on a non-wood surface or imitating hard, expensive woods by applying a thin layer of paint onto soft woods such as pine to mimic hardwoods such as mahogany.

The exact vintage of the sign is not completely clear, although it is certainly some time before 1912, as around halfway down on the left hand side there is an old street name, Granville Mews, painted over the advertisement. This name was replaced with its present name, Myron Place, in 1912.

Charles, senior, was born at Woodford in Essex in 1845. This predated the arrival of the railway there by a decade, so it is likely to have been largely rural in character. He had clearly moved away from the area by his early 20s, as he had married to Maria who was from Pimilco, and they had a son, Charles junior, was born in Brixton in 1868.

By the 1881 census they were living at 36 Molesworth Street, although given the birthplace and years of the other children, they had spent at least 5 years in Stratford en route from Brixton.

There was probably originally an address for the business on the sign, but this was undoubtedly lower down the wall and is now covered by several layers of paint. While this could have been Molesworth Street, it is much more likely to have been a little further up the road towards Blackheath at 27 Belmont Hill, where the family was living in 1891. Belmont Hill was the location given in the various adverts that appeared for the firm in the short-lived Blackheath Gazette in the early 1890s, a November 1892 edition included

Although as other editions had 0, 4 and 27, it may just have been typesetting of pre-computer Guardian levels of accuracy.

Charles, junior, was at least in the same ‘trade’, working at a ‘paper hanger’ in 1901, probably in the family business. He lived close by at 59 Cressingham Road. He is listed for the same trade in 1911, but three doors away from where he was living in 1881, at 30 Molesworth Street.