On the northern side of Eltham Road, just to the east of Lee Green, there is an elegant early 20th century building that is now part of the 1950s Borough of Woolwich (now Royal Greenwich) development of Ravens Way. The neighbouring council blocks were carefully designed to blend in with the former club, so it is easy to miss.  It started its life as a residential clubhouse for Ravensbourne Athletic Club and has an interesting story.

The early mentions of the club come from the 1870s, with the club seeming to have been formed around 1871.    But to understand the Club and its building on Eltham Road, we need to understand the origins.  It was the sports club for Cook, Son & Co. which had been formed in 1819 and was one of the largest English wholesale clothing traders and drapers of the late 19th century and early 20th century.  By the 1870s they were based in St Paul’s Church Yard in the City.  It’s head by this stage was Sir Francis Cook and by the end of the century he was one of the three richest men in the country; he had large estates in both Richmond and Sintra, just outside Lisbon in Portugal.

Cook, Son and Co. concentrated on warehousing and distribution rather than manufacturing the clothing themselves.  It sold directly to the small outfitters than still predominated the sector – this may have included the Campion family who had shops near Lee Green, on Lee High Road, Catford and Forest Hill, a ghost sign for whom is still visible in Catford (see below)  Cook, Son and Co. used the railway system for commercial traveller visits.

Ravensbourne Athletic was formed in 1871, taking its name from the location.  It is one I am sure readers will immediately recognise; their fields were described as being ‘truly rural’ and in the ‘picturesque vale of Ladywell’ (1).  It never seems to have appeared on Ordnance Survey maps, but was noted as being around 3 minutes from the station (2).  The 400 yard track at the edge of their cricket pitch was described as being at the bottom of the hill (3) so it may have been around the current locations of Chudleigh Road or perhaps Marsala Road – the latter was later home to the Edwardian professional marathon champion – Charlie Gardiner.

The 1878 sports day was referred to as their 8th Annual Meeting, it had a full range of track and field events – almost all were handicapped, which was common in the era (4) as we saw with the career of Harry Hutchens who ended up living at the other end of Ladywell Fields in Catford.  He wouldn’t have been welcome here though as he was a professional sprinter, probably the finest Victorian one.  Back to the Annual Meeting, while some races were internal affairs, some were open to local clubs such as Blackheath Harriers who were then based at the Green Man in Blackheath.  Current athletic inhabitants of Ladywell Fields, Kent AC, weren’t formed until a few years later. 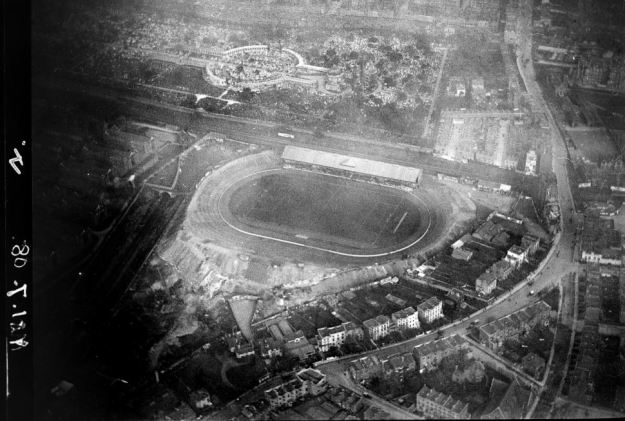 In 1883 the Annual Meeting had moved to the cinder track of Stamford Bridge (lpictured above in 1909 via Wikipedia Commons) and it was noticeable that reports seemed to be dominated by several Harriers clubs all of which are still in existence Ranlegh, Highgate and South London as well as Blackheath.  The numbers watching though were reported as being down, particularly women (5).

The reasons for the move to Stamford Bridge probably lay in the development potential of the land in Ladywell, London was expanding and as was seen with the short lived velodrome in Catford, it saw lots of suburban sports facilities disappear.  Press reports noted that the club had been ‘driven out’ of Ladywell; so it may be a short lease had come to an end (6).

The move to Stamford Bridge was a temporary one though, it seems that by 1884 they were in Lee, while the massive clubhouse was almost 30 years away, their Annual Meeting was to be held on what is now Weigall Road Playing Fields.  The ‘ground’ was described as ‘prettily situated’  and had a ‘very fair turf course.’ The Club had taken a 21 year lease out and the 1884 ‘Sports’ saw the usual fayre of Club and open races (7).

The location of their new base was field next to the Quaggy, it had been home to annual horse races 50 years before, but was to become a series of cricket and sports grounds.  It happened in a similar way around the Pool and Ravensbourne flood plains in Beckenham – as covered with the Oxo Sports Ground a while ago. Being on a flood plain, in wetter winters, fixtures will have no doubt been lost to waterlogged pitches – something that happened in the winter of 2019/20 too.

The annual sports were clearly a major social event for the company.  There were several photographs from the Illustrated Sporting and Dramatic News for 1896, including ones of the son of the owner, F W Cook, and Sir George Pragnall who was a senior Royal servant. More interesting, perhaps, are the race start photographs which show a little more of the area – particularly the children’s race which includes the rear of houses on Eltham Road (8). 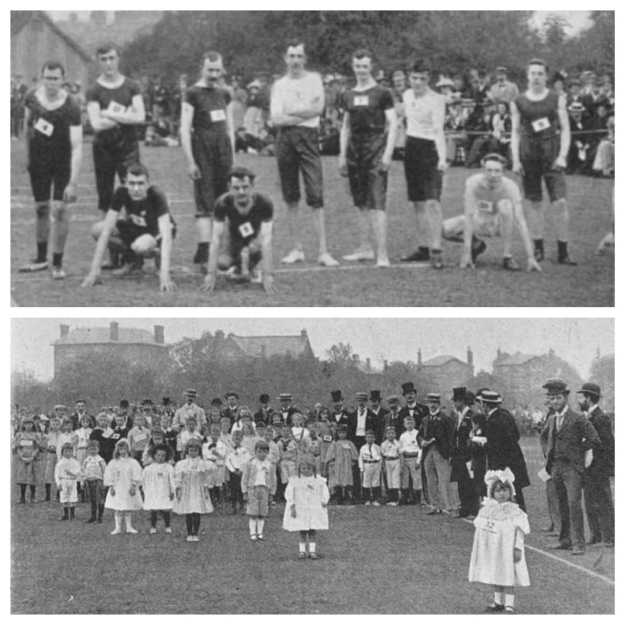 A couple of years earlier the Penny Illustrated Paper covered the event, which like many of the era included bicycle races – the ‘scratch’ race is shown in the photograph below – the start line was next to Weigall Road, with the pairs of gables of the houses clearly visible behind one of the pavilions and marquees (9).

While the Annual Sports brought out those in charge of the company, the rest of the year it was a busy club with dozens of activities going on including cricket, cycling, athletics, football, tennis, billiards, swimming, shooting and a library.  Teams and individuals representing Ravensbourne, nicknamed the Ravens, won a total of 135 championships in 1910 and it retained the Houston Challenge Trophy for Athletic preeminence in the City, which it had held  since 1894 (10).

It’s not clear why the club, which had 1,200 members, decided to both build a residential clubhouse and build such a large one with around 200 rooms, after all they had managed for 40 years without one.  The sports ground at the rear had three pavilions by 1893 but a gap on Eltham Road remained which was presumably owned or leased by the Club to provide access to the playing fields.  At some point around 1912 a decision was made to develop this gap into a clubhouse.  The the building work happened over the next two years  at a cost of around £20,000 which was donated by Sir Frederick Cook (11).

The newly constructed building was offered to the War Office at the end of July 1914 for use in the war (12) that had already started although Britain did not join until a few days later.  The offer was taken up and the building used for army billeting (13).

The block appears to have remained much the same as it was when it was built, certainly the exterior all looks original. However, a temporary structure may have been added at the back either around or during World War 2 when it also seems to have been requisitioned.

Back to the sport, the 1937 edition of the ‘Sports’ saw, perhaps, its most notable participant – the ‘Mighty Atom’, Sydney Wooderson, who comfortably won the  open mile scratch race in 4:20.6 (14). It was to be a summer of success for Wooderson, who took the mile World Record at the end of August in 4:06.6 at Motspur Park in south west London (15).

In the 1950s, the clubhouse and the houses around it were acquired by the Borough of Woolwich for council housing.  The rest of the homes were designed to merge in well with the former clubhouse which was converted into flats.  A new street was created behind, parallel to Lee High Road, which retains a subtle link to the Ravensbourne Athletic – using the club nickname, ‘Ravens’ in  Ravens Way, the former clubhouse is 130-184. The playing fields were opened up to the public, accessed from Weigall Road.

As for Cook, Son & Co., it merged with a not dissimilar firm, S & J Watts & Co, who were based in Manchester, in 1960 to form Cook & Watts.  The life of the new company was a very short one though as like many in the textile and clothing sector it was taken over by Courtaulds later in 1960.

And finally, at the front of the building is a delightful, small obelisk.  It’s history seems lost but, it bears the words ‘The shadows will lie behind you if you walk towards the light’ carved into the four faces of the obelisk.  The phrase and several variants have been attributed to a wide range of sources including Walt Whitman, another person called Whitman, along with the Victorian poet Charles Swain and a Maori proverb.  However, there  is nothing obvious to link to either the Club or its corporate owners. 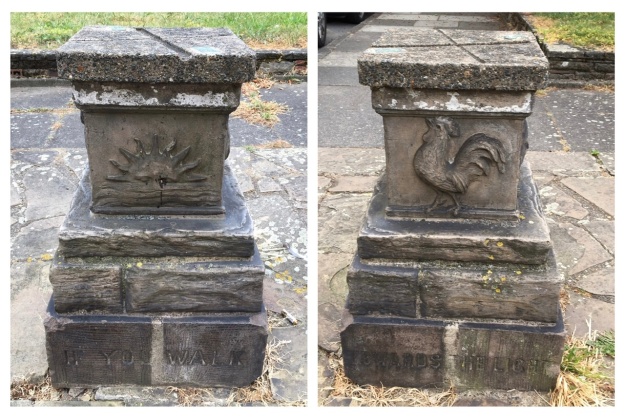