Running Past has traced the routes of several of the small tributaries of the River Pool that emanated from the higher ground of the Great North Wood from Sydenham to South Norwood Hill – Adams’ Rill, Wells Park Stream, Pissarro’s Stream, Porcupine Stream, Penge Stream and the River Willmore.  A little further down the hill are a pair of streams that run through the wild urban oasis of South Norwood Country Park and have a confluence within it.  The Park is not to be confused with South Norwood Lake and Grounds, which we passed through with the River Willmore.  Collectively the streams appear to have been named, albeit not obviously on maps, South Norwood Stream – which seems appropriate based on its location.  Unlike all the other streams followed to date in the catchment it is visible for much of its route.

As there are two main flows, which need to be distinguished and as a there is already ‘South’ in the name these can’t be based on compass points – North South Norwood Stream would be far too confusing!  The northern flow is along the edge of the Beckenham Cemetery, two of the more famous names of buried there are Thomas Crapper (of flush fame) and W. G. Grace, who Running Past covered on the centenary of his death in 2015.  Whilst tempted to use the former, particularly as the South Norwood Country Park was once Croydon’s Sewage works (more on that later), it is a flow that deserves a better epithet – so it will be referred to as Grace’s Brook.

The southern branch is close to Elmer’s End so this seems rather appropriate to call it Elmer’s Brook.  However, the two competing narratives for the derivations of the name  are fairly grizzly, in both the ‘End’ relates to a brutal death – either for a ‘famous highwayman’ being hanged or more likely it came from  the Anglo Saxon word for criminal, Elmerus, and related to local people being executed on the Green.  Although with the latter, nothing was found on-line to back this up other than other references to Elmers End and delving further into the name it seems as likely that it is a variant of a German name Hildimar – meaning famous fighter.   Those of you wanting a more benign option and who have had small children in the recent past, may well be aware of an Elmer whose demise has yet to be reported, an elephant with a brightly coloured coat – although that appears to have been commemorated (although not in name) by the Glass Mill Leisure Centre further downstream in Lewisham.

The sources, and there are two of them, are close to that for one of the branches of the Willmore which was at Goat Bridge.   Fluvial flows are indicated on maps with upward pointing notches in contour lines caused by the stream eroding the ground as it flows.  For the northerly source, the highest of these is around John Street, although the land rises above that and there was a small pond on the Victorian Ordnance Survey map (see top left hand corner below – on a non-commercial licence from National Library of Scotland) which was around 50 metres along Manor Road from Portland Road which may have been the source.

There is a fine Victorian building now on the site with a car park on the at the rear, but no 21st century sign of water.

The subsequent route takes the Brook along Harrington Road, there were still no obvious subterranean sounds of flowing water emanating from beneath manhole covers.  The Brook emerges out into the open near the eponymous Croydon Tramlink stop on the edge of South Norwood Country Park.  Sounds of water were heard sooner than any physical sign in the impenetrable bramble and nettle strewn undergrowth.

The Environment Agency Flood Risk maps (where surface water is selected) show the route quite clearly. 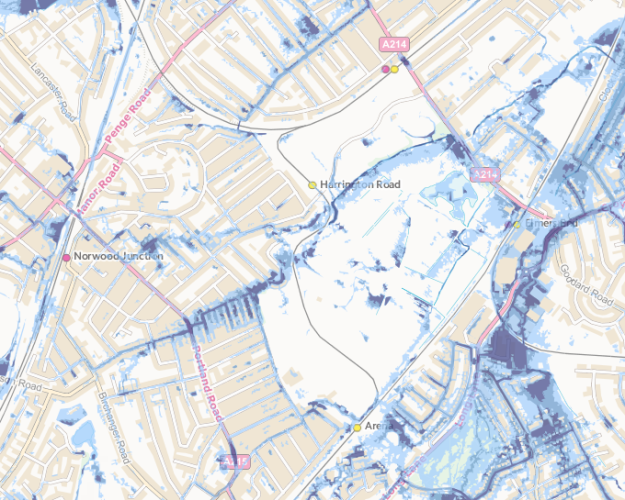 The southerly of the sources has contour lines which peter out at Merton Road close to the large railway cutting, which broadly followed the route laid out by its predecessor the Croydon Canal, again, nothing was obvious on the ground.  It may well be that this is or was the source.  While difficult to be certain the route probably follows Crowther and Holland Roads – there is a pronounced valley at this point on Portland Road.

A little way up the northern side of the valley was the home of William Walker at 119 Portland Road; Walker was a diver who used his underwater skills to help shore up and underpin serious subsidence at Winchester Cathedral during 1906, without which the Cathedral may well have collapsed.  Born in 1869, he trained with the Royal Navy at Portsmouth Dockyard, and amongst other projects he had worked included the Blackwell Tunnel.  He died during the ‘flu epidemic of 1918 and was buried just downstream in at Beckenham.  There is an impressive plaque on the front of the house.

The valley continued along Belfast Road, albeit with no obvious watery sounds from beneath the ironwork in the road.  Ground levels and contours suggest that the Brook would probably flowed just to the north of the brickworks which were where the Croydon Arena is currently situated; they will have utilised the heavy clays  of the area.  It was an area where there were several brickworks – evidence of which remains in Brickworks Meadow in Woodside and Heavers Meadow in South Norwood.  Unlike several of the other works in the area, the marked (on Ordnance Survey map above) Portland Road Brickworks appears not to have been mentioned in on-line.  The same is the case for the South Norwood Potteries – although there is a small cul de sac, Pottery Close, which is near the confluence with the northern branch. 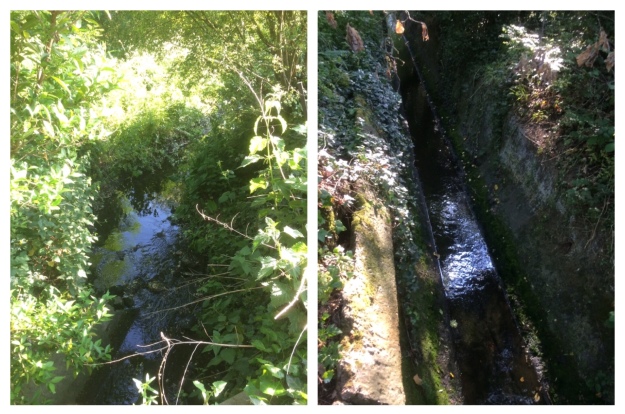 The newly merged Grace’s Brook skirts the northern edge of South Norwood Country Park initially with natural banks but soon in an old concrete channel, there is little in the way of obvious life although a few plants seem to be inhabiting cracks in the concrete banks.  The path alongside was barely visible and painful to follow in places due to nettles and the benign cow parsley. Despite the volume of urtica dioica and a marked absence of rumex leaves to salve the resultant rash, the Park was a delight – an area of wilderness criss-crossed by paths and with a small lake at the Elmers End Road side.

It wasn’t always thus, for a century from 1862, the land was used as a sewage farm with lagoons filtering out the sediment – it wasn’t that successful given the clay subsoil – some of the concrete channels used apparently still remain though, although were never seen due to the height of the foliage .  The area was used for training for armed forces during World War 2 and also abandoned and largely left to go wild until the creation of the Country Park. Elsewhere in the park there was dumping of rubble from the Blitz in Croydon which now provides a fine vantage point for the rest of the Park.

Unlike Grace’s Brook, the source is a little indeterminate – contours seem to imply a source on the edge of Long Lane Wood (although this was never found); it then follows a footpath on the opposite side of Long Lane – historically there were flows alongside but there is nothing now either side of the border with a driving range.   While modern Ordnance Survey maps offer an intermittent blue line alongside the west of the Tram Link tracks it was several hundred metres before anything definitive was found.

A secondary source appears to be to the south west of the Croydon Arena, although contour lines and on ground investigation proved inconclusive as to where this might have been.  As with Grace’s Brook while sounds of water were heard at various points the depth and density of the undergrowth proved a barrier to finding the flow.

While there is nothing now obvious on the ground, at this point it would have fed two concentric rectangular moats surrounding a 13th century house, the house was probably abandoned due to flooding  by the mid-15th century.   The site was excavated in the 1970s before the Country Park was created, with significant and interesting finds of timbers, pipes and pottery along with the moats.  It was marked on the 19th century Ordnance Survey map – see above. 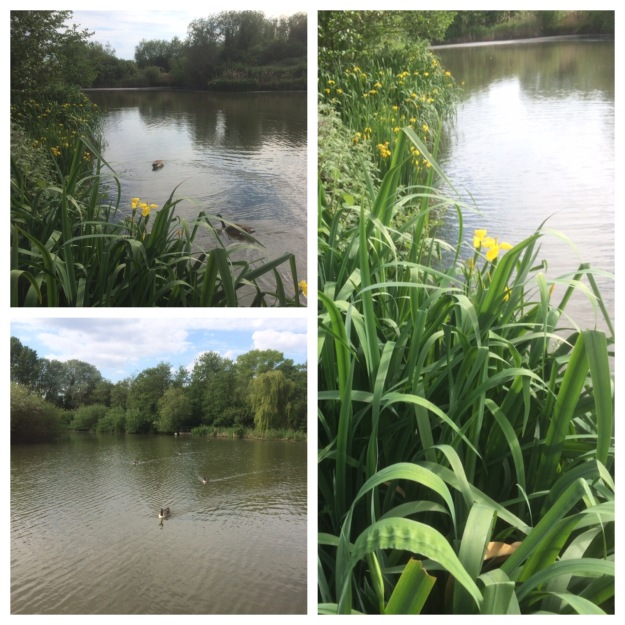 Another man-made water feature was created when the Country Park was created – a small lake.  Elmer’s Brook skirts around the edge of it before a confluence (which may be a recent man-made one) with Grace’s Brook. The volume of water from Elmer’s Brook appears less at this point than further up-stream, it is suspected that much of the flow is now going into the lake although no obvious evidence of this was found.

What is now South Norwood Stream darts under Elmers End Road flowing through Dorset Road allotments opening out onto the flank of Maberley Road playing fields (a different Maberley Road to the one covered in the post on the River Willmore).  The banks here are naturalised (see photographs at the top of the post) and while in parkland, the streamside path is choked with plants.  It then passes through passing through a Bromley Recycling facility before doglegging along the edge of Churchfields Recreation Ground, again with concrete banks and continues under the railway between Elmers End and Clock House.

For the fluvial flâneur there is a mile long retracing of steps through parks and along footpaths through Elmer’s End before seeing South Norwood Stream again as it crossed Clock House Road, the stream having dawdled just 75 metres in its now concrete channel.  It is bridged by the road and in the gardens between Clock House and Forster Roads a confluence with Chaffinch Brook is made unseen due to a large buddleia bush blocking the view.

It has happened twice this week, the second time was the ghost sign I saw just off South Norwood High Street yesterday afternoon. The sign had seen much better days, the paint had flaked off but the flourishes of the font seemed familiar. It took me to run past the same sign on on current shop front today to realise that this was a sign for Boots the Chemist.

The first was wondering why I had struggled for a couple of weeks with both the closing miles of my long runs and the next run I did – it was amazing the difference a bottle of Lucozade Sport, mid run had this week …