Running Past has been following the courses of the small tributaries of the River Pool, initially those that emanated from the higher ground of the Great North Wood from Sydenham to South Norwood Hill – Adams’ Rill, Wells Park Stream, Pissarro’s Stream, Porcupine Stream, Penge Stream, the River Wilmore and South Northwood Stream. Sandwiched between the main constituent flows of the Pool, the Beck and Chaffinch Brook, is the smaller St James’ Stream.

It is named after a church close to its confluence with Chaffinch Brook, unsurprisingly called St James, we will return to that when we get that far downstream as a stream needs to be followed from its source. Like its near neighbour, South Norwood Stream, there are two branches of the Stream.  It is shown to the eastern side of the Environment Agency flood risk map.

The source is in high ground of Spring Park, an area that seems to be so called due to water sources rather than having any seasonal references. It wasn’t always referred to as this – up until the early 19th century it was referred to as Cold Harbour, presumably this had a similar derivation to the similarly named area of Mottingham  – col d’arbre (gap between wooded hills or pass).

As streams flow they create small valleys, which translate into notched contour lines on maps; the highest of these notches is in a pleasant grassed area bordered by Temple Avenue, Lime Tree Grove, Greenway Gardens and South Way. In reality, the source was possibly a little further south, probably in the woodland behind the houses on Greenway Gardens – more on that when we turn to the Western Branch, although no evidence of present day fluvial activity from the eastern Branch was found there. 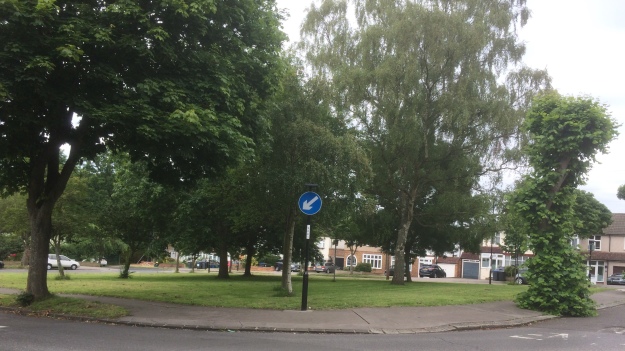 The course would have taken the nascent stream in a north-easterly direction, probably through the small piece of woodland, Temple Copse, which seems well maintained by the Spring Park Residents Association. A circuit of the wood offered no clues to the course of the stream. There were hints of, presumably, past fluvial activity around the junction of Pleasant Grove and Shirley Way with a small valley, smoothed a little by the inter-war suburban roads. The stream first appears on the ground in a small, pleasant park centred around a pond, which it takes its names from – Miller’s Pond which was a water feature for the large house and sometime farm – Spring Park House. It was bought in the mid-1830s by wealthy MP, Sir John Temple Leader, who brought in an innovative tenant farmer, Hewitt Davis who converted the land into a ‘model farm.’ Census records suggest that Davis had moved and the 275 acres were being farmed by John Callis by 1851.

By 1861 the house was a residence for a stockbroker, Horace Wilkinson, his wife Anne, two toddlers and seven servants. The farm seems to have been being run from elsewhere. This was the pattern with successive censuses. By the 1950s the notice board at the Pond suggests that the House was being used as a nurses home for the nearby Bethlem Hospital. 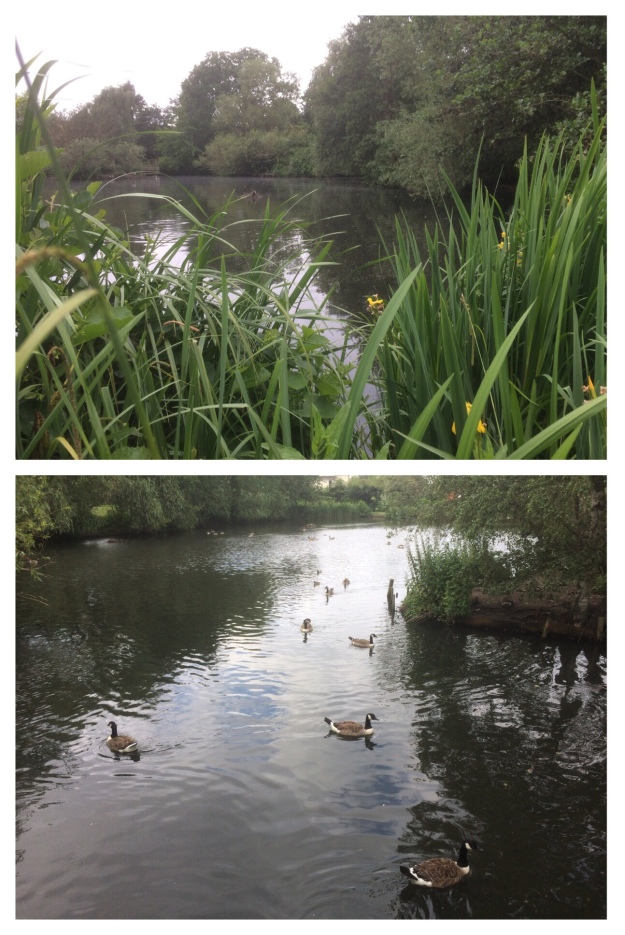 The pond was named after the last tenant, Thomas Alfred Miller, who was certainly there in 1911 and hailed from Essex. The second pond remains but seems not to be publicly accessible.

Over Wickham Road, and into the grounds of the Bethlem and Maudsley Hospital, there is a pond marked on modern road maps, but on the ground it proved hard to find – there was a jumble of brambles, nettles and other dense undergrowth whet GPS suggested it should be. There were though a series of manhole covers broadly in the directions of flow dotted between the newer buildings of the Hospital, but alas after several weeks of little rain even hints of the sound of subterranean water proved elusive.

The original source would probably have been in pleasant triangle of woodland flanked by Shirley Church Road, South Way and Greenway Gardens. At the first reconnoitre, the copse seemed to contain several valleys, but it became clear that they were pits, an early Ordnance Survey map suggesting that there had been gravel extraction there. The quarrying expunged any evidence of fluvial activity.

The course of the western branch is broadly northern while the notched Ordnance Survey contour lines are clear, the evidence on the ground is much less so; although the fluvially eroded dip on Midholm Road is very clear indeed. There is also a slight depression on Bennett Park before, unseen and unheard, the Stream follows for a while one of many paths behind homes in the area – a continuation of Farm Drive. The contour suggested route would take the Branch across Devonshire Way, Lake Road and finally Wickham Road. Evidence of erosion and fluvial flows was conspicuous by its absence though on the ground. 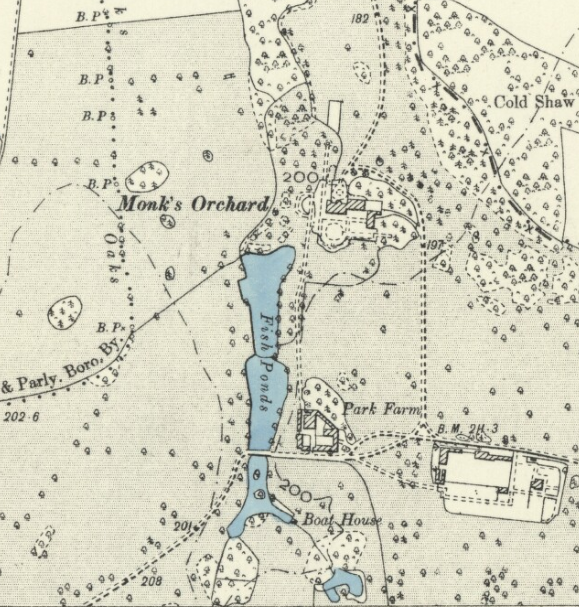 Over the road and into the grounds of the Royal Bethlem Hospital, a stream eroded dip becomes obvious. Before the Hospital was there, the land was home to Park Farm, the confluence with the western stream was made towards the south western corner of the estate. The newly joined Stream was dammed several times to form a series of ponds for breeding fish. The area is obvious but has incredibly dense trees and undergrowth, with the former ponds completely silted up with no current sign of water, there are suggestions that they may have been filled in during the 1940s to prevent patients harming themselves.  There are semi paths to a small depression which would have been the course, but while modern road maps suggest flowing water, on the ground it appeared that the stream had been culverted, the nearest to water was an oddly abandoned empty fish bowl. 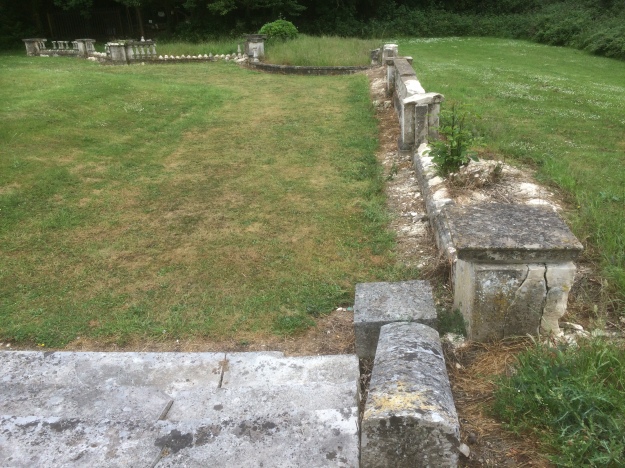 The hospital was on the site on Monk’s Orchard House which was pulled down to make way for the Hospital.  The name is not directly monastic but refers to a family called Munke from the Addington area whose named lived on in some nearby woodland.  The name was appropriated by Lewis Loyd when he built the House and it has in turn given its name to the suburb and adjacent road.  The remains of terraces of Monks Orchard House remain in the Maudsley grounds.

When the Stream finally emerged from its culverting, the water seemed to be barely moving, almost stagnant. The small valley remained visible from the adjacent meadows – resplendent in late spring wild flowers when visited. By the next time the Stream was visible, it seemed to have been joined by several other flows from elsewhere on the Hospital estate. 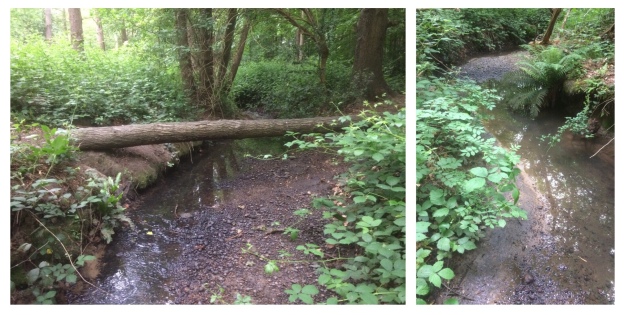 The dense undergrowth and volume of nettles and brambles made much further exploration for the be-shorted runner tricky (the wounds from the same combination of plants from the exploration of South Norwood Stream had barely healed.)

The Bethlem Royal Hospital, now part of the South London and Maudsley NHS Trust, is a psychiatric hospital whose roots were in the 13th century in Bishopsgate, close to the current location of Liverpool Street Station, from the 14th century it was sometimes referred to as ‘Bedlam.’ It was based at what is now the Imperial War Museum from 1815 until moving to Monks Orchard in the 1930s. Bronze Age relics were found during the construction.  In July 1948, following the setting up of the National Health Service, Bethlem was united administratively with the Maudsley Hospital to form a single postgraduate psychiatric teaching hospital. 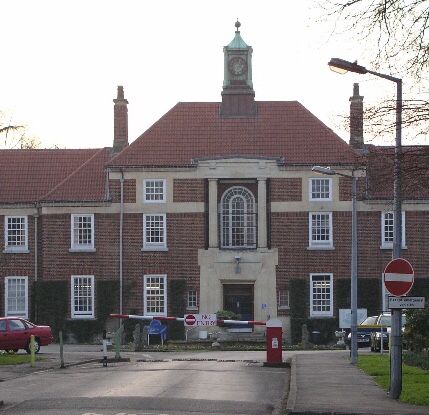 The next sighting of the stream was just 400 metres away as the Stream flowed, but the hospital site has no non-fluvial exit to anywhere other than Monks Orchard Road. A detour of around a mile and a half is needed for the fluvial flâneur, the follower of streams.

It is easy to miss St James’ Stream’s next brief public appearance – a fleeting glimpse on the southern side of Upper Elmers End Road, a small screen with a river level gauge. Beyond the screen, the land is flat and notched contour lines which would indicate fluvial erosion few and far between. The stream presumably takes a culverted course under a David Lloyd Leisure Centre, Beckenham Rugby Club and Eden Park High School. The signs and sounds of water around the likely course behind gardens of Dunbar Avenue were absent though. 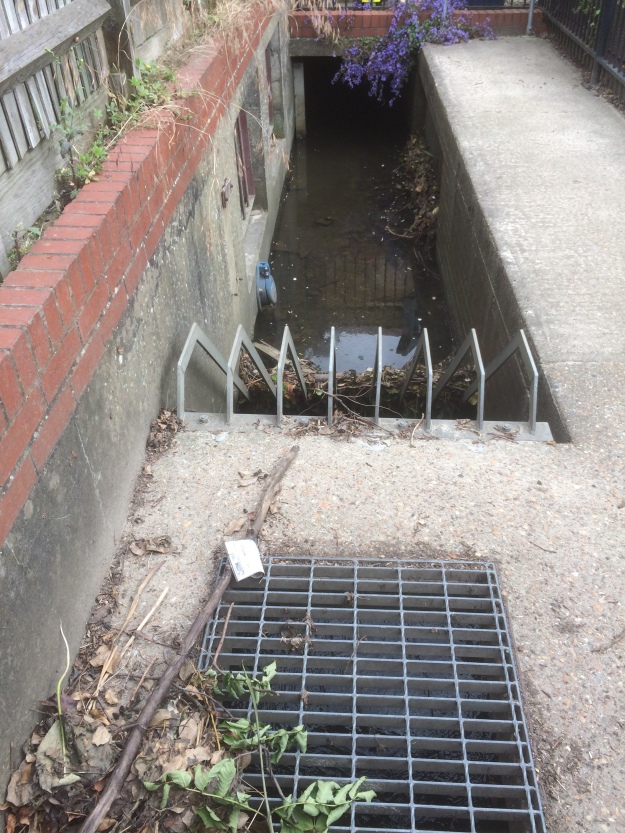 The next and penultimate appearance is beyond the Elmer’s End one-way system around the green where one of the suggested derivations of the name is that this was the place where local Anglo Saxon miscreants were executed. The re-emergence of the stream is close to the church it takes its name from – St James, Beckenham. 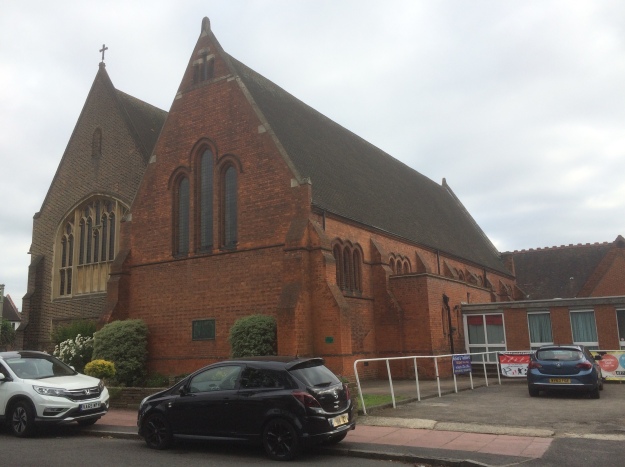 The original church, of 1879-88 by A R Stenning, is hidden by the pretty Perpendicular building of 1934 by G Sworder Powell which doubled its size. Symmetrical south elevation to the road, with two wide gables and low flanking porches on the slant. Arcade of exceeding wide four-centred arches.

The St James Stream appears 50 metres to the north east of the eponymous Church on the eponymous Avenue in a concrete channel, seemingly devoid of any life, other than that forcing its way betwixt fencing panel and concrete banks (the photograph to the left below). 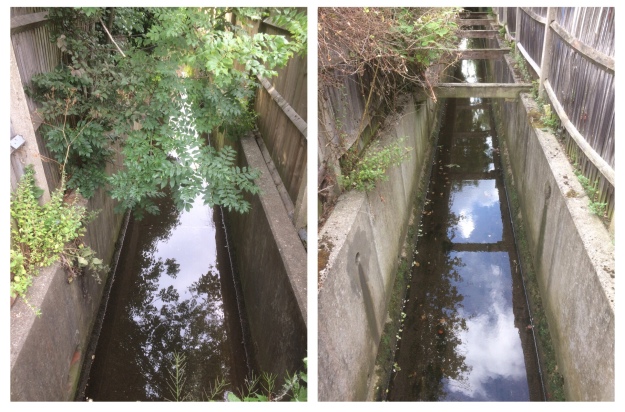 The Stream’s last few metres continue in the broadly north western course it has been following for a while, bisecting Forster Road (above right) before a confluence of the stream with Chaffinch Brook which is flowing between Forster and Clock House Roads, around 250 metres before the waters of another tributary, South Norwood Stream join.   The confluence is hidden from the public eye as it remains covered until reaching the rear gardens of the eastern side of Forster Road.

Census and related data come via Find My Past

The Ordnance Survey maps are on a non-commercial licence from the National Library of Scotland, Spring Park House  and Monks Orchard (both 1897)