In 19th century London the four spectres of old age, accident, sickness and unemployment haunted the poor, for it led, almost inevitably, to applications for the Poor Law, and in many areas this meant the workhouse. While many have disappeared under bulldozers, often to make way for new hospitals a few of the old buildings remain.

There are two within a few hundred metres at opposite sides of Ladywell Fields on my regular runs along Waterlink Way. The Poor Law Unions that ran them were Lewisham and Bermondsey (St Olave) were unusual in that they provided mainly ‘outdoor’ relief – money, food, clothing or goods, given to alleviate poverty without the requirement that the recipient enter an institution.

On the western side of the Ravensbourne are the remains of the workhouse infirmary of the St Olave’s (Bermondsey) Union Board of Guardians.

Opened in 1900 it had 812 beds for the elderly poor and infirm. It was later to have a variety of uses – a WW1 military hospital and what seems to have been a quite large scale children’s home.

Much of the site has been cleared for housing, but the gatehouse, admin blocks (which are used by Lewisham Council) and magnificent water tower all remain.

Work may at last be starting on redeveloping the old Catford Greyhound Stadium, there was certainly some activity on the fringes of the site this morning. I pass a couple of times most weeks on my regular runs alongside the Ravensbourne through Ladywell Fields towards the Pool and Waterlink Way. The rivers are about as full as I have ever seen them in 15 years running along the route.

The stadium had its first meeting on 30 July 1932 with perhaps the most famous greyhound of all, Mick the Miller, being paraded around the track. It enjoyed three decades of success but its death knell, along with that for many other greyhound tracks, came in 1961 with the legalisation of betting shops. The decline was slow but the stadium finally closed its doors in 2003.

While there was some talk of listing parts of it, the stadium was partly destroyed by fire in 2005 and subsequently demolished. All that remains is the large metal sign and turnstiles and a vague outline of where the track once was. 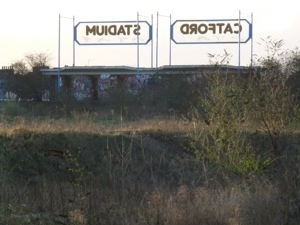 Barratt homes are meant to be developing 589 homes plus a community centre and a few shops near the stations starting this year with the final home going up in 2017. There were plans to start work but the post 2008 economic downturn seems to have put plans on hold.

The other aspect of the racing that has disappeared from the area are the greyhounds – whilst the stadium was open there were always a few dogs owned by local people or taken on as pets when their bibs were hung up; they were a common sight in Ladywell Fields – but one spied on Waterlink Way between Christmas and New Year was the first I have seen for ages.