48 Farley Road is an ordinary looking Victorian terraced house in Catford; it has a brief, but important, place in British cinematographic history – in the early 20th century it was the birthplace in 1902 and home to Elsa Lanchester, who was to become the Bride of Frankenstein (Picture on Creative Commons via James Vaughan on Flickr)

Her parents were Edith (“Biddy”) Lanchester and James (“Shamus”) Sullivan; to suggest that their lifestyle was ‘different’ would be something of an understatement.  They were members of the Social Democratic Federation and challenged late Victorian and Edwardian mores in relation to marriage by living together outside marriage.  After telling her family that she was going to move in with Shamus, her family had her sectioned for several days. Biddy later became secretary to Eleanor Marx, a role she retained until Marx’s death.  She stayed with Marx in Sydenham after the birth of her first child, Waldo Lanchester who was to become a famous puppeteer.

In Elsa Lanchester’s autobiography there is, sadly, little reference to the Lewisham life of one of ‘Hollywood’s most delightful comediennes and the wife of one of its greatest, and most tortured, actors’ (Charles Laughton) (1). The family moved frequently around South London, in addition to Catford (see picture below), there were short-lived homes in Lewisham, Clapham and Norwood before settling in Battersea.  Part of the reason for these frequent movements was to try to prevent Elsa being vaccinated as her brother Waldo had reacted badly to his and Edith wanted to prevent government interference in the life of Elsa (2). 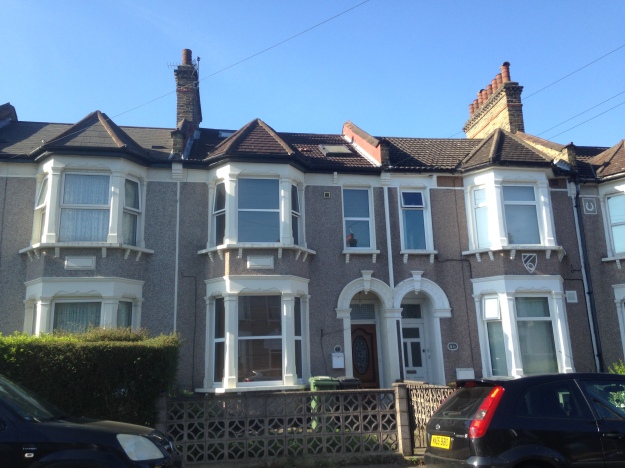 This fear of authority extended to what was recorded in the census – in 1901, at Farley Road,  Biddy was recorded as a visitor and Waldo her son.  Similarly in the 1911 census night Edith, Elsa and Waldo camped in Surrey woodland away from their then Clapham home to avoid being included in the returns (3). Oddly James still mentioned all but Edith to the enumerators.

The various family homes often had socialist visitors  who Elsa refers to as ‘kitchen comrades’ – this included the Pankhursts and there were regular trips to Women’s Social and Political Union rallies, one of which Biddy was arrested on (4). There were childhood memories of May Day rallies, sherbet fountains and singing the Internationale and the Lewisham written Red Flag (5).

There were trips to both the ballet, to see Pavola’s Swan Lake as well as seeing the likes of George Robey, Marie Lloyd at Clapham Grand (6).  Elsa went to classes in weaving, spinning and sandal making with Raymond Duncan (brother of Isadora) in Clapham (7).  Through him she ended up at Isadora Duncan’s dance school in Paris although there seemed to be little real talent for teaching from Duncan so little was learned other than to ‘become an autumn leaf’ (8).

After returning from Paris as war broke out, Elsa began to make a living out of short-lived dancing assignments, including a week as a snake dancer in Edmonton (9). After the war ended she worked for a charity teaching dancing called Happy Evenings, during her second summer of this she set up a school in Charlotte Street in central London (10).  She also used the premises to set up what was effectively an after-hours theatre club – the Cave of Harmony – which began to attract a famous clientele which included the likes of H.G. Wells, Aldous Huxley and Evelyn Waugh who became a regular visitor(11). As she was with many friends and acquaintances, Lanchester was quite cutting about Waugh – describing him as ‘not at all attractive looking….pink in patches as though he had a bad cold.’ (12) The Cave of Harmony didn’t provide enough income to fully support her, so Elsa took a range of other jobs to make ends meet including cleaning (13)  and acting as a ‘correspondent’ for couples that couldn’t get an ‘honest’ divorce (14).

She began to get parts in plays as a result of the Cave of Harmony contacts, including several through Nigel Playfair, then manager of the Lyric Hammersmith. By the time she met Charles Laughton in 1927 (pictured together left – source), she had become moderately well-established on the London stage; he was still making his way – they married in 1929. They appeared together several times on the stage, notably in ‘Payment Deferred’ – an adaptation of a novel by sometime Lewisham based CS Forester (covered a while ago in Running Past) (15).

There was an incident during the run, where police arrived at the door with a ‘boy’ who was trying to get money out of Laughton who then confessed to Elsa about his homosexuality – Elsa’s response of ‘It’s perfectly alright ,it doesn’t matter…’ The latter remark seems to have upset Laughton greatly (16).  Laughton played William Marble and Elsa his daughter in Payment Deferred, the play lasted for 3 months in the West End (17) before transferring to Broadway and then Chicago for short runs with both of them appearing.

It was the critically acclaimed performance by Laughton in Payment Deferred that was to mark the beginning of his film career – he was to keep the role in the film version of the play and had several other parts in Hollywood films. Elsa though was overlooked for the daughter – the studio wanting the more bankable, in box office terms, Maureen O’Sullivan (18).

Her own movie debut was to come in a film that her husband starred in, playing Anne of Cleves in the Private Life of Henry VIII in 1933 (Picture on a Creative Commons via Wikipedia).

Her breakthrough was two years later as the Bride of Frankenstein.  Oddly, her autobiography, ‘Elsa Lanchester – Herself’ spends little time on the film; she includes no photographs, and the four pages of narrative is little more than a description of the time spent in makeup creating both her hair and the bandages that were wrapped around her.  She did note some of the reviews though, including this one from the subsequent ‘An Illustrated History of the Horror Film’ (19)

Elsa Lanchester in her white shroud and Nerifertiti hairdo is a truly fantastic apparition  …. a delicate suggestion of both the wedding bed and the grave

The film had good reviews on release and, unlike many of the era, has stood the test of time; at the time of writing in 2017 it had a 100% Rotten Tomatoes rating. It did well at the box office too – by 1943 it had made a profit of $2 million. (Picture below on a creative commons via Wikipedia)

Lanchester had a successful career after the Bride of Frankenstein, although you’d be hard pressed to work this out from her autobiography; her own accomplishments only seem worth mentioning in passing, whereas the trials and tribulations of Laughton’s various roles and his angst in preparing for them, as he became one of Hollywood’s ‘leading men,’ are dealt with in great detail.  While Elsa, was only once the ‘leading lady,’ in Passport to Destiny, she had a good career as a supporting actress – winning a Golden Globe for Agatha Christie’s ‘Witness for the Prosecution’, along with and Oscar nomination for the same film and another Oscar nomination for ‘Come to the Stable’.

She also found success returning to her roots at the Turnabout Theatre off Sunset Boulevard.  The theatre was a bizarre mixture of a puppetry stage at one end of the theatre and one for actors at the other end with reversible seats. Lanchester performed a similar solo vaudeville act to the one she had done in the past at the Cave of Harmonies at the Turnabout Theatre (20).

She had a number of early television presenting roles in the USA, including hosting ‘Words about Music’ on US TV every Saturday night for a year in the late 1950s .  Elsa played various small parts in American TV shows including ‘Burkes’s Law’ pictured below in 1964 (On a Creative Commons via Wikipedia)

She toured an autobiographical one woman show –‘Elsa Lanchester – Herself’ which Laughton had directed. He was to die of cancer in late 1961 but Lanchester continued to work into her late 70s, her final film was in 1980.  She published her autobiography in 1983 but suffered from a stroke soon after and passed away in late 1986 aged 84.

But it is as The Bride of Frankenstein that she is best remembered – hopefully, one day this might include a plaque at 48 Farley Road.