Lee is now was very different to how it was in the past, that doesn’t make it that dissimilar to any other place in the country. What is really different is that it has moved. What is now regarded as Lee, the area around the station, and Burnt Ash Road/Hill is a mile away from its historic centres – Lee was previously three small settlements – on Belmont Hill, around Old Road and around Lee Green. Old Lee was a place for the rich, with some of the wealth having its origins in the slave trade and Deptford. There were several very large houses stretching from The Cedars on Belmont Hill in the north to the Manor House in the south – over time I will probably touch on all of them, but I will start with one that is no longer there – Lee Place.

There is a logic to this in that its disappearance helped shape the current development of the area in that it allowed the straightening of Lee High Road. There had been a large medieval moated farm, latterly known as Annesley’s House, located some distance away, to the north of the High Road – roughly where St Margaret’s Lee CoE School is now. This estate was fragmented in the early 17th century following the death of Brian Annesley. The end of his life, and his at least partial inspiration for King Lear, was covered a few months ago in the blog.

This fragmentation of the old estate seemed to allow the development of a series of slightly smaller merchant’s houses in the area. Lee Place was one of the first of this new generation of houses and was built in the early 17th century. It was located just to the rear of the western side of the current Bankwell Road (named after Lords of the Manor of Lee in 13th and 14th Centuries). Its grounds included an area largely bounded by the current Old Road, which then formed the main road from Eltham westwards towards London but included an area to the north of it as well. There was a partial moat, probably originally Annersley’s, and small lake just north of the current Lee High Road, behind the petrol station and Rambles bar. There will be another post on this in the New Year.

(Picture from information board opposite St Margaret’s Lee)

Relatively early in its history it was home to Christopher Boone, a wool merchant in London. His name lives on with the estate chapel that bears his name and was a mausoleum which was built in 1683 – more that sometime in the future. The main entrance to the estate was adjacent to the recently refurbished Boone’s chapel. 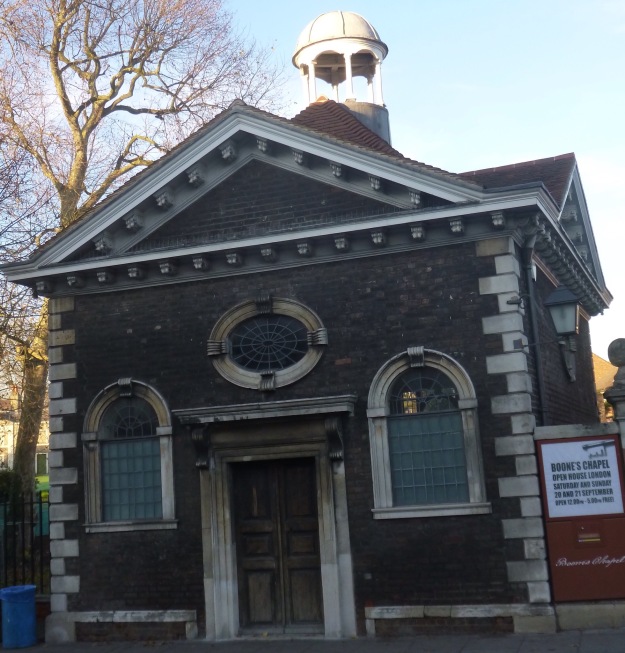 Other than Boone’s Chapel, the remaining sign of Lee Place is part of its boundary wall facing onto Old Road, it was the external wall for a now unused council depot, while old, it isn’t brickwork of any great beauty. 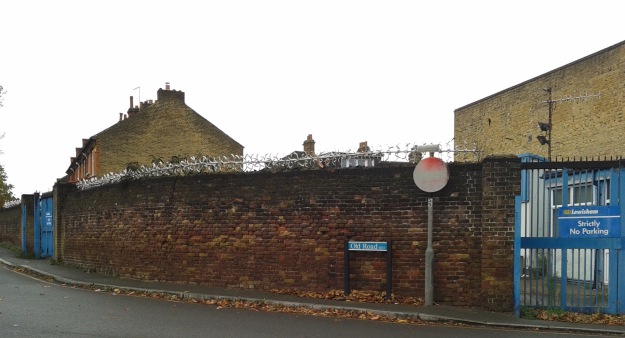 Lee Place almost certainly not built by the Boones, the 1664 Hearth Tax listed it as being owned by George Thomson and having the most chimneys in the parish – 21.  He seems likely to have been the brother of Maurice Thomson – who lived nearby and was heavily involved in slavery, Running Past will return to him in the future.  Assuming it is the same family, George Thomson had been a member of the Long Parliament and was also heavily involved with slavery.

The Boone family lived in the Place for most of its life, after Christopher’s death the house was inherited by his son Thomas. It then passed to Thomas’ daughter in 1749 to live in until her death when it passed to Thomas’ nephew, Charles Boone. Around this period, the house was let to Thomas Lucas who went on to build The Manor House – which was completed in 1772. Charles moved into Lee Place in 1777, although by 1797, possibly earlier, he was letting it out to Benjamin Harrison, and then to Benjamin Aislabie (the Victorian street at the south east corner of the estate is named after him, albeit spelled ‘Aislibie’) for 14 years from 1809.

Charles died in 1819 and the end of the lease to Aislabie the estate was sold. The site seems to have been sub-divided, which led to its piecemeal development. The area to the north of what is now Lee High Road seem to have been the first to have been re-developed with Lee New Town – small terraced houses mainly for the ‘staff’ for the large houses. By the end of the century Booth described in the notes books for his poverty maps purple – ‘Mixed – Some comfortable others poor’ 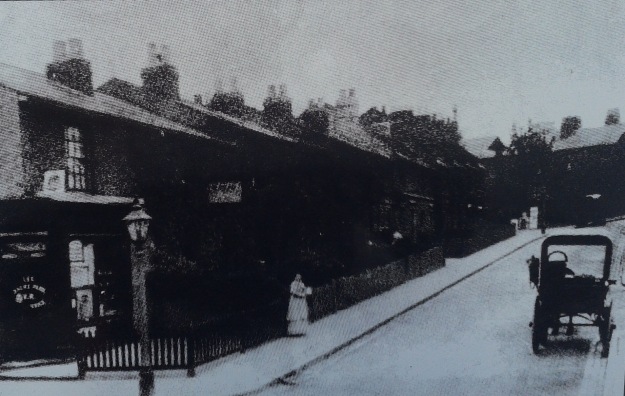 Turner Road (now Dacre Park) on the edge of the ‘New Town’ – from information board by Kingswood Hall Lee High Road was straightened soon after the sub-division of the estate, but the immediate grounds of Lee Place remained as small fields. There were some Victorian shops built along the straightened Lee High Road with a depot for the Cheisman’s store in Lewisham behind them on Old Road. The terraces of Bankwell Road and part of Old Road were built around 1907, and the long gone cinema Lee Picture House, on the corner of Lee High Road and Bankwell Road first opened its doors in 1910. The remainder of the northern side of Old Road and Lee High Road (Market Terrace) to the west of the cinema weren’t developed until the mid to late 1930s.

21 thoughts on “Lee Place – A Stately Home of Lee”