The Manor House in Lee is an impressive building, rightly listed, but amidst the grandeur and beauty it has financial foundations that lie very firmly in slavery – it is a prime example of what has been referred to as ‘dark heritage’

The House was built for Thomas Lucas around 1770, he had lived in Lee for a while, renting Lee Place (on the opposite side of Old Road) from the Boones – it is a ‘country house’ that Running Past ‘visited’ a while ago.

But to understand the history of the Manor House, we need to go back a generation.  It certainly wasn’t the first building on the site – John Roques map of 1746 (1) a quarter of a century before the Manor House was built shows a lot of properties around where it is now located.  It was probably the location of Lee Farm, although there is some uncertainty about this.  Lee Farm seems to have moved around 1745 to become Burnt Ash Farm and the vacated buildings were bought by William Coleman, Thomas Lucas’ uncle, who sought to re-create the old Manor of Lee for his nephew (2)  which had been broken up after the death of Brian Annesley – covered earlier in Running Past.

Coleman was the agent for a number of Leeward Islands plantation owners, notably the Pinneys of Bristol who were who were at that time probably the wealthiest plantation owners in St. Kitts and Nevis. He also jointly owned a plantation in Antigua with his nephew – Roundhill which had 150 slaves.

Thomas Lucas was born around 1720, possibly in the West Country.  He was Treasurer (1764-74) and later President (1774-84) of Guys Hospital and has been described as ‘a wealthy merchant’, much of his wealth came from  joint ‘business interests’ with his uncle in St Kitts in the Leeward Islands, along with the Roundhill plantation with 150 slaves in Antigua.  In his own right, Lucas probably owned land at Barbados Bay in Tobago – which almost inevitably would have had direct or indirect links to slavery.

A Thomas Lucas of this era part owned a number of ships directly involved in taking slaves to the West Indies – while there  is nothing definitive linking him to Lee, there cannot have been many of that name, with sufficient wealth to own a share in a large ship, who had  links to the West Country and who were involved in the slave trade at that time.  One of these ships was the ‘Africa’, jointly owned by a Thomas Lucas and seven others.  It left Bristol in 1774 and its captain purchased slaves at New Calabar (in what is now Nigeria) and then proceeded to St Vincent for instructions on their sale in 1775.  The net proceeds were a staggering £5442, millions at today’s prices.

Manor House was designed by Richard Jupp, a well-known 18th century architect and surveyor, employed for much of his career by the East India Company.  The Manor House is one of a trio of relatively well known south London properties that he designed – the others being the Sevendroog Castle and the entrance and wings to Guys Hospital (1774-77), presumably as a direct result of his work for Lucas  at the Manor House.

Lucas died in 1784 and what happened next in terms of ownership and occupancy is a little confused with some contradictory evidence, although some elements of this ‘confusion’  may relate to the author’s poor understanding of 18th and early 19th century legal jargon.  It seems that the former Lady Lucas let the house to the Call family, Sir John in 1792 on a 61 year lease.  However, he seems to have moved out before his death in Westminster in 1801 – there is an impressive pyramidical family tomb in the old St Margaret’s churchyard. 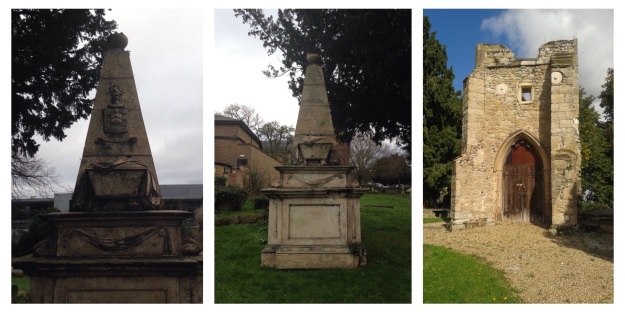 Lucas wife, who later married John Julius Angerstein (someone else who had made money from slavery) and appears to have sold the estate in the 1790s; there is a report of a sale in August 1796 at Garraway’s Coffee-House.  However, to confuse matters there is also the granting of a lease to Sir Francis Baring by the executors of Thomas Lucas in 1797. There are also frequent reports of a sale by a Sir Joseph Paice of the Manor House to Sir Francis Baring for £20,000 in 1796.  This may be the same sale as that by former Elizabeth Lucas, in that the House might have been due to pass to him after her death – there is a mention of him as the reversionary legatee which might point to this. Whatever the chain of events was, the net result was that around the end of the 18th or early in 19th centuries the Manor House became the London home of the Barings – this was certainly by 1801 as John Baring, the 3rd son of Sir Thomas was born there.

Before moving onto the Barings, it is worth touching on Sir Joseph Paice.  He would certainly have known Thomas Lucas as Paice was also trustee at Guys.  While there were no direct links to slavery, the Paice family had ‘trading links’ with Jamaica for produce and crops inevitably produced by slave labour.  Paice was also a childhood friend of Francis Baring – growing up in the same part of Devon, and was to help with the setting up of Barings Bank.

Despite their purchase of Stratton Park in Hampshire in 1801, it seems that the Barings remained at the Manor House, using it as their London base.  Sir Francis died there in 1810 and Sir Thomas lived there for a few years after that, although the family was to own the House for almost another century.

The links of the Barings early wealth to slavery is relatively well known and well documented;  the whole family of that era and before seem to be imbued in the trade.    The graphics below come from the University College, London Legacies of Slave Ownership database – the maroon plaque from the Manor House. 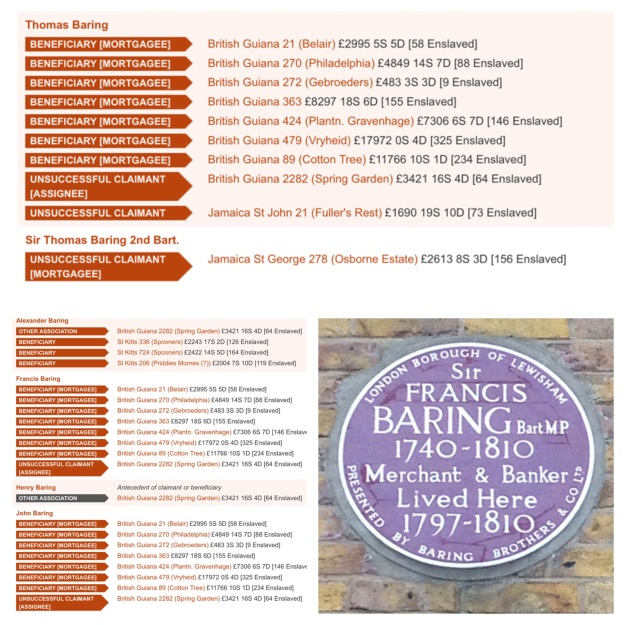 While Sir Francis is said to have made his fortune before the age of 16 based on slavery. While his son Thomas Baring is known to have eventually opposed slavery, unlike his near neighbour Benjamin Aislabie – whose murky past Running Past covered a while ago – his home and lifestyle at the Manor House and Stratton Park were under-pinned by past links to slavery.

Given this past it seems odd that it is a family deemed worthy of a Lewisham maroon plaque without mention of what the ‘merchant’ refers to.   Next week’s post will look at the latter years of the House in private ownership, when the Barings retained ownership but rented the House out.

If you are a current Lee, Hither Green or Lewisham resident, next time you use the park, the library or just walk or travel past and admire Richard Jupp’s fantastic architecture, please at least pause to remember the ‘dark heritage’, to remember the lives of those transported 5,000 miles from New Calabar to injustice and misery in the Leeward Islands, and to remember that it was the enforced and unpaid toil of slaves that largely paid for what you are looking at.  If you live somewhere else, something similar may well apply to your local ‘country house’ too.

26 thoughts on “Slavery and the Manor House”