As regular readers will no doubt recall Running Past has covered many of the former farms of Lee – Lee Green Farm, College Farm, Melrose Farm, Horn Park Park and Burnt Ash Farm.

The land of Burnt Ash Farm had originally been farmed from a large house which was on the site of what is now Lee Manor House.  It was probably not an ideal location for the farm as its land was virtually all to the south – stretching away towards Grove Park.  The move to the junction of what is now St Mildred’s and Baring Roads happened in the mid-1720s (1).  The remains of the original Farm on Old Road were found underneath the library when some building work was undertaken in the early 1980s.

The shift in location to Burnt Ash was by Thomas Butler who came from Dagenham in, what was then, rural Essex (2).  Perhaps as early as 1739, and certainly after Butler’s death in 1751 (3), Burnt Ash Farm was split between two of his sons, Matthew who remained at Burnt Ash and farmed the land south of St Mildred’s Road; and James who was to farm what was to be called Lee Manor Farm.  The land was most of the area bordered by Burnt Ash Road, what is now St Mildred’s Road, the stream Hither Green Ditch until it joins the Quaggy, the river itself and Lee High Road.

The initial site of the farmhouse was to the west of Pentland House (at one stage called Foclallt House) on what is now Manor Lane Terrace and included the site of Lochaber Hall (on the 1860s map above it is referred to as Manor Cottage).  It was a large three-storey house with extensive outbuildings (4).  The land was not owned by the Butlers and, as was covered in a post on the Manor House, was bought by William Coleman who sought to recreate the old Manor of Lee for his nephew Thomas Lucas – funded by the proceeds of slavery.  Lucas inherited the farms on his uncle’s death in 1771.

On James Butler’s death in 1762 it seems likely that the Farm was again managed by his brother, Matthew, from Burnt Ash (5). After Matthew’s death in 1784 the tenancy of the two farms were taken on by Baron Dacre of Dacre House, whose estates were relatively small.  (6) We will return to Dacre House at some point in the future.

Following the deaths of Lord Dacre in 1806 and Lady Dacre in 1808, there were some changes to Lee Manor Farm.  Part of the land bounding Lee High Road was sold to the new owner of The Firs, Christopher Godmond, who had bought the House after the death of David Papillon. (7)

The farm house had be let separately since the 1780s; so when Lee Manor Farm was again let and managed in its own right in 1808, a new farmhouse was needed for a new tenant.  The new farmhouse was built on what is now Manor Lane Terrace, between the current Northbrook and Kellerton Roads (it is shown on the map above).  The bend in Manor Lane Terrace is explained by the location of the farm.   The artists impression of the farm is by Lloyd Roberts (see credits below). 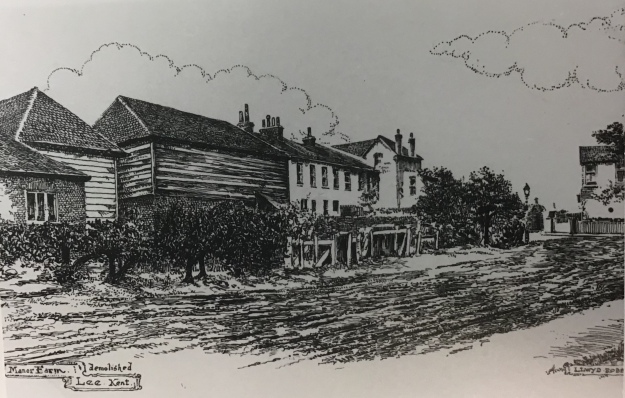 The new tenant was the butler of the new Lord of the Manor, Sir Francis Baring – Thomas Postans (8) – Postans was to stay there until 1816, when he moved on to manage the kitchen gardens of the Manor House to supply the officers mess at St James Palace.  Mr R E Brown was the tenant of the farm for this period but Postans returned to the Farm in the mid 1830s.

There is a fascinating map of the farm from towards the end of Thomas Postans tenure drawn with an east – west axis; Lee Green is in the bottom right hand corner with Burnt Ash Road providing the bottom boundary (the other side of Burnt Ash Road was Crown Estate land) and Lee High Road to the right of the map.  There is considerable overlap between the 1843 field pattern and the street pattern that emerged in the decades afterwards.

In 1845 a lease was granted to Mark Cordwell who hailed from Buckinghamshire; oddly he was listed as a seaman in the 1861 census with with his 20 year old son, Charles, born in Greenwich, noted as as the farmer.  Mark died in 1864.

By 1881, Charles had married Mary (née Peasnell) who was from Buckinghamshire, like his father, and had eight children and a servant living on the farm; the farm was listed at 150 acres in the census. They may have had a bailiff or manager running the farm for them for a while in the 1870s as three children were born in Shoreham in Kent.  In the 1871 census they were listed at Prestons Farm House  in Shoreham.

They were back in Lee in 1891; but by the 1901 Census, Charles was listed at 35 Medusa Road in Catford as a ‘retired farmer’ with his son and daughter in law.  He may have emigrated to the USA as the last record for him is sailing to New York on the Philadelphia in 1906.

While he may have moved to America, his name lives on in the 1970s council housing that was developed to replace the southern side of Northbrook Road and land behind Kellerton Road – Cordwell Road.

The end of the farm coincided with the gradual sale of of the Northbrook estate from the 1860s onwards.  One of the main builders from the mid 1890s were the family firm W J Scudamore.  Their developments included what they referred to as the Manor Park Estate (roads such as Kellerton Road, parts of Manor Lane Terrace, Redruth Road (now Manor Lane) and parts of Manor Park.  It seems that the old Manor Farm came as part of the lot; most developers would have probably demolished the buildings and built over it.  However, the Scudamores decided to retain the building as a family home – which it remained as until the 1960s – there is a little more on this in the post on W J Scudamore. 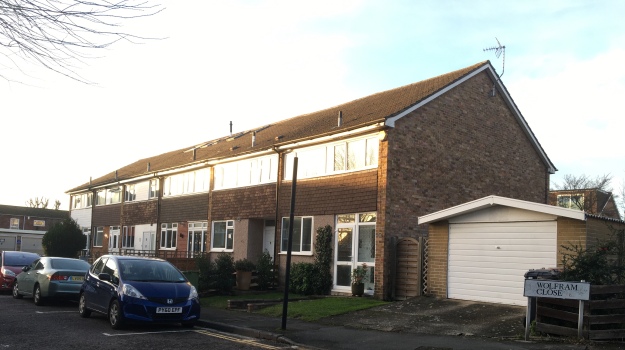 The last of the Scudamores to live in Manor Lane Terrace was Elizabeth (née Drane) who died in 1961 aged 90.  After her death, the house and the land around it were acquired for council housing – although all the homes appear to have been sold under Right to Buy.  The name Wolfram Close is presumably a reference to the last tenant of the Manor House – the slightly differently spelled Henry Wolffram.