Trinity Hospital claims to be the oldest building in Greenwich; built in 1613, it pre-dates Inigo Jones Queen’s House by three years.  The benefactor was Henry Howard, Earl of Northampton and the Hospital, which is an almshouse, was built to provide shelter for 20 ‘Poor Men’ plus a warden. 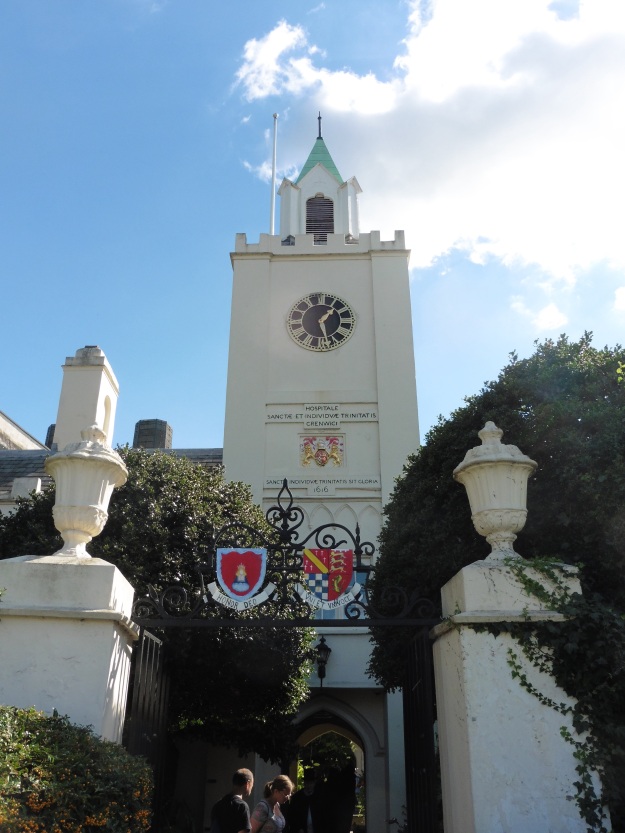 The Hospital has a slightly monastic feel with a small cloistered courtyard, the original rooms were little more than cells but the 21 rooms were converted into one bedroom flats following a refurbishment in 2008.

The building itself had a makeover in 1812 with changes to the clock tower and the front stuccoed and capped with a castellated parapet.  Apparently the original south facing elevation was retained – this wasn’t accessible when I visited, although the pleasant garden which it looks out onto was – it is crossed by the meridian.

The building is somewhat dwarfed by the adjacent Greenwich Power station, although a little less so than when the latter was built in the early 1900s, as following objections from the Observatory the chimneys were lowered by around 20 metres.

Of the original 20 ‘Poor Men’ (plus a warden) 8 came from Shotesham in Norfolk, where the Earl of Northampton was born, and 12 from Greenwich.

The hospital was not open to everyone, there were strict guidelines about the suitability of ‘Poor Men’ to live there, including being at least 56 years old, not being a beggar, drunkard or ‘whore hunter’ and an ability to recite the Lord’s Prayer unaided.

While the environment is now a little more relaxed, the original ‘Poor Men’ lived a very regimented lifestyle,

9 am: service in the chapel (or St Alfege Church, presumably the medieval one rather than that designed by Hawksmoor, on Wednesday and Friday).

Until 11 am: Free time (although they were expected to do gardening and housework)

There were also a series of ‘orders’ about acceptable behaviour issued by the Warden many of which were displayed in the cloisters when I visited – ranging in subject from forbidding the ‘Poor Men’ from going to ale houses and the like, wiping feet and when gates should be closed.

Interestingly, the ‘Poor Men’ had a voice in key changes at the Hospital – 10 of them (along with two Senior Wardens from the Mercers Company) needed to agree to any decision involving use of the seal in relation to ‘any lease, grant or other writing whatsoever concerning the estate of the hospital.’

Trinity Hospital is only open once a year, as part of London Open House, and for the last few years just on the Saturday, it is well worth a visit though.