The prolonged spells of dry weather such as those in June and July 2018 same months in 2022 dries out the top soils in many areas and made visible archaeological remains of past buildings. In 2018 it enabled the likes of the flooded village of Mardale Green to be visible again, along with various ancient settlements in Wales.  A little more recent, and a lot nearer to home, are footprints of prefabs that appeared in Hillyfields and possibly on Blackheath too.

The Blitz and the later V-1 and V-2 rocket attacks had destroyed thousands of homes in south east London. – thousands were homeless, staying with families and friends. The main plank in trying to deal with this was the Housing (Temporary Accommodation) Act 1944, which planned to deliver 300,000 prefabricated homes.The old Borough of Lewisham put up 1,610 prefabs by 1948 and a further 1,088 by 1955. While many went on quickly cleared bombsites – such as those in Fernbrook Road and Lenham Road – parks and open spaces were often used. On the Greenwich side of Blackheath, open space on Pond Road in Blackheath was used but more significantly several parks saw significant concentrations of prefabs. Notable in this was the Excalibur Estate (pictured below) which was built on part of the Forster Memorial Park – the estate partially remains although a stalling redevelopment programme is underway. The Excalibur estate (below) was covered in an early post in Running Past. There were also big concentrations around the edge of Hillyfields as well as in a couple of locations on Blackheath. 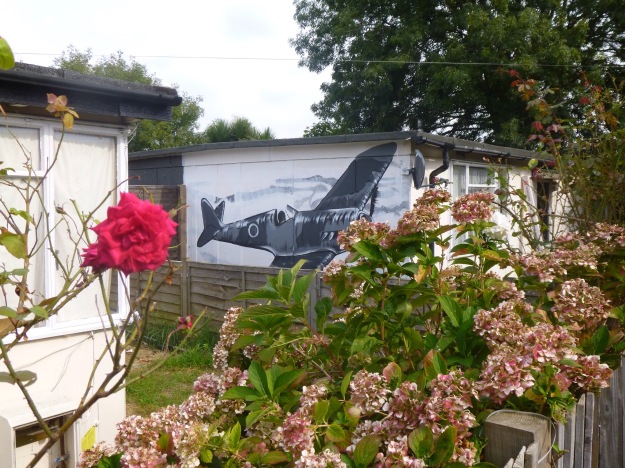 As the 1949 surveyed map that included Ladywell shows, the open ground of Hillyfields was circled with prefabs – Hillyfields Bungalows – with a double row along Adelaide and Montague Avenues, and a single broken line on Hillyfields Crescent.  A number of different types of prefabs were used – the ones here were Arcon bungalows – somewhat different in shape and design to those at Excalibur.

They were certainly there until the early autumn of 1962 as there is cine film footage of them, although there are suggestions that residents may have been moved out before the winter as there are recollections of playing in the remains of the prefabs in the harsh winter of 1962/63.

The extent of the compaction of the ground caused by the foundations means that the ground dries out more quickly than the surrounding around and so sometimes makes the footprints of the prefabs visible from the air.  The Google maps satellite images, probably taken in the dry spring or early summer of 2011. – the top one of Adelaide Avenue, the lower of Montague Avenue. 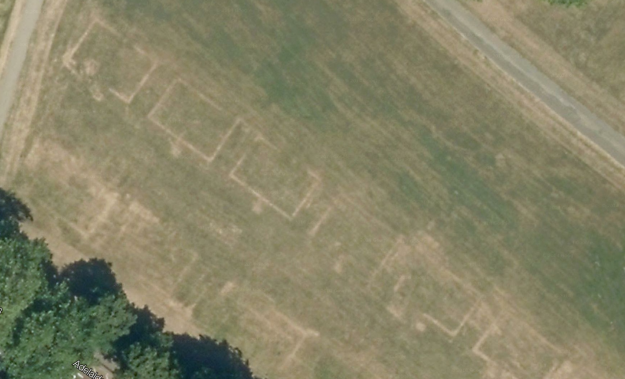 They may have been visible on the ground at that point but the 2018 has made them a lot clearer than in previous years as the set of photographs below shows – the top pair are of the Adelaide Avenue prefab bases, the bottom trio are of Montague Avenue and Hillyfields Crescent.

Before leaving Hillyfields, the Ordnance Survey map above indicates a series of Nissen huts close to the tennis courts.  They probably related to search lights (there were search lights there in World War 1 too).  There was nothing visible on the ground in the drought conditions – a combination of post-war trees and play equipment have disturbed the surface too much.

Alongside St German’s Place on Blackheath there was a double row of prefabs as the photograph from Britain from Above shows the edge of in the bottom left corner,

The extent is clearer from the 1949 surveyed Ordnance Survey map.

Unlike the position at Hillyfields, the post demolition outlines never seem to have been visible from the air – Blackheath has seen more more earth movement over the years than Hillyfields (apart from the former brick works around Hillyfields Crescent).  Non-natural soils have been added to the edge the grass, while the mounds look impressive in flower they will cover some of the remains of the prefab footprints.

A recent drain edges the Heath a metre further west than the mound and then beyond is a tangle of long grass. There are a couple of outlines that might be the base of a bungalow but it could easily be something else.

In the top corner of the aerial photograph above another, larger, group of prefabs is present at the south eastern edge of the Heath, adjacent to what is now the Territorial Army Centre at Hollyhedge House – looking  beyond them is Lewisham, almost unrecognisable without the tall buildings. 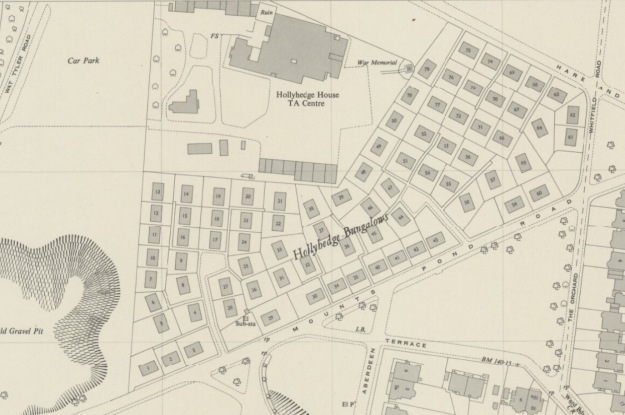 There appeared to be nothing obvious visible on the ground when visited – a combination of lots of earth movement on the Heath in the relatively recent past and confusion of lines caused by tyres – no doubt due to the obstacles of the Race for Life Pretty Mudder race the Sunday before – the grass will recover quickly from that, once it rains. 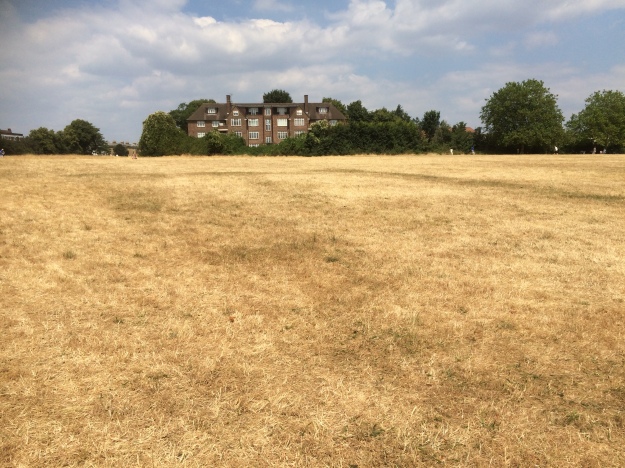 Not every bomb site was developed immediately for prefabs – as Running Past has already covered , sites at Campshill House and Lewisham Hill were developed for new council housing almost straight after the War – the final photograph below shows both Lewisham Hill estate (2/3 way up on the right) as well as Hollyhedge Bungalows at the top.

The modern aerial images are from Google Maps – copied during 2014

The map images are on a Creative Commons from the National Library of Scotland – the full images are via links for Hillyfields; St German’s Place and Hollyhedge bungalows

12 thoughts on “The Ghosts of Hillyfields & Blackheath Prefabs Past”