The Sultan was a Lee High Road pub on the corner of Clarendon Rise which was demolished in the early 2000s and is now (2019) a Nandos with four floors of flats above. This post attempts to tell the story of the pub whose drinkers included on occasion John Cooper Clarke and Siouxsie & the Banshees.

There have been two pubs on the site; the first seems to date back to around 1825 (1) and predated the development of the College Park estate on the opposite side of the Quaggy. When built, there was no bridge over the river at that point – this seems to have come as the estate behind was developed. Little is known of the first incarnation until its latter years other than the Lord of the Manor omitting to collect the rent so the tenant obtaining the title (2).

While the unknown tenant may have taken ownership, the beer house seems to have been bought by Courage at some time in the 1860s and 1870s; it was reported in 1870 that they had given a 17 year lease to Ambrose Paine who had gone bankrupt.  His mother, Elizabeth had asked to take over the tenancy but was refused and Courage took them to court to gain vacant possession (3).

Robert Janes, born around 1825, was the landlord during the 1870s – in 1871, he and his wife, Martha and five children were living over the pub, and unlike many other local pubs of the era there were no live-in staff. A decade earlier and he’d been a butcher living on Lewisham Road, close to Blackheath Hill.  It was a trade that he’d carried on in Lewisham in 1851. 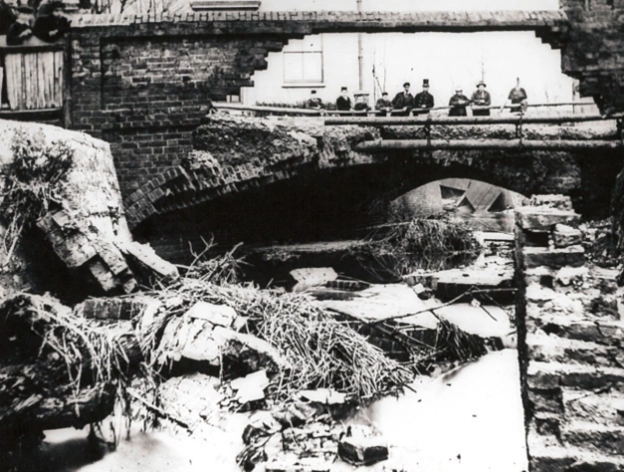 The Quaggy which runs behind the site flooded badly in 1878 – the picture above shows the damage a few hundred metres upstream at Eastdown Park.  The flood  seems to have seriously financially damaged Janes – it was the third time in his stewardship that it had flooded and unlike neighbours, who had some financial relief from the parish, Janes got nothing – he posed the question in the local press as to whether it was ‘on account of my being a beer house keeper?’ (4).

The letter may have had an impact though as a new gully was constructed to try to protect the cellars and they escaped flooding in August 1879 (5).

The next name above the door was that of Frederick Waghorn from the spring of 1880 – Frederick put out adverts in the local press advertising ‘wines and spirits of the finest quality’ at The Sultan in (5).   Frederick was noted as being a plasterer in the 1881 census, so it was presumably Sarah who was running the pub its early years.  Frederick died in 1889.

At some stage in their period at The Sultan, the beer house was rebuilt (7).  Throughout the period that the Waghorns were there, the new building was split with a shop front on the corner of Clarendon Rise – as the mid-1890s Ordnance Survey map below shows. Between 1886, and probably earlier, the occupants of 16 on the corner were fruitiers, initially Thomas Longhurst but from 1888 to the end of the first decade of the 20th century Walklings, although  variety of others used the site too.

In the early days the of the Waghorn tenancy the Sultan was also home to the Lee and Lewisham Harmonic Brotherhood, who held a quarterly supper there (8).

After Frederick’s death, the licence passed several times between family members – initially it was Sarah’s name on the brass plate (9), but it was transferred to her son Walter in 1896 (10).

However, it was back in Sarah’s name by 1904 as she was found guilty of ‘selling intoxicating liquor to a drunken person’ (11). She was back in court for the same offence the following year but with a much larger fine of £2 with costs (12).  The pub is on the right hand side of the photograph below from Lee Bridge from around this era, although its ‘sign’ isn’t that clear. 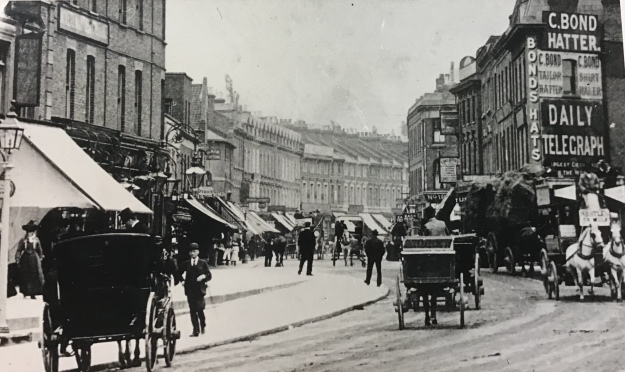 By 1911 George Craddock was pulling the pints at The Sultan, he was a Bermondsey boy, helped by his wife Alice – they’d probably been there a couple of years as their young children were born in Lee. George came from a family of pub landlords – his father was running Blackheath’s Royal Standard in 1901, and a decade before the City Arms in West Square, Bermondsey. His older brother, Thomas, ran the Woodman further up Lee High Road.  George stayed at The Sultan until the late 1920s.  It seems that it was under his stewardship that The Sultan took over the shop front next door, around 1925. It seems that he moved onto a different pub – in the 1939 Register he was listed as a Licensed Victualler, living in Upwood Road although it isn’t clear which pub he was running.  He died in Lewisham in 1967.

By the 1930 Kelly’s Directory it was listed as being run by Richards and Sons. Nine years later, when World War 2 broke out the landlord was, Leonard Orves who lived some distance away in Ronver Road.   W J High was the landlord in 1945; succeed by his wife or daughter Ellen in 1950.  Beyond the 1950s while the pub is listed in Kelly’s Directories, the name of the landlord is absent,

Roll forward 50 years, the pub had a mixed, but overall positive, review in the News Shopper in 2000; their Pub Spy described as a ‘curious little gaff’ which ‘doesn’t exactly look welcoming from the outside.’ It had an ‘Under New Management’ sign – usually subtext for past problems which may or may not have been dealt with.

The décor was mainly dark wooden panelling, the public bar complete with pool table was empty although the lounge at the rear was busier and noisier with rock ‘n’ roll and reggae from the jukebox.  The review summed the pub up as

The Sultan is not a good bet for young groups on the razzle, or even an ideal family boozer. But it is a pub for friendly, real people who enjoy their drink.

The new management didn’t last long though, as in October 2002 planning permission was granted to demolish and replace The Sultan with a 4 storey block of flats and a restaurant – presumably the well-known purveyor of peri peri chicken, Nando’s, had been lined up by the developers before their submission.  Its neighbour is the stunning London Sivan Kovil Hindu Temple, just visible behind.

With most of the Lewis ham and Lee pubs that have disappeared there seem to be fond memories on-line, these were included for posts on pubs such as the Woodman and New Tiger’s Head further up Lee High Road and the town centre pubs The Plough and The Roebuck.  Sadly, with The Sultan there are few memories, even fewer than for the largely unlamented loss of the Prince Arthur at Lee Green.  Even a photograph proved tricky to find – it wasn’t clearly photographed in any of the boxes of photographs of Lee or Lewisham at Lewisham Archives.  The nearest was a photograph taken from the Lee Bridge (see above) the junction of Lewis Grove, Belmont Hill and Lee High Road.

I have no fond memories of the Sultan either – I can only remember going in once, and that wasn’t planned.  Sometime during 1993, I had been into Lewisham with my toddler son in a buggy and was confronted by a low-speed car chase – the pursued car had come out of Clarendon Rise, had mounted the pavement in a vain attempt to evade the traffic backing up at the junction of Belmont Hill and Lewis Grove.  The narrow pavement was busy so the driver slowly inched towards the Clock Tower.

I took evasive action and pushed the buggy into the Sultan’s lounge; I was met by a small, slightly unsteady stampede coming the other way of drinkers, glasses in hand, eager to find out the reason for the siren and flashing lights.  The Sultan wasn’t the most inviting pub lounge I’ve ever been in – dark and a fug of smoke so thick that the bar was a little indeterminate in outline.  Outside the excitement swiftly abated; the police pursuers had quickly arrested the driver who had come to a halt when a lamppost blocked his path.  The drinkers retreated back into the boozer and we returned to the healthier atmosphere of the heavily polluted Lee High Road with the young driver being led away by the constabulary.

While I have no fond memories, David (see comments below) most certainly did from the late 1970s and early 1980s

I drank here from 1977 to 81. I lived up the road in 35 Gilmore road. It was run by Dougie an ex boxer, who everyone called Dougie Sultan. He would punch any drinkers who misbehaved. He was short but shaped like a barrel. It was a real dive but tolerated any drinker who behaved. We were punks and art school kids and unwelcome in most pubs, but not the Sultan. As a consequence at some point it hosted for a drink Siouxie and the Banshees, Swellsie the pink poet, John Cooper Clark and many others.

A featured drinker was a council worker called Sid who resurrected knocked over lampposts. He used to sing a song at the to of his voice – “I am pissy Sid from Sydenham Hill, never worked and never will”.

The Sultan- to its credit, was significant in the “Battle of Lewisham High Street”, when the National Front marched through Lewisham – by joining forces with the Kebab shop opposite (the Bogaz Icci) to drive the fascists out.

As with other ‘lost pub posts’ on Running Past, it would be good to be able to add in some other memories into the post. If you worked there or drank there tell your story – who were the characters that were regulars at The Sultan? What about the landlord, the staff, the atmosphere, recollections of the friends and the memorable nights.  You can use your Facebook or Twitter login to comment here, first comments here get moderated before they appear though.  If you found the post via Facebook, you can write your recollections there.  I will update the post with the memories.  Please don’t put anything libelous or that might offend others though…..

5 thoughts on “The Sultan – A Lost Lee High Road Pub”